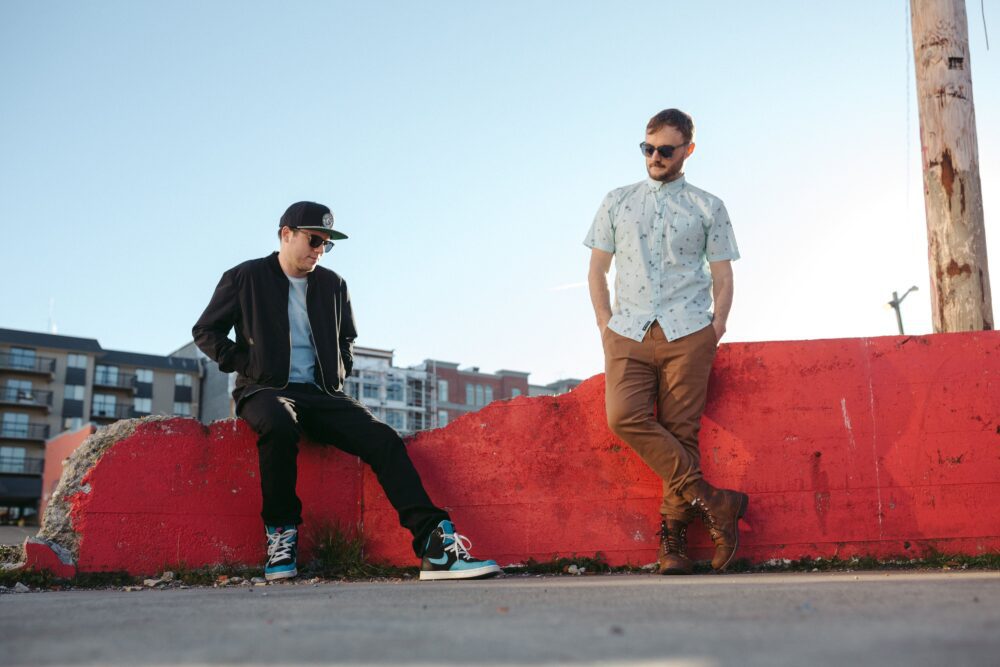 Prior to the pandemic, The Funk Hunters shared the stage with GRiZ on his Ride Waves Season 2 tour, worked on the Big Gigantic album, and received CIMA’s (Canadian Independent Music Association) Road Gold certification.

During the lockdown, the twosome has kept busy, writing new music, live streaming, connecting with fans via Twitch, and spending time in the studio. Still, they’re eager to get back on stage again, performing live shows for their fans.

Muzique Magazine spoke with The Funk Hunters to find out more about the personalities behind the contagious music, how they hooked up with Defunk and Akylla, and what’s next for the duo.

Hey guys (The Funk Hunters), thanks for taking the time. For those of our readers who might not know you, who are you guys?

We are Nick Middleton & Duncan Smith, an electronic DJ / production duo based on the west coast of British Columbia. We’ve been making funky music and touring the world for over a decade.

Tell us about your new song “Warn Ya” – this being the first release of the year for you guys .. has got to be a really big deal right?

It’s a big deal for us too because we actually wrote the song almost two years ago. It was road-tested at festivals through the end of 2019 and set for release almost exactly a year ago, for Spring 2020, and then suddenly COVID hit. So after a year of waiting to release it in the hopes touring would start up again we are just excited to finally release this one! Our fans have been messaging about it ever since we played it on our last tours pre-COVID and it’s really become a song we are proud of. Sherry (Akylla) and Logan (Defunk) are both great friends who we’ve collaborated with before in the past on different projects, so it’s exciting to share this song with them and finally see it get released. We’ve got a music video being finished up soon for it that will come out in a few weeks too!

Defunk and Akylla are both Canadian like yourselves. Do you feel like you’re putting Canada on the map with this collab?

It’s always a special feeling to work with friends on a song and even cooler that this song is 100% Canadian. We mixed at our studio here in Canada, all 3 of us (Akylla & Defunk) are Canadian, and it’s coming out on our Record Label that is Canadian too (Westwood Recordings), so that’s exciting for us to be able to push other Canadian friends and talent for sure!

Between working with Griz, Big Gigantic, and more, you’ve really worked with a ton of fan favorites. What would you say is your favorite accomplishment so far?

Doing direct support for Griz’s national tour at the end of 2019 was an incredible experience.  The level of production & artistry on that tour was so inspiring.  We did 27 shows from coast to coast in America in just over a month in all 2000 – 8000 person venues!!  During that same tour we also flew to Red Rocks to perform with Big Gigantic and played some other festivals the month prior including our first performance at Life Is Beautiful in Vegas, so ya that was definitely one of the highlights for sure!

In your opinion, what differentiates the Canadian music scene from the American one?

Mostly just the size.  Canada has so few big markets for touring while America can sometimes feel endless with the number of cities with vibrant music scenes! I think with 1/10th the population it kinda makes it that more special to us when we are performing at festivals in the US with our Canadians on the lineup or getting to take our friends from Canada with us on tour. We also just have a really strong festival culture up here in Western Canada because of long-running events like Shambhala and BassCoast that our American friends are always really blown away by, so there is definitely some pride in being involved with these events and helping put Canada on the map!

So what kind of artists are you listening to at the moment that inspire you?

In the electronic realm so many of our peers continue to inspire us.  Opiuo, Stickybuds, Marten Horger, Moontricks, Clozee, Griz, & K+Lab just to name a few.  But that list could go on forever when we start thinking about the friends we are surrounded by and collaborate with.  On the live side, we love Kharugbin, London Grammar, Leisure, Fat Freddy’s Drop, Leon Bridges!

Why do you make music? If you weren’t making music, what do you think you’d do?

We both have backgrounds in film, so if it wasn’t music, we’d probably be working with some form of visual media! But I think once you get the music bug – whether it’s making music, performing music, or just being a fan of music – it sticks with you forever!

How have you handled the coronavirus situation?

I think just adapting rather than waiting for things to go back to normal. We’ve transitioned our touring into live streaming and have really connected and grown our fan-base more than we could have imagined in that space. Being off the road has allowed for more studio time as well!

We’re excited to get back out on the road again…whenever that happens… 2022 for sure, maybe the end of 2021 if we are lucky… and reconnect with fans in person. But honestly, there has still been a lot of positives this past year, we’ve connected with our fans in an entirely new way through Twitch and live events online, and been working on a ton of exciting new projects at the label, lots of new music and collabs, and even finishing up our very own sample pack for Splice that will come out later this year too!

Interview: Sharon Hendrix Chats About Laura Nyro, ‘La Boheme,’ and How To “Hold On”
David Vaters Releases Splendid ‘A Voice In The Wilderness Volume 3’
Advertisement