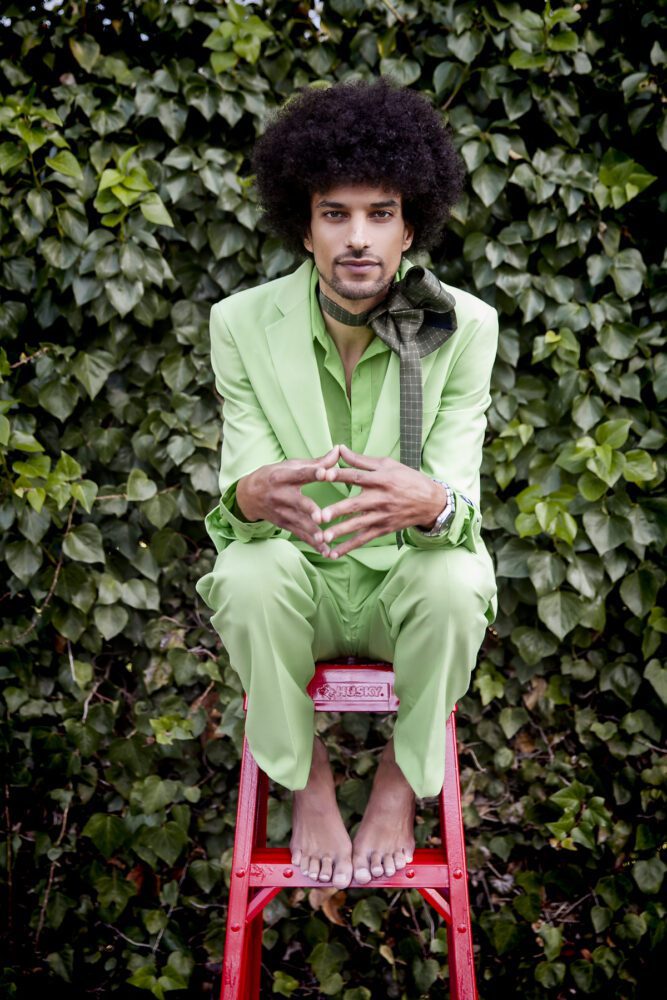 While growing up in a musical family, both his parents are singers, Corey began singing when he was 11 years old, followed by performing professionally two years later at age 13, singing with Barry Manilow in Las Vegas. At age 14, he founded and fronted the R&B group Envy, which shared the stage with Mýa and Destiny’s Child.

In 2003, he was a principal performer on American Idol, finishing in the Top 10 and appearing on the cover of People Magazine with features in New Music Weekly and US Weekly, along with myriad mainstream publications around the world. His music hit the top spots on multiple charts, including Billboard.

At the moment, Corey is repped by Honeybee productions, with projects including a book publishing contract and his forthcoming sophomore album, distributed by SM1 Music Group, CDC MUSIC LLC, and Sony/The Orchard.

Muzique Magazine spoke with Corey Clark to discover more about how he got started in music, his influences, and the inspiration for “Naughty Boy.”

My Faith; My Family; Music

How Genuine my music is and the quality of the content. I believe my music is unique, in so much as I simply record what feels good to me at the time. In spite of genre, and therefore, I am free to create. I’m not boxed in. Not in my ethnic heritage, nor in my music. And I am very proud of both.

My Mother and Father are musicians and so, I grew up in a musically inclined household with these amazing people. They were singing in a 9-person Choir for several years for Barry Manilow in Las Vegas, NV. A member dropped out and the musical director for Barry’s show; Debra Byrd, needed a replacement. (Debra Later went on to become musical director for American Idol for many years, including season 2) So my Mom and Dad took me down to audition for Debra when I was 13 years old and, I nailed the audition. Debra hired me on the spot. I spent the next two years performing background vocals with my parents and Debra for Barry Manilow, who had a sold-out show every single night. I was hooked after that.

My Mother and Father, of course, Jan and Duane Clark. Before I became a 2X R.I.A.A. Certified Gold recording artist while on RCA records briefly, my Father was also an artist on the RCA Label in the late ’70s. As they say, the apple never falls too far from the tree. I also love Prince and Michael Jackson, so much so that my children’s mother and I chose to name one of our three children after the both of them: Lyam Prince-Michael. I also enjoy Steve Perry and Donny Hathaway, Don Henley, Boyz II Men, Elton John, and Brian McKnight, to name just a few of my favorites.

Right now, I’m listening to this amazing M.C. out of Chicago who goes by the moniker Add 2. He’s nice. I really like Olivia Rodrigo’s song, “Driver’s License,” it’s such a simple and yet simultaneously passionate and genuine song. She knocked that one out of the park. I also love listening to Ajia Clark, Ed Sheeran, J-Cole, K.D. Clark, H.E.R., and Skunkdub. I’ve also been listening to a lot of Chick Corea lately, may he rest in peace.

Outside of my management, Honeybee Productions, you mean? Well, I wanted to try something new, outside of my normal wheelhouse and comfort zone. So I got together with a friend of mine, Casper Redson, and we wrote what felt to me like a reggae-inspired style of melody and then lyrics. After that was complete, I got with these amazing musicians, Skunkdub, Randy Ramirez, and Chris Halo, to build the musical side of the composition, around the melody and lyric structure Casper and I created,  but I wanted it to be live, not digital. They each recorded their instruments as a live band and we ended up with this great song, “Naughty Boy.” I’m extremely proud of this song and the people who worked on it with me.

How did you hook up with Casper Redson?

Your sound is difficult to categorize. “Naughty Boy” features a cool reggae vibe, while “Protect Me” offers gritty rock flavors. Is your sound evolving in any particular direction?

Well, thank you, first of all. I’d have to say, yes. Not on purpose, more out of intent to grow and progress. I feel a lot freer these days to just do me. Which I humbly believe is what’s allowed my music career to continue. The ability to adapt and reinvent myself. Not getting pigeonholed into one sound. This is really who I’ve always been, I come from a very eclectic and quality saturated background. Moving a lot growing up helped my ability to adapt to new people and new things. I’ve just developed the confidence to explore what my spirit is singing about now, as opposed to what someone is telling me to sing. And I kinda like it.

I love driving while listening to jazz music when I’m in traffic. It’s so soothing and calming, helps deal with the anxiety of wanting to get home.

I do not know. I can’t really put what it makes me feel into words, because they would be inadequate.  But if I try, I’d say because I cannot help myself. I feel a drive in my heart and soul daily, to be creative. I believe in The Creator of everything, and I believe that entity blessed me with the gift and desire to sing and write music and entertain, to be able to share that gift with the world. Music is powerful and, when used for good intent, it touches and helps more people than anyone could ever possibly understand or truly know. I also believe there’s an element to our industry today that’s solely and purely focused on money, which is material, and not quality music, which I believe flows from the spirit. Music used to just feel great as a whole. And now, not so much. So I believe it’s my duty to inject as much of that which I seek to hear and see, back into my Industry and out into the world myself, and do my part to let people know that there’s still more to music than what the mainstream is currently giving us.

Only The Creator knows for sure. And until that entity fills me in on it, I’ll be over here following my heart and dreams while working on and releasing new songs and material as much as I possibly can. With “Naughty Boy” making it to #53 on the Top 40 Radio charts thus far, thanks to the efforts of Mr. Rosen and his team and my team at Honeybee productions and CDC Music LLC, it’s a great achievement so far, but I’ve got more work to do ahead of me to keep the momentum going. I’ve got a second album coming out that’s also going to be distributed by SM1 Music Group/Sony Music/and powered by The Orchard, which was produced by the late Great Stantronik (Stanley Washington).  So I’m really excited about that project. I’m helping my Father and Mother release some of their material as well. My heart is almost full. Almost.