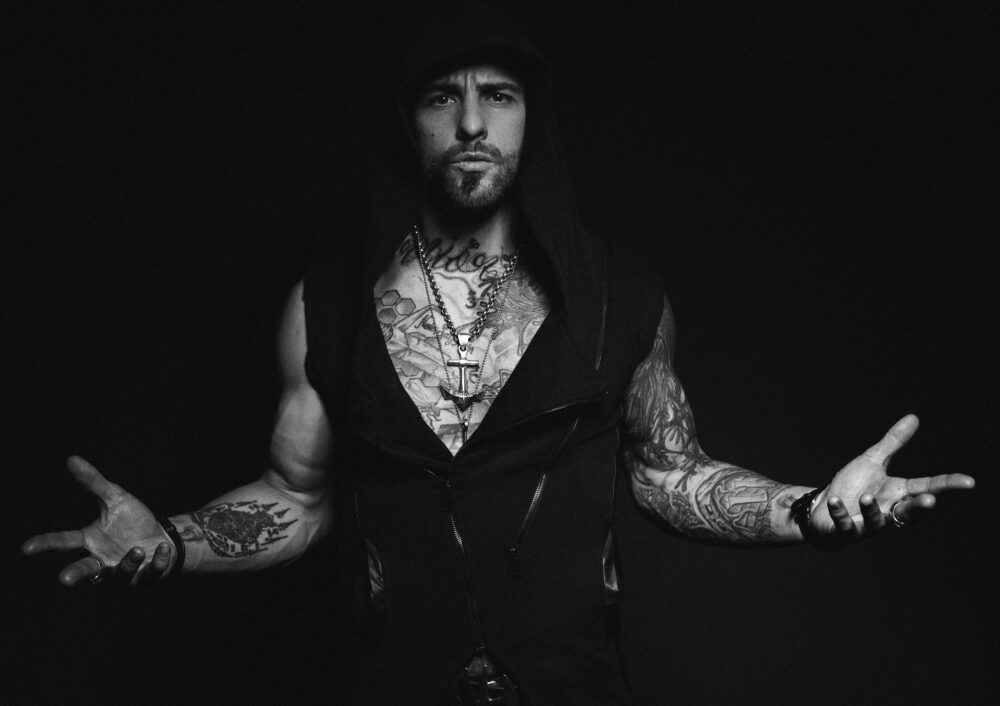 Rapper, actor, and author Nick Hawk recently released his single/music video “You Can’t Talk As Much Shit As Me.”

Which is true, except Nick doesn’t need to talk shit. His accomplishments say it all: Air Force veteran, college graduate, producer, TV star, author, Brazilian Jiu-jitsu black belt, and rapper. If you want a complete rundown, you can read it here.

From one perspective, the most impressive thing about Nick is his transition from “having little money and being scared of my shadow” to where he is today – self-assured and successful.

From another perspective, Nick impressed the hell out of us when he says, “I wanted the video to show heart and soul, not making money rain, ‘bitches’ dancing, and poppin’ bottles. I don’t understand how that stuff can be appealing to anyone anymore. That shit is so played out, stupid, and crippling.”

Muzique Magazine sat down with Nick Hawk to discover more about his life, his music, his success.

When did your career as a musician begin? What’s the backstory there?

I really wanted to be in a band with other kids but I didn’t fit in. I suffered badly with my confidence so I only had the option of doing stuff on my own and I went the solo rapping route. When I discovered the horrible soul-sucking drug alcohol, I got the courage to rap at bonfire parties in Wisconsin, where I grew up. From there I started freestyling and doing rap battles at parties. I never took it super seriously or called myself a rapper until I auditioned for my TV show Gigolos. Then it was really time to rap. I had a couple of weeks to put together a song and that’s how my first released track “Gigolow” was born.

What’s a song you’d be belting out while driving down the highway on a sunny day – windows down?

I listen to very little music these days. I don’t want it affecting mine. Mine is special and I want as little influence as possible from elsewhere. Our heads are way too filled with music. If we spent more time in silence, we could appreciate it more. I split my driving time with social media, silence, and audiobooks. I might throw on some Tom McDonald when I work out.

What bands/artists, in your opinion, are killing it right now?

Well, Tom has become one of the top rappers on the planet. If you don’t have a message, you’re not killing anything.

Where did you get your tattoos done? Any artists deserve a shout out?

I highly recommend going to my homie Chad, at his shop, Affinity Ink, where he also sells amazing crystals. NOBODY does cleaner work. He did my mic plug-in on my neck, cave drawing tattoos, my Odin ruin, Valknut, cobra, hand gavel, my “not lucky” tattoo, and more.

Can you explain your songwriting process?

I usually need a well-constructed idea or a perfect title to begin. Once I have that the rest flows right out of me. True artists need to pride themselves on appropriately setting the mood and tone through all of the writing and production. Too many fail in trying to make something sound cool or trendy.

Do the rhymes come first, or the music?

What inspired your new single/music video “You Can’t Talk As Much Shit As Me?”

I’m over shit talking. I have nothing more to prove. I won.

How was the video conceived and shot?

I wanted the video to show heart and soul, not making money rain, “bitches” dancing, and poppin’ bottles. I don’t understand how that stuff can be appealing to anyone anymore. That shit is so played out, stupid, and crippling. We are waking up and I am helping.

I’ll give you one guess.

What can you share about your third album, Nick Hawk Vol. 3?

“Third” – It will be Nick Hawk, but definitely elevated Nick Hawk. Everything I do will be better than the last. There is no limit to our capabilities. I have recently given up wearing black and I’m no longer swearing or using vulgar words. Only high vibrational music here forward.

Will you be performing live when the clubs open back up?

I have a performance booked in LA and I’ll be performing during a fashion show in the fashion district. I’ll be releasing more information on that soon. I’m considering a tour and also performing on Fremont Street or starting a Vegas show. I definitely want to do a large festival someday. I have two killer songs coming, “Choose Me” and “We’re Still Winning.” I started shooting the video for “Choose Me” yesterday.