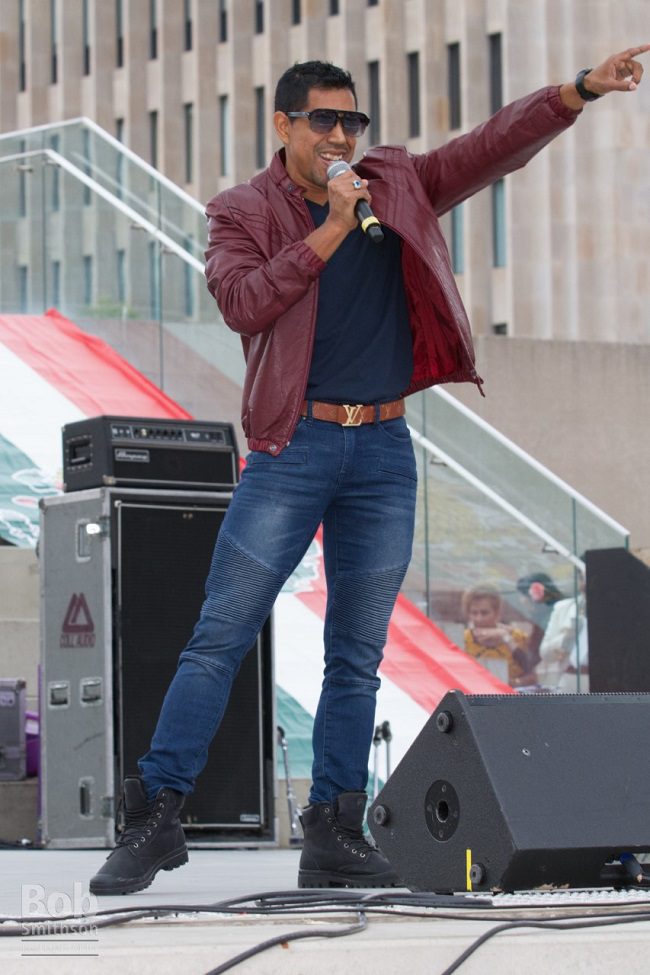 I had the pleasure of watching Davalenco, the Mexican Reggaeton recording artist perform live in Toronto on September 15, 2019, at the Nathan Phillips Square. The event was Viva Mexico! where Mexican Canadians celebrated Independencia Mexicana or Mexican Independence day. Davalenco emerged in 2017 with his Latin album “Ritmo Latino” which featured a mix of various Latin songs in the rhythm of rumba, cha-cha, and salsa. Shortly after he had success with the Remix of “Ritmo Latino” with DJ Ice a DJ that specializes in Latin dance music. Dancers all over the world dance to the intoxicating rhythms produced by Davalenco and DJ Ice including at international dance competitions.

But premiered at the Viva Mexico! Festival in September was the artist’s new single “Otro Intento” which was released in September 2019. It was written and produced by Davalenco himself. It is a song with an urban reggaeton feel and rhythm. It is a piece about a couple trying to work through the struggles of their relationships. Reggaeton music is a combination of the classical Jamaican Reggae and Latin American rhythm. “Reggaeton is a younger genre which originated in the clubs of San Juan, Puerto Rico in 1991.

It became known as “underground” music, due to its circulation through informal networks and performances at unofficial venues. DJ Playero and DJ Nelson were inspired by hip hop and Latin American music to produce “riddims”, the first reggaeton tracks. As Caribbean and African-American music gained momentum in Puerto Rico, reggae rap in Spanish marked the beginning of the Boricua underground and was a creative outlet for many young people. By the mid-1990s, “underground” cassettes were being sold in music stores. The genre caught up to middle-class youth and found its way into the media.

By this time, Puerto Rico had several clubs dedicated to the underground scene; Club Rappers in Carolina and PlayMakers in Puerto Nuevo were the most notable. Bobby “Digital” Dixon‘s “Dem Bow” production was played in clubs. Underground music was not originally intended to be club music. In South Florida, DJ Laz and Hugo Diaz of the Diaz Brothers were popularizing the genre from Palm Beach to Miami.” (Wikipedia)

Dressed in distressed jeans, burgundy leather jacket and fashion sunglasses Davalenco electrified the crowd – they were elated to see him. With his undisputed charm, he worked the stage as he sang and was everywhere all at once. He is a natural-born performer and thus his live performances are full of zest and energy.

He displayed his remarkable operatic voice control in the middle of the song reaching amazingly high notes. During his performance, there were many spectators and couples that were dancing with each other expressing so much love for his music through their unique style of dancing. Not having any type of rhythm I still showed the fellow concertgoers that I was enjoying myself and was glad to be part of the Mexican culture and music.

At the end of his performance, we all wished that he would perform more as he brought the crowd up from their seats. The show continued with more traditional Mexican mariachi bands who played classical Mexican oldies. Davalenco has since released the official music video for “Otro Intento” on VEVO which can be seen at https://youtu.be/CoypDLF-upk as well as his new single “Solo” which can be viewed at https://youtu.be/rDjKMht8fAY

With his solid vocals and good looks, Davalenco is sure to rise to global fame in the Reggaeton urban music scene. I will be following his career closely and will try to attend all of his local concerts, cheering him on from the audience!