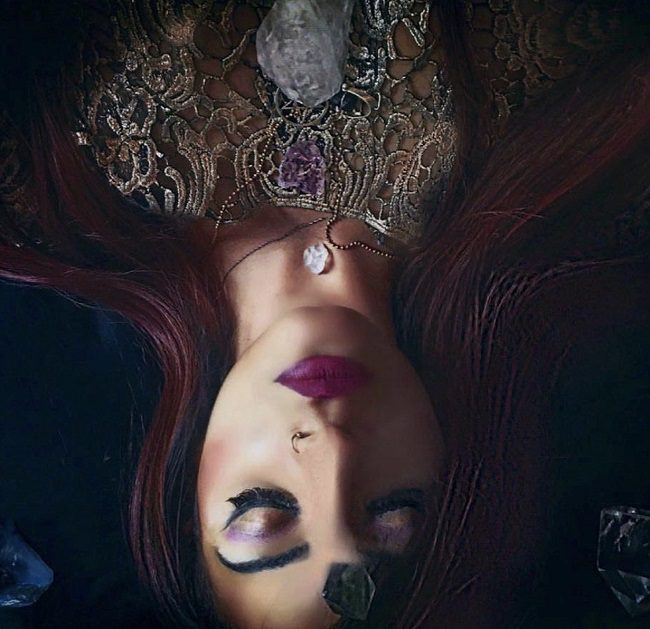 How did you come by your stage name/brand?

My legal name Alexa is a great name, so great that amazon decided they wanted it. So when it came to defining myself as an artist I needed to change it. It was my good friend and manager and producer ( Sidney “Omen” Brown) that suggested I reverse my name.

Leaving me with the name Axela. (Pronounced ex-L-uh) I added the G at the end of it because it’s the first letter of my last name. Reversing my name to Axela G became an alternative version on myself that allowed me to be creatively free to make the waves that I wanted to make.

My brand, however, is the Temple of Axela. Your body is your temple and as far as I see it music comes throughout my entirety to create Axela. I hope that makes some sort of sense.

Well to be honest with you, music was not my first passion. It’s shocking to most that I’ve only been creating music for the last 5 years although music has always been apart of my life. My first passion was competitive figure skating in which I did fairly well.

Music however saved my life. I had a near-death experience involving electricity that was enough to stop and restart my heart which resulted in me having seizures. I can recall the moment that music became the most important thing to me like it was yesterday. I was listening to Starry Starry Night by Josh Groban while having an emotional argument that triggered most of my seizures.

As my body started to electrify and convulse I shift my attention to the music that was playing. The melodic rhythm that I could attach myself to completely took hold of my body and attached itself so to speak. I was able to allow the rhythm to guide my body back to stillness with every note. Music because I’m away saved my life and for that, I honor it every day. It’s been 5 years since I’ve had a seizure and music is the reason why.

As far as my sound influence on my style growing up in the world of competitive figure skating I was introduced to classical music at the age of 7. Later in life branched out to the classics like Celine Dion, Boyz II Men, Aaliyah, Madonna, Heart, Queen, ABBA, Beethoven, Santana, JLo, TLC, Bjork, but more importantly Josh Groban.

I had a bit of a crush on him growing up if I’m being honest. My sound is a blend of classical, soul, RnB, hip hop, pop, funk with an underlying playful play on words. Visually my style is a combination of Madonna’s underwear is the outerwear phase, (the whole leather and lace era) along with some dark edgy, witchy, playful alien, naughty, yet very sexy provocateur vibes.

I have a music video I shot for my song “Lyin & Schemin” with a company called ARealGrip, with Atuanya Priester as the director. It’s all about the traps that we create for ourselves by lying and scheming to get what we desire.

How there many different paths or doors for this case that you can choose to take to get what you want. If you lie and scheme to achieve them then you have to sit on that throne of lies that you built and really think about if it’s really the best way to get what you truly desire. The official video will be released in mid-May.

Oh boy, trusting myself at the end of the day. I can get so lost in a project and feel 90% done with it and then just scrap it and move on to another song. I have over a hundred songs that’s I’ve written and recorded but never released because I didn’t feel they were good enough.

I think every artist goes through the mental challenges that they create for themselves as I do. Wondering if anyone will like it if they will hate it if it’s just bad music. If I let the chatter go on for too long I would never release anything. So I’ve learned to trust that no one is perfect and we can’t all be on Madonna’s level but that you have to start somewhere in order to get anywhere. Most importantly you just have to start.

What I’m best at is being able to create something out of nothing. I could see a candy wrapper on the floor and create a whole metaphorical song around how the wrapper came to be there and where it’s going.

That’s a terrible example, haha! I’m personally creative from the time I wake up to the time I go to sleep, even in my dreams I’m creating ideas that will sometimes because of songs or visuals for a later project.

My plans for the future are to keep learning and creating a sound that can bring people together from vastly diverse walks of life. I have a lot of things in the works that I can’t talk about just yet but I’ll say that it’s a time in which we need something different to lift us as a whole out of the dark time that we are living in, and I plan to do exactly that. So you will have to wait to see the exciting things that I have coming.

On social media of course. Instagram, Snapchat, Twitter, even Tiktok which I have to admit I’m new to.

Trust yourself. Know that it’s never gonna happen overnight and that it takes some time and some self-love, a lot of mistakes, a lot of frustrating nights and a little investment. Consistency is key when it comes to seeing any kind of result.

I’m not saying that you have to be pumping pout content like a machine, Adele is a great example Of someone who works hard in increments which I find way more healthy. Allow yourself to grow and always stay true to what you believe in and what you stand for. Nothing worth having is ever easy because if it was, everyone would have it. Be stubborn and don’t give up on what you want to achieve and you will in time get it.

All Time Low- Wake Up Sunshine Review
B-DOPE AKA Bobby Drake talks about his craft, upcoming projects, and more
Advertisement