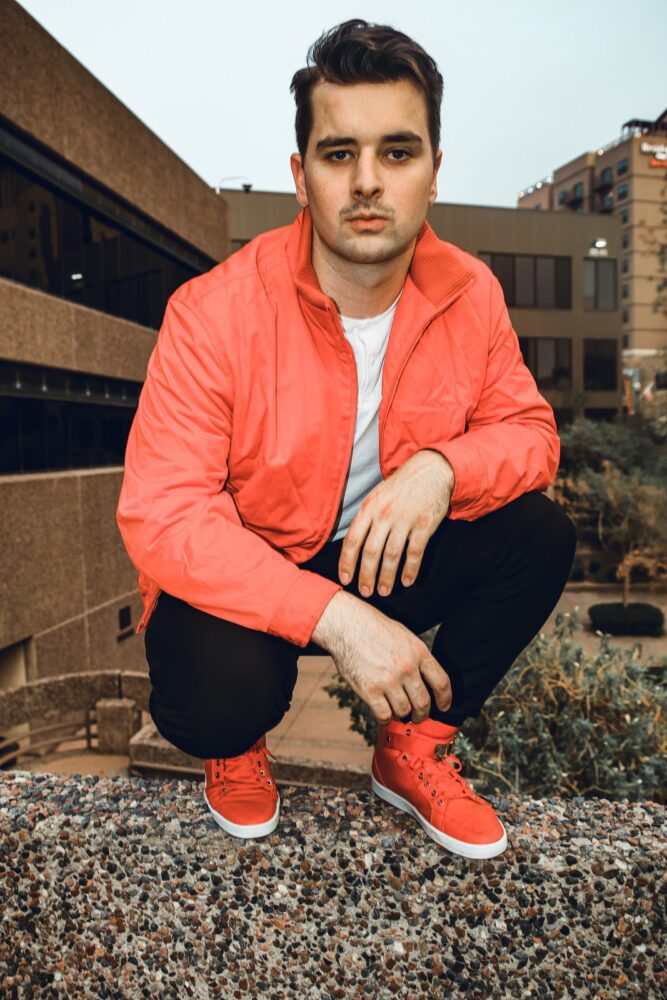 The rise of independent artists throughout the COVID-19 pandemic has been one of the lights to shine on the industry. Undoubtedly, social media has become arguably, the only platform where artists can be discovered right now, particularly with TikTok, Instagram, and YouTube taking the reins.

Deep into the underground EDM scene, I came upon two young artists, Forbes Ploszaj and Michaella Aloba, who in their recent collaboration, have an interesting story to tell.

Ploszaj is a hockey player turned DJ, who spent over 20 years on the ice rink. But when the Arizona artist first started, his passion, more than experience, spoke miles. “Whenever I had free time from hockey, I would work on my music as well,” Ploszaj told us.

Reminiscing back to his college homecoming, the Arizona DJ shared how he first stepped behind a DJ booth. His hockey team decided to throw a party at the team’s official house, better known as “The Fish Bowl.”

“I saw an opportunity to maybe DJ for that party, which would be my first time; I had never DJ’d before. So, I went to Home Depot and bought $300+ worth of wood and started building a DJ booth in the living room of our hockey house. My team had no idea what I was building, but was ultimately impressed when they saw the final product, with the lights and speakers set up.”

It was then that Ploszaj first discovered his love and passion for continuing to perform throughout Duluth. “Live performance as a DJ wasn’t something many people saw at the time,” he said. “I realized how much I loved performing live, so I invested in a DH board and began DJing at clubs and house parties throughout Duluth.”

Forbes’s first professional track, “Joe Exotic (Forbes Remix)”, was released by rap artist Ponce De’leioun and it was also featured on Trap City’s YouTube page and currently has over 500k views. His debut single, “Undercover” was released in late September, currently holding strong at around 400,000 streams.

His latest song, “Tame Me,” is a collaboration with 24-year-old Chicago EDM artist, Michaella Aloba (stage name ‘Michaella’), which has been a project he’s been dying to work on for quite some time.

“It’s a high-energy, big-room EDM track with European inspiration. It’s a song about seduction and being intoxicated with attraction towards another. Michaella did a phenomenal job with the vocals and I could not be happier than to be doing this song with her.”

Michaella, who began in a more “pop” and R&B realm, found herself transitioning into the EDM landscape, listening to bands like Cascada, Secondhand Serenade, and Relient K. From there, she fell in love with what she describes as the “soulful sounds” of Tori Kelly and Sam Smith.

Since she was 10-years-old, Michaella has been writing songs and eventually taught herself to play the guitar. She initially began writing acoustic music, before transitioning to writing over electronically produced beats in 2018.

“As you can see, my music taste is all over the place, but I looked up to each of these artists, and the way their respective careers and voices shook the world,” Michaella explains. “I haven’t had the opportunity to work with any of my childhood idols yet, but I intend to work my way up there. My writing style and vocal technique is heavily inspired by a little bit of every genre that I grew up listening to. I love blending sounds when I can, so it’s been really fun working on EDM tracks, considering my background.”

So, how did Ploszaj and Michaella come together?

The power of networking, which is a skill that is essential in today’s digital age (and throughout this pandemic).

“I was introduced to Forbes Ploszaj through mutual industry connections. I sat in towards the end of one of his sessions the night that I met him, and we ended up sharing some unreleased songs with each other. He played me a track that needed vocals and it was absolutely undeniable.”

For EDM fans near and far, “Tame Me” gives off high-energy from beginning to end. “It’s definitely a track that’ll get people moving,” Michaella describes. “A bunch of late-night sessions and a rewrite is what it took for us to get the track to where it is now. We ended up having two versions because we didn’t like the first version too much. I also got to mess around with the visual, so it was cool being able to explore that aspect of my creativity.”

Working with Ploszaj, Michaella describes, has been amazing. “I appreciate how particular he is; always trying to take sounds to the next level. His passion and dedication to his music is inspiring. It’s been a great working dynamic between the two of us because of how well we feed off of each other’s ideas. I’m excited for our growth and am ready for more insane tracks with him.”