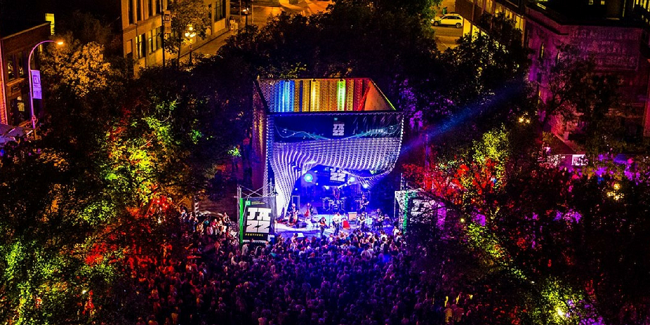 Allow me to break the fourth wall here. My name is Matt Derraugh, and as my bio indicates, I originate from the ever-freezing city of Winnipeg, Manitoba and am a lifelong player and lover of music in addition to writing about it on sites like this one and my own.

One of the current bands I play in, Ash And The Arsonists, is in fact set to release its debut record sometime in the next year, and one can only imagine there will be great things coming in the future with the others as well.

This article isn’t about me, nor any project I’m a part of though. It is for one, a tribute to the city I come from for all of the great music it has produced, and a tour of all the nooks, crannies, and occasional holes in the wall where the cities finest continue to grow and thrive.

I intend it to be an exhilarating primer for anyone unfamiliar with Winnipeg or who would ever think of coming to visit, and whoever I cannot find the space to name here, forgive me- you guys still kick ass regardless.

If the names The Guess Who, Bachman-Turner Overdrive, Harlequin, Crash Test Dummies, Propagandhi, Comeback Kid or The Weakerthans mean anything to you or sit in your record collection, you can thank Winnipeg for producing them. That was where I sat for much of my life, having grown up with “American Woman” and “Taking Care Of Business” being regular fixtures on the car stereo.

When I got to my early 20s, I figured there had to be more out there in the scene today beyond just those famous few. I took to the Internet to research, and from there began to attend shows, socialize and jam out with all kinds of people; veterans, lifers, beginners and everything in between.

If you start anywhere on a musical tour of Winnipeg, it has to be Osborne Village, the indisputable nucleus of the city’s artistic community. One such small, grungy venue that’s stood the test of time since 2005 is The Cavern, the downstairs extension of the Toad In The Hole Pub.

Apart from its weekend shows, The Cavern has routinely drawn in crowds for its Tuesday Soul Nite event, where the likes of Sol James and Dr. Hotbottom have knocked out nonstop sets of soul, funk and R&B, and its Thursday (formerly Monday) Jam Night, where the Joe Curtis Band, Jivetown and Squid Squad have interchanged in recent years as the house band before opening the floor to anyone who wants to pick up an instrument and cut their teeth.

The Cavern will cease to exist in the new year, sadly, much like the late great Zoo and Ozzy’s at the Osborne Village Motor Inn, although Toad In The Hole, or “The Toad” as it’s known to locals will continue in a new space down the street. Several venues have come and gone in the Village’s history, but there are many people around who will make sure the neighborhood’s artists have somewhere to go. Two such people are Rylie Saunders and Kevin Repay, collectively known as The Village Idiots.

The two lifelong music lovers moved into Osborne in 2016 and came up with the idea to have local bands perform in their apartment and stream it live over Facebook. That show, Live At The Roslyn, is now a local sensation and integral promotional vehicle for the city’s artists; including such recurring high energy acts as Moon Tan, Ex Ømerta, Attica Riots, and Ronnie Ladobruk And The Electric (only to name a few of a wide and diverse collective). It airs every Wednesday at 8 PM CST for anyone who wants to check it out.

Crossing over the Assiniboine River, there are many more ongoing venues interspersed throughout the concrete maze of Downtown. The newly-reopened punk haven Royal Albert Arms and the Garrick Hotel are two such places, along with the recently renovated Times Change(d) High And Lonesome Club where Big Dave McLean hosts his long-running blues jam on Sunday nights. A mere few blocks over are the Pyramid Cabaret, where bands of the likes of the electronically-infused Bright Righteous (formerly incarnated as The Revival) have packed the building with their devoted fanbase for years. Vocalist Kevin Hogg and bassist Jay Jensen recently moved to Los Angeles, and have since been working on new material in their refined EDM-meets-rock vein under the name Invisible Friends.

Lest anyone think that Winnipeg’s music world is strictly confined to its core, they should be advised to venture out East, West, North or South on one of the city’s arterial roads branching out from Portage and Main. Nicolino’s Italian restaurant on Pembina serves as a weekly rallying point for the University of Manitoba Jazz Faculty and the larger jazz community, a swinging open jam known as the Cool Wednesday Night Hang.

A similar event, Mardi Jazz, happens on Tuesday nights at the Centre-Culturel Franco-Manitobain (CCFM) in the French district of St. Boniface, while back in and around Old Market Square the Winnipeg Jazz Festival in June is a lively draw of eclectic audiences, local dynamos and guest stars from the United States and elsewhere that have included Chick Corea, Common, Trombone Shorty, and The Roots.

Some of the rootsiest stuff to come out of the city germinates in a wee little place called Transcona. Chief among the many venues the city’s eastward arm has to offer is the Royal George Hotel, a storied dive lined with Guess Who memorabilia and press photos of generations of local musicians throughout the ages.

The hotel owner Greg Pester along with Gary Gach of Jivetown and an assorted collection of music vets host a weekly jam there on Wednesday nights, banging out a set of oldies beforehand to set the tone. In the vicinity are Rookies Sports Bar, Nashville’s, and the Silver Spike Saloon where the Country Round-Up Band has drawn in square dancers for 20 years and counting. Cowboy’s Roadhouse in Windsor Park showcases the live country and brings in crowds in a similar fashion, though its nightlife vibe is far more wild night than wild west, per se.

Worthy of note as well is Winnipeg’s hip hop artists, an aspect of the local scene that dates back at least to Mood Ruff in the 1990s and 2000s and made it’s way up to Young Kidd and Winnipeg’s Most in the early 2010s. Young Kidd is still active, as well as former Most members Charlie Fettah and Jon-C (Third member Jamie “Brooklyn” Prefontaine died in 2015). Several rappers and rap groups like 3PEAT and The Lytics grind out, perform and refine their rhymes around the city’s treasure trove of music venues.

Whether it is in the context of areas such as the “Battlegrounds” competition at the Garrick Hotel for battle rappers or performing live at bars and multi-purpose venues like the Good Will Social Club and the OV Club for regular MCs. Newer alternative-centric venues like The Handsome Daughter in West Broadway have also featured hip-hop-influenced indie-R&B-soul derivative acts from time to time, catering and tending to its eclectic and experimental audience one new act after another.

Lastly, the biggest musical attraction bar none that unites veteran artists, scene goers, and standard-issue Winnipeggers alike is the city’s (and the province of Manitoba’s, for that matter) music festivals. Save Festival Du Voyageur in St. Boniface in February and a couple of others, most of the festivals are a summerly affair; the most famous being the soon-to-be-46-year-old Winnipeg Folk Festival northeast of town. Held in a rolling, open section of Bird’s Hill Provincial Park, the long-running sonic cornucopia has brought in such big names as Sheryl Crow, City, And Colour, Feist, Death Cab For Cutie and The Sheepdogs in just the last few years, along with local favorites like Five Alarm Funk, Micah Erenberg and The Small Glories.

Even further north of town is Dauphin Countryfest, which this year is set to feature John Fogerty, Trace Adkins, Joe Diffie and Dean Brody among its headlining acts. Like the Folk Festival, local acts of the likes of southern rock outfit Wreckin’ So, the Juno-winning roosters The Bros. Landreth and non-country bands such as the esteemed Dirty Catfish Brass Band have graced the Dauphin stages in recent years along with the impressive big-namers the festival attracts.

The Howl At The Moon Festival south of town in Morris, Manitoba is a similar affair, blending country industry hitmakers with Winnipegger-or-around-ers including Petric, Greg Arcade and the Chris Michael Band. The Real Love Festival in the Interlake region nixes the intimidating presence of household names and is strictly a place for independent local artists to thrive, cultivate their craft and share their creations with an engaging and receptive community of Manitoba music lovers around them.

Much more could be said about the city of Winnipeg’s ever-expanding potpourri of artists, venues and musical outlets, from the alt-pop-indie-dance grooves of Royal Canoe, Yes We Mystic and Deep Dark Cave to the eclectic and artist-laden UMFM and CKUW college radio stations and the podcast jewel of Witchpolice Radio. Since I’ve already taken up enough of your time and given you a basic road-map of an amazing and restless scene in a small, snowy city north of the border.

I’ll encourage you to take things into your own hands and, as I did a mere few years ago, do your own research, dive in and have fun. Perhaps it will spark an interest in you to visit our great city and take everything in, or if you’re a Winnipegger yourself reading this, catch up on all the great music you’ve been missing or– just maybe– go pick up an instrument yourself and start rocking today.