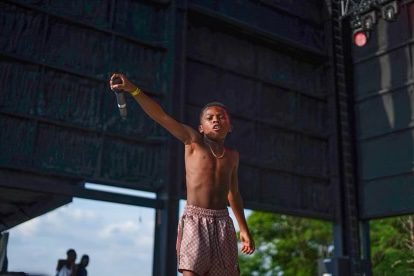 Hustle Mason, aka Tn_boosie, has been making colossal strides in his career as of late. Tn_boosie grew up in Seattle, Washington, and is rapidly becoming one of their biggest stars. Tn_boosie began his rap career at the age of 8 and has been in the spotlight ever since. His new hit single “I’m That Winner” has the whole industry on their toes. His unique lyrical style is something that we have yet to see out of such a young artist. He credits his ability to be so creative from the greats he grew up listening to, mainly 2 Pac, and Pimp C.

Tn_boosie is an independent artist who has a desire to sign a promotional deal with a major label. When his fans listen to his music, Tn_boosie wants to deliver the message that anything is possible. Tn_boosie intends on being an inspiration for any young artist out there that wants to follow their dream. He has already accomplished so much, and this is just the beginning. Tn_boosie has the desire to work with Drake and Roddy Rich in the future.

Tn_boosie is always in the studio with his producer, Jaccem Smaccem. When these two get in the same room together it’s like Jay Z and Kayne West. They are guaranteed to make a hit. Currently, Tn_boosie is working on a tribute to the late great Biggie Smalls by remaking his legendary song “Juicy”. Biggie Smalls is a big inspiration to Tn_boosie and he wants to honor him by adding his own unique twist to the song. With so much in the works for Tn_boosie, this is an exciting time for him and all his fans. Be sure to follow Tn_boosie on all platforms to keep updated on his life and the release of his upcoming work.