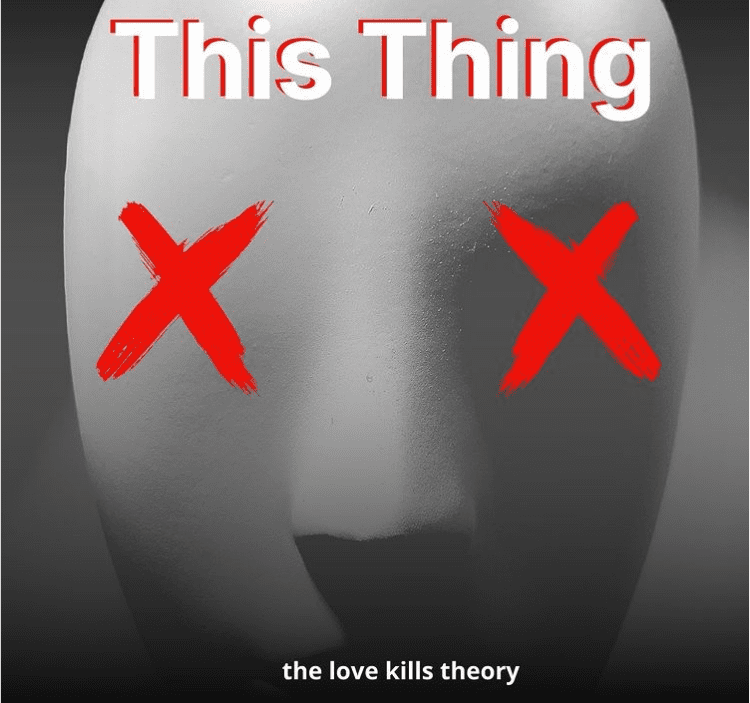 The band explains, “‘This Thing’ is the insatiable void. The feeling of emptiness is not satiated by obtaining the things we desire. This is the essential paradox of the love kills theory.”

Set apart by their aural soundscapes, melodic hooks, and distinctive rhythms, The Love Kills Theory is also exceptional because of their lyricism, which springs from the works of Guy Debord, Aldous Huxley, and current bio-genetic research on the evolution of despair.

The love kills theory proposes that the regression occurring in all mediums requires a complicit and intellectually lazy audience, who in turn demand less and less in terms of content, yet impatiently seek instant gratification. Combined with the vanity of performers, whose focal point is attention, which precludes any attempt at meaningful content, the inevitable result is a cultural wasteland.

Thus, The Love Kills Theory is just as much a philosophy as a band, an effort at tipping the scales in opposition to the prevalent self-indulgence and flagrant material consumption afflicting humanity.

“This Thing” opens on dirty growling guitars, followed by a fat, rolling bassline and tight, crunching percussion. Strident, glaring accents give the tune tense sonic edginess as sotto voice vocals ride over radiant harmonies. The mood and feel of the harmonics are deep and dark, at once portentous and latently malevolent.

Visceral with hints of retro flavors, “This Thing” blends filaments of punk with tangs of new wave and grungy alt-rock. The Love Kills Theory has it going on!