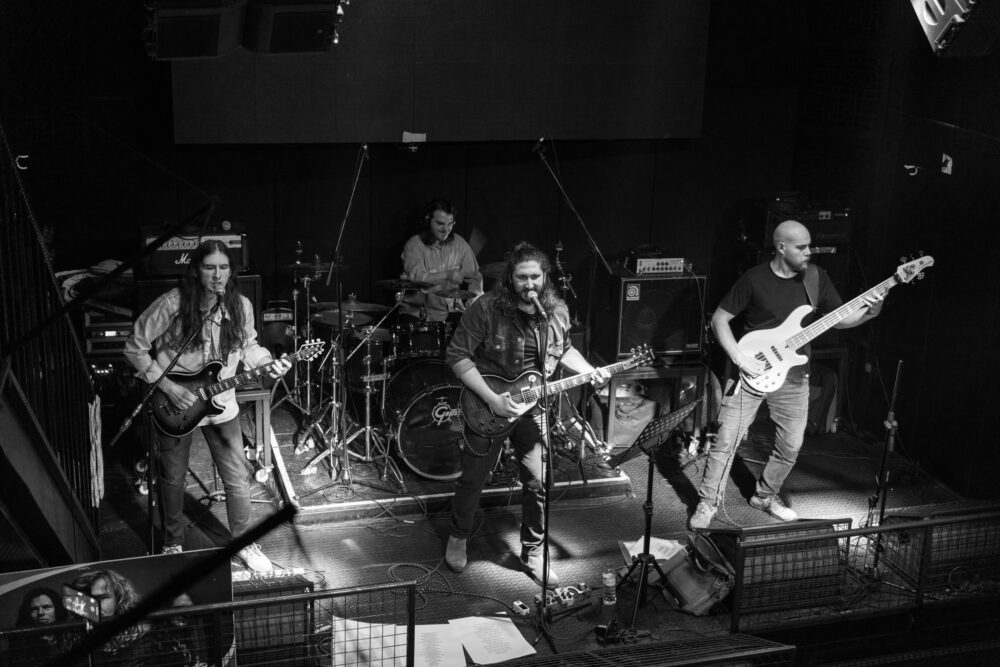 How did you come by your stage/band/name?

Gündoğdu Akın (Founder, Lead Singer) – Riddles in the Dark started as a solo project for me but I wanted it to be a full band eventually, therefore I was trying up some names.

My girlfriend, my brother, and I are huge Lord of the Rings fans. We watch the trilogy 2-3 times a year (extended) and the day I decided the name of the band was one of those days. At that point, I had been thinking about a band name for almost 4-5 months and I was getting nowhere. I knew what I wanted the name of the project to feel like. It should have been political, questioning, and wondrous yet not in an obvious way.

One night we decided to watch LotR together. There is this famous scene where Gandalf quietly smokes his pipe while whispering ‘Riddles in the Dark.’ My girlfriend suddenly jumped up and down saying this should be the name! It was the perfect name, I fell in love in that instant. We continued jumping up and down together and that day Riddles in the Dark was born.

Growing up listening to Pink Floyd, Radiohead, Alan Parsons, Muse, and many others we really draw influence from them. Gündoğdu was trained in Opera – Singing at Istanbul University State Conservatory for a couple of years. He did drop out of school in the end but his style and vocal technique is inevitably imprinted in our sound.

Atakan Ertekin’s unique bass melodies also play an important role in Riddles’ sound. Kaan Yurdakul (guitars and back vocals) and Berk Tekelioğlu (drums) are very characteristic players, they can take any song and make it entirely their own which contributes to the Riddles sound tremendous. Also, Gündoğdu has a choir background in Boğaziçi University’s rock choir so we try to incorporate choral music into our sound as well.

We like big strings, we like synth sounds. Lyrically we try to convey our opinions and questions about serious issues so we try to make our sound as big and as dramatic as possible.

We as a band are not satisfied with what most of the mainstream music industry has to offer in terms of content. Living in Turkey (except Kaan who lives in London) we’re not short of social issues to write about but we try to keep the issues as universal as possible. So you can say that our environment already provided some of the concepts for us.

Our main thought was: ”There are times when you can’t just keep reading about this stuff and you need to start speaking up about it.”

We wanted our sound to be big, dramatic, and serious. We didn’t want to sound like just another rock band. We definitely wanted to be political and take some serious issues to heart. We wanted to take our listeners on a musical journey.

We also try to keep our lyrics open to interpretation so our listeners can actively think, argue and wonder about the meaning/messages behind them. That’s why think the name Riddles in the Dark is very fitting for us.

At this moment we’re planning a couple of concerts around Turkey, mainly in Istanbul, and a couple of festivals. In the future, we are planning on playing a couple of gigs in London and USA. We’ll be releasing the next videos of our Acoustic Live at RIST Istanbul sessions in the next few weeks. There are also a couple of new singles coming out starting in June, so stay tuned for some new music!

As independent musicians, the things we have to manage (Instagram, Marketing, Campaigning, Content Creation, Recording, Mixing, etc.) are piling up day by day. It is very hard to be heard by new people especially when social media companies change their algorithms a couple of weeks.

Not to mention earning a decent living from streams. So support your fellow artist! We should support each other. And it’s free! Hit that like button, share each other’s songs with your friends, and be nice to each other. Remember, no one can understand you better than a fellow artist who goes through these same things!

FendiAlone Is Setting the Trend for the New Era of Artists
Gearing Up For Finals Week? JPecs Has You Covered With a New Copyright-Free Lo-Fi Album
Advertisement