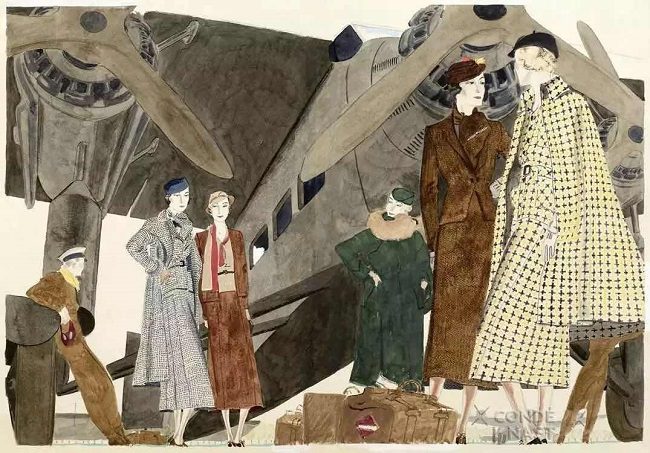 In the 1930s between the Great Depression in the late 1920s and the Second World War, it seems that it has been habitually ignored. After all, in this “worn 30s”, the whole world is promoting food and clothing, and everyday clothes will no longer be The words luxury, individuality and modernity appear to be a bit dull. What a wonderful retro time.

However, to describe in one sentence ~ the 30s is actually an era of extremely daily but extremely attitude! It suits every girl, but simplicity is never a compromise ~

Women will never give up beauty because of “poverty”. In such a period of economic depression, the 1930s still has its own unique fashion attitude. The most representative is the tweed suit. This simple and convenient clothing is also the most representative. One of the clothes of that era.

The tweed suit seems to represent the spirit of the era, not to pursue eye-catching, but it is very attitude, a kind of not humble attitude in the face of “poverty”. It also just meets most of the girls, and can be controlled by different temperaments and different bodies, which is very effective!

Of course, tweed is relatively formal. The relatively casual suit combination in the 1930s was a sweater + half skirt, and a shirt + half skirt. This also can be seen in Japanese clothing.

Compared with the Party Girl in the 1920s, the girls in the 1930s did “a lot”, but there was a sense of sunshine. The skirts of this period are generally A-shaped with a length below the knee, and the waistline is emphasized by a tailored cut ~ Of course, tweed is relatively formal. The relatively casual suit combination in the 1930s was a sweater + half skirt, and a shirt + half skirt.

The theme of women ’s constant beauty also dresses. The dresses of the 1930s also replaced the sexy low-waisted straight skirts of the 1920s with elegant high-waist skirts. They are similar to the vintage wrap skirts that were popular in the fashion circle last year. Very friendly ~

Neckline design is a major feature of that era ~ there are so many varieties. This kind of painstaking attention to small details can be seen in a cost-saving environment, a kind of timelessness about beauty ~

In the 1960s, the Hollywood classic film “Male and Female Thieves” with the background of the Great Depression perfectly reproduced the classic style of the 30s. Bonnie wore a woolen beret. This movie was also successful in the 1960s, there was also a retro wave of the 1930s ~, 1960s is different compared to the 1980s grunge fashion.

In 1936, the Danbis / Tampax tampon became popular in the national fitness demand after the Great Depression, which greatly promoted the development and popularity of the one-piece swimsuit. , Straw hat/sunglasses/one-piece swimsuit is a good choice.

The clothing silhouette of the 1930s still looks smooth and dynamic, but unlike the 1920s, the clothing of the 1930s has more feminine beauty, the waistline has returned to normal or even higher positions, and the silhouette has become thinner Long, hairstyles also have Bob turned into sexy curly hair; at the same time under the macroeconomic depression, at the same time, tooling suits and other casual suits such as pajamas and other single products also came into being.

In terms of specific clothing styles, flared sleeves/ruffles / Peter Pan collar square collar boat collars and other decorations are popular, and pajama suits were also popular at the time. It should be noted that wearing a thick and stable heel is safer Because it is enough to reconcile the excess style of pajamas.