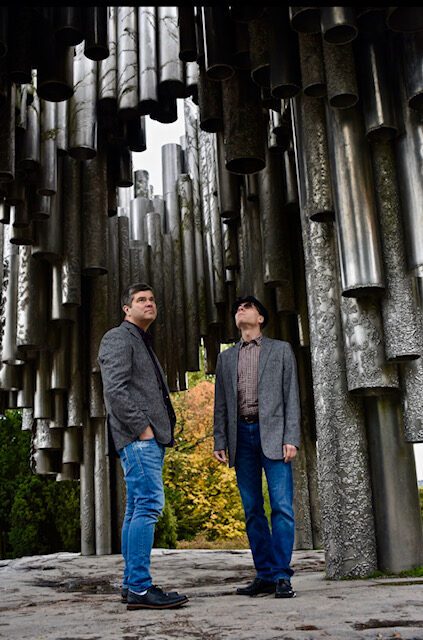 New Music From Alt Rock Pop Band The Impersonators…. The 90’s Alternative Inspired duo Comprising of  Tom Tikka and lyricist Antti Autio, masquerades as a full band and does everything it can to defy convention – whether that being their insistence on avoiding touring or their songs, which home in on the warts-and-all gnarliness of love and real life.

In fact, if one were to find a common theme that runs through the group’s entire catalog it would probably be how life very seldom resembles or turns out like Disney fantasies.

Despite their poignant lyrics, The Impersonators are still a joyous and sweet proposition, with their vocal harmonies and chiming chords harking back to such 60s pop majesties as The Beatles, The Byrds, and The Beach Boys. Together with their secret weapon, producer Janne Saksa, The Impersonators craft their lyrics and melodies into retro-flavored “alternative pop/rock”. While adding a modern twist to the final soundscape, their most important goal is to nurture and cultivate the creativity, spirit, and warmth that graced the pop records of yesteryears.

From the band…  This tune started taking shape after a therapy session, during which I was made to reflect on what my role has been in pretty much each and every one of my relationships. Although it was hard to admit at first, I soon came to realize that I’ve always been the so-called “designated driver,” the one who abstains from getting what he wants so those around him can be content.

I must say I hated that session. Mostly because the time had come for me to accept that the strategy I had used for decades was finally failing me. I was quickly becoming bitter and disillusioned about people but also sadly, weary of love – perhaps one of the greatest tragedies that can befall anyone.

Unaware of my soul search, Antti sent me a beautiful poem about a couple growing old together. I remember reading it and laughing out loud, thinking I wouldn’t be able to write anything in that vein…and yet, the lyrics for the chorus were missing! A few days went by before I returned to the poem but as soon as I did, it hit me. Whether right or wrong, why not just write about what comes most naturally to me: trying to assure the happiness of the people I love. Before I knew it I had the words of the chorus figured out.

The melody came easily, in just one sitting. I knew the chorus had to be uplifting, so I knew where to go musically. I did turn to my wife Elina for help once again and she came through just as she always does with that haunting guitar riff that opens the song. After this, it was down to our producer Janne Saksa to bring the track home, and boy did he ever. When I first heard the final version, it knocked me out completely.

To end on a philosophical note, the advice I just gave my eldest son about love is one of my favorite Oscar Wilde quotes: “Never love anyone who treats you like you’re ordinary.” I can only hope that he was listening and more to the point, that he will be patient enough to follow this piece of advice.

This was the hardest music video to make so far. So many good ideas had already been used and I really enjoyed the one we made for “Circus,” which meant the bar was set high. As a result, it took a long while before an idea (which everybody involved fancied) came about.

However, it finally did. As the song was inspired by a therapy session, I figured that this is what the music video should be about as well: psychotherapy. Only instead of the focus being on the patient, we decided to make the video about the psychiatrist, someone who is strained by dealing with his patients’ issues, locked inside his mind, struggling with his many troubled and twisted egos, attempting to pull himself together while between sessions.

Once again, the core of the script was mainly the brainchild of my wife Elina, but this time we turned to Tuomas Palola for help to complete our ideas and also to film and edit the final product. I knew Tuomas from the times of Carmen Gray (he made music videos for “Gates Of Loneliness” and “Fall In Love”) and was very happy that he wanted to jump on board this project. Shooting the music video was a lot of fun. I enjoyed hanging out with Tuomas and obviously, the Falkman Atelier, in which the therapy-session clips were filmed is a spectacular room.

My favorite memory of making the video is when we were shooting the clips where I play and sing. Tuomas wanted me to try to sing and play this incredibly sped-up version of the song (it had something to do with slowing the clip down for the final edit) but the bloody thing was so fast that there was no way I could lip-sync with it. What happened was that every time I tried to sing lines such as “daytime turns to grayest evening shade” I broke out in laughter. It wasn’t happening. LOL.

India based Urdu Rapper, Atishbaz (Mo Boucher) from THugs Unit talks about his craft and more
The 80’s POP Ballad is back with Sharon West
Advertisement