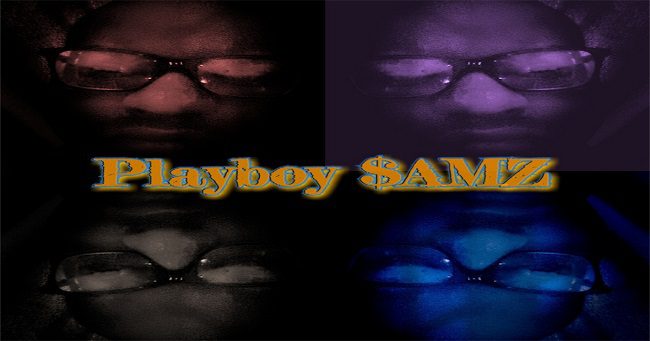 How I came up with my stage name, Playboy Samz, is an easy but hard thought one. I wanted my family to be comfortable with calling me by my stage name by using a name that they had called me all through childhood and that’s “Sam”, So I could not leave that out at all because I actually got so comfortable with the name that when I was in preschool I did not even know what my real name was.

They said they called me Sam because they watched a lot of the show called, GunSmoke, with James Arness the actor and Sam was the bartender. I took the name and ran with it. I myself am the one that incorporated the Playboy part. Ever since my childhood has been chasing me around and following me and playing every little game that I play with them.

I always focused on one girl until I felt like she didn’t deserve my focus anymore because I wasn’t getting anywhere with her and you know how that goes. the moment you show affection towards another woman that has been begging for your attention here comes the one that did not want your affection now wanting what she can’t have I have been in a lot of relationships talked to a lot more than I probably should have in my life and just like the typical “playboy” you can’t remember them all.

I always had a small circle of potential players but I also knew when it was time to put buddies on house call status because I was not about to be without a cuddle bug.

I discovered my passion growing up in project housing in Oklahoma where the Liquor just keeps on pouring. My moms and dad and all their friends would sit outside with a boombox and listen to the blues and drink pretty much all day.

They did their thing and I would do mines by sneaking over to the neighbors that always had a boombox at the community park or the big Homie that just put 2 15” subwoofers in his trunk and just bought that new Scarface tape and has it on full blast.

That was just the start of my passion for music I later moved to a bigger Oklahoma school where I had to go to a music class that was mandatory after I thought I left the party on the project steps I was introduced to an education in music and arts all through my childhood.

I was meeting all types of musicians, Drummers from California guitar players from out of state and honestly people that a kid from the projects should not be meeting. I spent my whole childhood writing music by the book loads and freestyling I got so drawn into music that I felt like I only needed to know the basics of everything in life.

I realized I wanted to be a hip hop artist in the 7th grade because quite honestly that is where the road I was taking was leading me too. I knew it would be a long journey and I probably would never get signed by a major label because I am just another story about ”rags to riches” in my mind. Started by my equipment piece by piece just like every other artist that was hopeless and determined.

Honestly, I have to give myself the credit as self-centered as it may sound. The truth is that we are influenced by our surroundings and the things that we see on television. Not every episode on the television is positive or actual fact and it is up to your parents to tell you straight up.

It’s fake, its fiction meaning people just made it up to scare you. Not everyone that you run into in life is a good person. That is why I have always had an open ear I listen to almost every story someone has to tell. The thing about life is this, To me, you go Through life and take advice but in the end, it is you who has to make the ultimate decision.

Life is a journey and sometimes you have to walk alone and figure out who you are before you can find the people that really need to be in your life. I have met a lot of people and shook a lot of hands but if I had to give anyone the credit it would have to be life itself.

I have written plenty of music in the past and released a number of songs. The way sees a song is that if people really wanna hear it they will download it on Spotify or whatever musical platform that a person prides themselves on and the truth is you will never know how good your song is doing until you get those broadcasting reports.

Just like my song “Night won’t last”, A song that I was more than excited to make, I had low expectations for the song but I guess I underestimated myself, I find myself doing that a lot but like James Brown if it sounds good and it feels good then it must be good, at least that is what he said in the movie.

The greatest challenge that I have with any of my work is getting started. I know that there is product demand for my music but the hardest part is picking up that pen and giving the Fans what they wanna hear. I have to tune out the world and get the vibe and cross my T’s and dot my I’s change phrases and rearrange phrases take out the conjunctions to give it a more realistic feeling.

Sharpen notes and makes even tones do my best to make sure I do not present a lazy production. Make sure the production is not too overwhelming to the people that listen to it There is a lot of work that goes into the music.

The photo shoot going out there and taking the best pictures that you can and putting your personal touch on them or trying to explain your vision to your photographer for the alum cover and just making sure all things are done under your name meet your standards and that of the company that you are building.

I admit I can get a little self-centered at times but as an artist it has to be a trait yes I do know there are artist that have songs that are possibly better then mines there are chart-toppers and all that other good stuff but honestly I think I am just fine where I am at, It takes a lot to Reach superstardom and a person needs a little wiggle room every now and then what I like to call a cool down period.

Now I do admit that some people take way too many cool-down periods in their music business and miss out on a lot of diamonds and gold but I believe anyone can make it to the top with the all the right keys because without the right keys doors will not open. They do have smart locks these days but what happens if you lose your phone, the same as losing your keys.

I plan to keep making good party music and the type of music that keeps bringing in those downloads. I don’t want to be can’t even walk down the street famous I just want to share my music with people and once again as I said before getting those downloads.

Thank the fans and supporters and have people thank me and ask me when am I gonna release a new song just like the one they liked and downloaded. I don’t want a heavy workload but I can do the best I can to deliver.

I would like to thank my family for being such party addicts and all of the people that I met along the way on my journey to get to where I am at now.

My advice to you is this keep at it, not every song that you make is going to be a Platinum track even though it has platinum potential.keep in mind that you still have dig through mud to find gold, let as many people know about your song as possible it’s hard starting out to let people know who you are. find you some solid promoters.

Keep your fan pages up to date with material that is the most important thing of all answer some fan mail. Never think that your job is done when the recording is finished. take pictures to do whatever you can to keep your fan pages up against one post a day keeps the Profile awake.