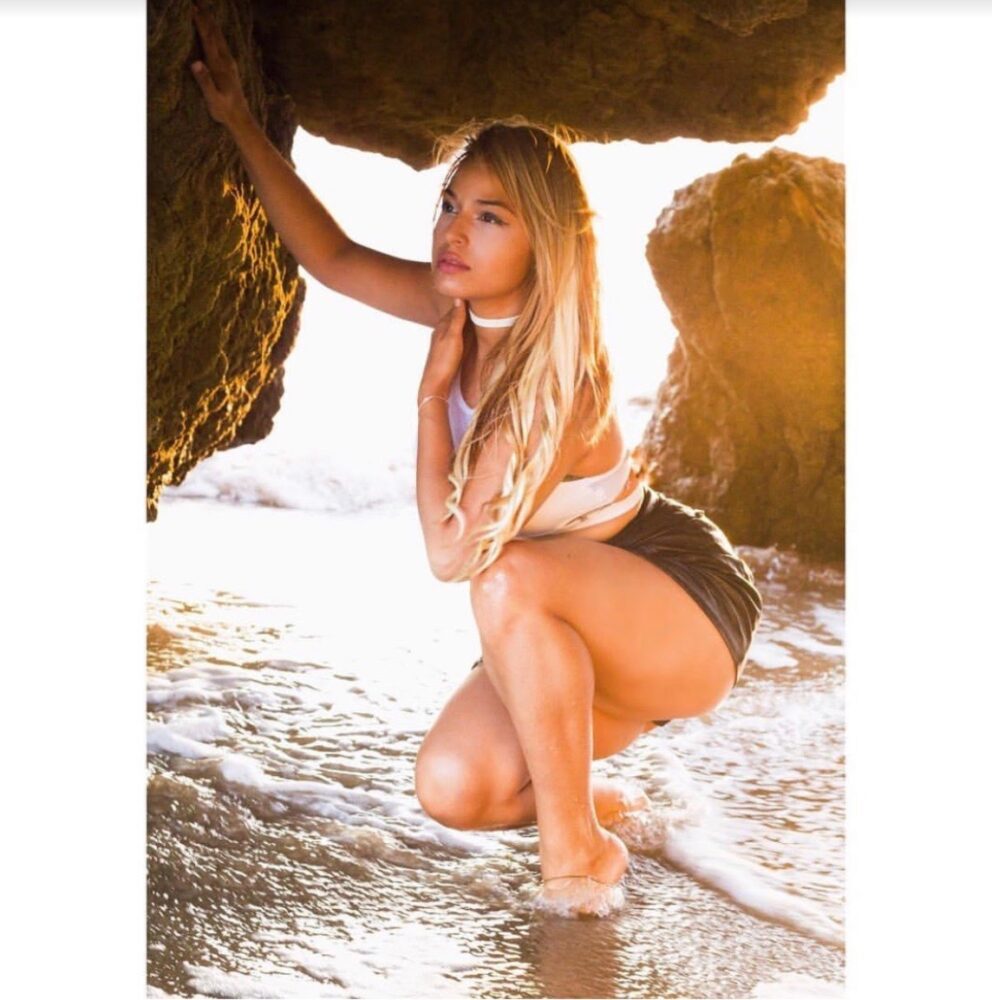 A song about empowerment and fearlessly walking away from toxic relationships, “Run Away” also mirrors Amanda’s taking hold of her own power, discovering self-worth, and moving forward with poise and compelling independence.

By the age of three, Amanda Holley was playing violin and writing her own songs, followed by performing on Off and Off-Off-Broadway. Since then, her ascension to the top seems pre-destined, including advocacy from Grammy winner Brian Stanley, The Gorillaz, Jimmy George, and Cuba Gooding, who identified her as “a beautiful young artist with a fantastic voice.”

Her 2020 debut single, “Feenin,” resulted in touring the U.S., playing Carnegie Hall, a Coachella afterparty, and the United Nations. And right now, Amanda stars in the reality show, Acting With Hollywood Stars, produced by Larry Namer (founder of E! Entertainment) and Randall Emmettt.

The video, directed by Louie Gooey, Eva Rafael, and Amanda Holley, depicts relationships crumbling under the weight of disrespect and emotional abuse, leaving individuals feeling trapped and dreaming of escaping. Visual shifts to Amanda on the beach and in the studio, highlight the inner peace and freedom obtained by simply breaking free.

“Run Away” travels on luscious undulating waves of swanky R&B as Amanda parades her velvety, evocative voice, imbuing the lyrics with tangible resolve.

Impressed and intrigued, Muzique Magazine spoke with Amanda Holley to find out more about the person behind the music, her newfound empowerment, and her songwriting process.

When I recorded and co-wrote “Runaway”, I had just taken a massive leap of faith and finally asserted myself as an artist, female, and person! I had just stepped into my own power but hadn’t quite realized I had changed until I finished recording my album! The video was something I collaborated on with Louie Gooey and much of what I envisioned was from my subconscious. I didn’t know that until after we shot it. We started with a “test shoot” by the ocean – I suddenly found myself climbing to the top of the cliffs! Once we finished and realized we would be using those shots in the official “Runaway” video, I decided I wanted to include the moment on the studio floor at Claudio Cueni’s (engineer for Boys 2 Men, etc.) studio. That moment was deeply personal to me for so many reasons. The circumstances, though painful, that compelled me to fly across the country brought me to that studio floor where I found something in myself that exceeded my own expectations.

What do you hope your fans/listeners take away from the video?

I also realize I’m not the only one who has survived trauma and tragic circumstances in the world – hence, why I had to bring in other characters from different walks of life into the video. I want my audience to know that no matter where you come from or what happens in life and in love/relationships, you can own your inner light and be strong enough to walk from negativity. I hope my fans and listeners can take my journey as inspiration to know their inner worth – because no matter where someone comes from or what one has been through, each and every human being on this planet is worthy and deserving of true love and fulfillment and each of us is strong enough if we decide to recognize who we truly are.

My family says I sang before I spoke. . . I started playing the violin at 2 and a half years old because I wanted to be able to join my mom (she went to Manhattan School of Music) when she would play her cello in orchestra pits for various musicals. I wrote my first song when I was 3 . . . I told my mom I heard “angel voices” in my head. That was the only way I knew to describe what was happening when I heard original melodies. She explained to me that I was composing music like my father. He wrote for Sarah Vaughn and though he wasn’t in my life, I had somehow gotten his gift for songwriting. I eventually met his sister who I found out went to Juilliard. My aunt, Pat Holley, discovered, wrote for, and co-managed Stephane Mills. She helped me cultivate my singing and performing.

As a little girl, I just assumed that being a singer was my job in life. I started performing for local events and people just kept asking me to sing until I finally ended up Off & Off-Off B’Way. However, I knew I was born to be an original artist. For me, the stage was the only place I could be myself and be free. I had a really challenging childhood. Music was all I had and was the safest place in the world for me – the song was the only thing that seemed real in life – something worth living for. I also loved the fact that I, a “helpless” 5-year-old, could help the “grown-ups” in the audience cry if they needed to cry, smile if they needed to smile, help them feel loved, help them feel powerful. When I would sing to the audience, I could truly express my own sadness, find joy, release my pain, fuel my passion, and find my own power. When I’m with a live audience, it fuels me.

As a child, I knew I would be a singer, but never imagined a poor little girl from Newark, NJ would end up opening 4 seasons of Style Fashion Week, singing my own song at Carnegie Hall, playing at the United Nations, or working with multi-Grammy and Oscar-winning producers.

Not to say I didn’t love, love, new music growing up because I did, but I turned to the classics the most. I was the strange child who listened to Aretha Franklin, Whitney Houston, Stevie Wonder, Billie Holiday, James Brown, Ella Fitzgerald, and Brian McKnight among others on repeat. I relied on great melodies and lyrics and soulful pure voices to get through my days and nights. Their music and lives inspired me and still do every single day. I realized at 3-years-old that I wanted to carry the torch and do for others what these amazing artists have done for me on a soul level.

For me, the songs write themselves. I hear music day and night, when I wake up, when I go to bed, when I’m dreaming. I just try to keep up with all the ideas by using voice memos (I have thousands) . . . Sometimes, I take the piano and lay a sketch and send my idea to different producers in my camp, and other times I’m given an amazing production to write a top line for. My latest single, “Runaway,” was one that I collaborated on. I met my producers / co-writers (Cecily Wagner, Davis Chris, Shane Foster) for the first time that day and we wrote, and I recorded the entire song from scratch inside of two hours. Davis Chris produced the entire track simultaneously. Davis and Shane just charted Billboard 5xs this past year. When I met them, they were just getting started! We have about a dozen songs together.

I love challenging myself and being challenged by great producers and I’m always growing. I think the way to be “fresh” is to not dictate where the song goes. I let the music and the moment happen to me and I become the vessel for the song.

You have a new, upcoming EP. What can you share about the EP?

This EP (I still haven’t announced the title, lol), is my unfiltered story. The music on it carries my blood, sweat, and tears. The music is so personal to me and as each song was created with my producers and co-writers, and with every line I wrote and sang, I grew artistically, emotionally, and spiritually. The EP starts in the street because that’s where I started. I’m so excited to take you guys on this journey with me.

I think The Weeknd is making some really beautiful and meaningful music as well as Giveon.

You’re currently starring in a reality show. What’s that like? Easier or harder than music?

I am so excited to be starring on “Acting With Hollywood Stars” with my beautiful director, Bobbie Chance (E! Hollywood’s Acting Coach To The Stars) under our executive producers Larry Namer (founder of E! Entertainment) and Randall Emmett (The Irishman, Power, Vanderpump Rules).

Like I mentioned earlier, I played in the theater as a child and teen in NYC and in state theaters. Acting always has been a part of who I am as an artist . . . I was trained and mentored by Tony and Emmy-winning Actors throughout my childhood and this show, because of my director, is so raw that I had to say yes to being a part of it.

I wouldn’t say acting is easier or harder than music . . . I feel like the two are interchangeable and each one helps the other.

On set and working with my director, I get worked beyond what I feel like I can handle, sometimes my shirt is drenched in tears and my heart feels like it’s past the brink. As an artist, the harder it gets, the more I get pushed, the more on fire I am like I’m always starving for more. The result is something true and powerful.

Hmmm . . . I love so many records that are out right now . . . Songs I wouldn’t necessarily write myself, but luv to sing along with in the car . . . I don’t feel guilty tho.

Music is who I am . . . Music has carried me my entire life and I can’t wait to have a platform to use my music to change the world in whatever positive and impactful way I can.