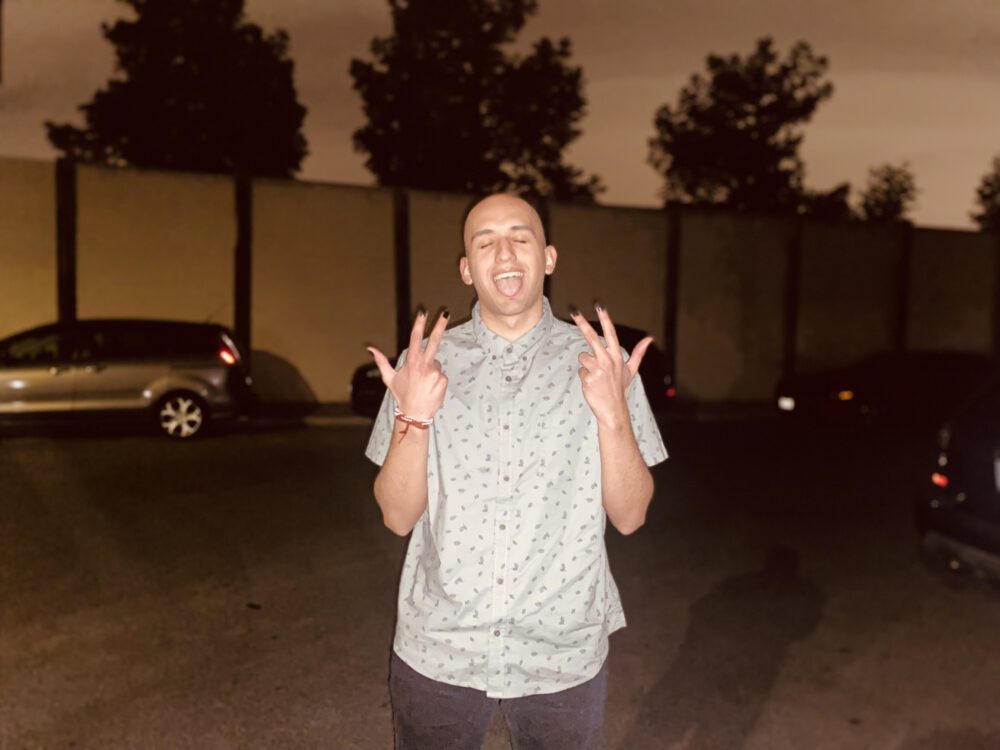 One day I was at a family party when my stepdad looked me in the eyes and said, “you know what you should call yourself? Johnny Ba$h”. He knew I had always been a big fan of Johnny Cash. The “Mr.” came about from freestyling. I don’t know why, but I would always call myself, “Mr. Johnny Ba$h”, especially when I was practicing braggadocio rap (my favorite style of rap).

When I was a kid, my dad would play West Coast Hip-Hop music while we would clean the garage. He would blast artists such as 2Pac, Dr. Dre, Snoop Dogg, Eminem, Outkast, and Chamillionaire to name a few. It was also at that time when he showed me how to spin turntables. This is when I learned about classic Hip-Hop artists such as Grandmaster Flash & The Furious Five, The Sugarhill Gang, the Beastie Boys, Kurtis Blow, and many more.

This is where my love of music truly started. In middle school, I got really into Indie Rock bands like fun. and Foster The People. In high school, I found a passion for singing through theatre. When I was 18, I taught myself how to play piano and the rest was history. It was around the age of 20 when I found a new brand new love; Punk Rock. The song that changed my life was Lost in the Supermarket by The Clash. That was the song that showed me the complexity and emotion Punk Rock music was capable of capturing.

My sense of style comes from many different things. I am basically trying to throw 1970’s Punk Rock, Early 2000’s Indie Rock, and Late 80’s – Early 90’s West Coast Hip-Hop into a melting pot to create something insane. I always give credit to the artists that inspire me. I want to make music that will challenge people intellectually, and really make them reflect on their own lives. That’s what my favorite artist do for me

My current project is an EP titled, “Mr. Johnny Ba$h Is A Dope MC”, which is a concept EP about cutting toxic people out of your life and learning how to love yourself. For the sound, I wanted this EP to have a distorted sound, much similar to Never Mind The Bollocks, Here’s The Sex Pistols by the Sex Pistols. This album has a lot of influence from classic Punk Rock and Indie Rock from the early 2000’s, mixed in with some modern-day emo-rap.

I wanted to create something that I would blast at max volume in my Prius. My goal with this EP is for people to be so busy banging their heads that they miss the positive lyrics underneath the distorted music. Mr. Johnny Ba$h Is A Dope MC will be out on June 3rd, 2022.

My greatest challenge as an artist is being a perfectionist. When it comes to my art, I’m never satisfied. I can’t let myself sit for a minute and be content with what I have accomplished. This type of mindset definitely has its perks, but I find it frustrating that I can’t find it in me to just be proud of myself. This is something I’ve been working on for a while now. I would like to learn to allow myself to be happy with the art that I create.

Yes. Nobody is doing what I’m doing.

For the near future, I would really like to continue to get my streams up on Spotify and even get placed on one of their editorial playlists I plan on looking for work as a live musician to put on concerts for a crowd. My heart lies in performing. It’s in my theatre roots. I would like to put on a show, unlike anything anyone has ever seen. My main goal with music is to start touring by 2023.

I will give you the advice my aunt gave me, “If you don’t have haters, you’re doing something wrong”.

“Stellar” the new single from Alex Temiz is out now!
Bochinx Interview with Muzique Magazine
Advertisement