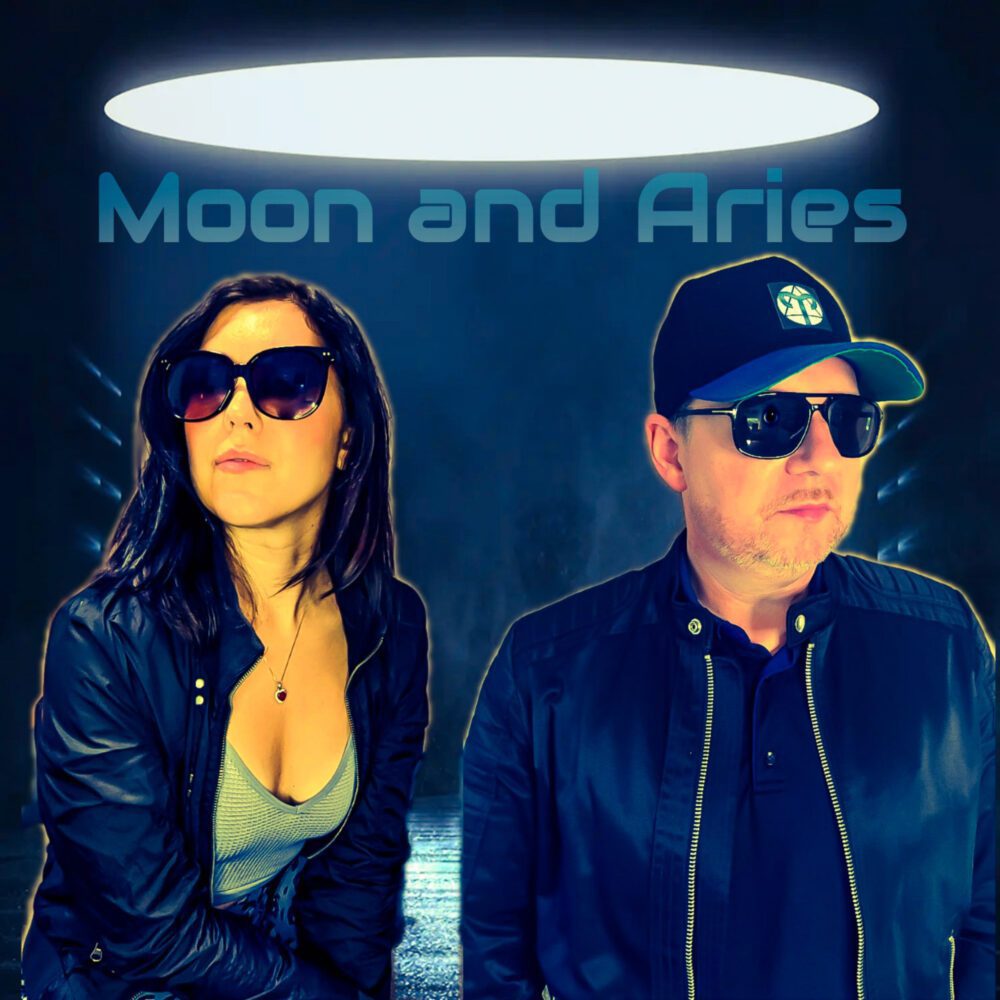 MOON AND ARIES. To bring warmth and assurance for a brighter future.

“At first, they Arrived. Then they activated Paradise. Now they “BREAK THE MATRIX”.

Moon and Aries are back with a big and bold statement. They will overcome the old World and build the new World with a fusion of nostalgic and futuristic celestial sounds, like nothing you have heard before. The self-proclaimed, Synth Pop Opera Duo have a deep driving desire to raise the vibrations and activate a higher version of reality with their music.

With Tom Aries’ memorable, seductive melodies and captivating instrumentals, blending with Jordana Moon’s thought-provoking and poetic lyrics and emotionally intimate vocals, they are back with a new Trilogy of music. A three-part music series, broken up into different episodes, Moon and Aries hope to hook you into their sensual, uplifting, and spiritually charged Universe of sound.

3 x 3 songs with a fusion of Electro Pop, Trip Hop, and cinematic Synth Pop – the dynamic duo has brought a slightly new vibe to their classic Synth Pop Opera sound. Expect music that is a little more confidential and closer to their chest. As they release, you will release and relax as you receive the upgrades.

Riding off the success of The Arrival album and Paradise EP, Moon and Aries keep striving to bring the most relevant music and stay at the forefront of the movement.”

So, it is. Moon and Aries proudly present:

Jordana Moon is a singer-songwriter from Western Canada. Composing and creating lyrics and melody with the goal to inspire and empower her listeners. Her approach to music is to mix a higher level of consciousness and concepts and bring these more philosophical ideas to modern music. Jordana composes her music with a wide variety of instruments, playing the piano, acoustic guitar, Bass guitar, electric guitar, mandolin, ukelele, and violin.

Tom Aries is an electronic synthesizer musician, songwriter, and producer from Western Germany. A composer of mostly instrumental tracks, analog, and digital synthesizer sequences. Tom`s music fuses his classical piano education with influences stemming from synthesizer sounds of the 80s.

He produced songs and sounds for computer games and soundtracks for short videos and films. Influenced by bands and artists like DEPECHE MODE, KRAFTWERK, JEAN-MICHEL JARRE, MASSIVE ATTACK, PORTISHEAD, RÖYKSOPP – and the sound of the 80s… – he created more and more songs, instrumental ideas, and music.

Especially the combination of pictures, films, and art with music have been Tom`s first creative base. Tom composes his songs mainly on the piano. After this first acoustic piano melody version, he is producing the songs within his little home studio.

Behind the scenes of MOON AND ARIES:

Jordana and Tom started the cooperation officially as MOON AND ARIES on MARCH 1st, 2021 – only working together via file sharing and communication across the ocean. (With 9hrs time distance between Canada & Germany = Jordana is still living in Canada and Tom is still living in Germany).

Played on over 100 radio stations in Australia, Europe, Africa, and America, incl. New York City Radio station in 2021 and 2022.

“Hey, this is TOM ARIES – 50% of Moon and Aries! Thanks, for having Jordana and me (MOON AND ARIES) in your great magazine!

Jordana (Moon) and I met on Instagram during the beginning phases of the pandemic. She is from Western Canada and I am from Western Germany. We still live with this 9hrs time distance. Perfect social distancing! 😊

Both of us were composing and putting out original music, looking to expand our community on Instagram. We were both instant fans of each other’s work– starting in March 2020. I was always looking to collaborate with other singers & lyrics writers, and Jordana`s original solo songs are based on a truly magical writing talent – transported by her very unique and fantastic voice.

I always hoped she would want to work with me, and after six months of friendship on Instagram, the right time came. At the end of summer 2020, we began to work on “Never Ending Escape”, the final song on the album “The Arrival” and our first song together.

Because that song went so well, we knew we had to keep going and see what we could unravel and create together. So, we became Moon and Aries.  And it was the best musical decision for both of us: music by Tom Aries and lyrics & vocals by Jordana Moon are the perfect match for a new music duo called MOON AND ARIES.

About our name: Jordana and I talked someday about astrology. We found out that she is a “Cancer with Moon in Aries”. And I am an “Aries with Moon in Cancer”. We talked about this “Moon” synchronicity for us and after Jordana “played” with the words in a way of “Moon in Aries – Moon and Aries” – we both directly decided to use this perfect band name.

Jordanas and my upbringing were similar in the way that we were both surrounded by music. It was a huge part of our daily lives. We both started playing piano at an early age. I had a classical piano education from age 6-16. Then, I went off to learn more about electronic synthesizers. I am still a huge fan of the synthesizer sounds of the 80s. Not surprising – as everyone can hear now in our songs.
Jordana also learned the violin and guitar, and then, of course, voice lessons.

Both, Jordana and I were in bands in our late teens, and early 20s – and Jordana was also doing theatre. She studied creative writing at Vancouver film school, and she enjoys writing music with themes of high consciousness.

Our style is in our opinion (and based on the feedback of some blogs, fans, etc.) a fusion of Electro Pop, Trip Hop, and Cinematic Synthpop. Jordana and I are both into nostalgia or the now-called “retro sound”. We also love the same movies and books. Especially the movies from the 80s.

We have similar tastes, which of course makes making music easier, but we both love and are inspired by ABBA, BeeGees, David Bowie, A-ha, Massive Attack, Portishead, Arcade Fire, Radiohead, Kate Bush, and even jazz and musical theatre! Of course, we are mainly influenced by the music of the 70s, 80s, and early 90s. The decades within our opinion – are best creative songwriting and storytelling. With many unique artists and their high-class music.

Jordana and I are always talking a lot about quantum physics, parallel universes, portals, and life. Or let´s say: What is waiting beyond life? 🙂

First, we talk about the concept of each song we wish to create. We talk about the full album or EP, and how to make sure the storyline has a nice flow and can take the listeners on a journey. We will have the title and concept first.

Then I start to develop a first composition idea for that. Sending the instrumental over to Jordana via file sharing, where she then writes the magical lyrics and finds the perfect vocal melody. Sometimes the songs take weeks to get right. Sometimes only a few days.

One day we talked about: overcoming the old World and building the new World with a fusion of nostalgic and futuristic celestial sounds. We have a deep driving desire to raise the vibrations and activate a higher version of reality with our music.
We decided to develop together a three-part music series, broken up into three different episodes:

3 EP`s with 3 songs each – a fusion of Electro Pop, Trip Hop, and Cinematic Synth Pop. With a slightly new vibe to our classic retro Synth Pop Opera sound. Expect music that is a little more confidential and closer to the chest. As we release, you will release and relax as you receive the upgrades.

There was a time when music really themed the collective awakening. Especially in the 70s and 80s. But we are happy to do this during these times too. However, the industry is more controlled and operated by certain people who might not want this level of awareness in music. So Jordana and I remain independent and make the music we are inspired and guided to share.

So much of the innovative, exciting, and good music is coming from indie artists and people are starting to realize this. We also think big labels will be a thing of the past. Most musicians just want to make a proper living when they’ve put in the proper effort. That’s what we want.

Honestly: The best time is the time when we are working on new songs and developing them together. This feeling of excitement and inner peace at the same time is really fulfilling to us.
We do not think that we are the best at what we do.

But we love what we do and are sharing our true inner core / our real emotions with our songs. We just want to reach the right people who feel connected to our music, emotions, and storytelling.

We both love to perform live on stage: So, we are hoping to realize this very soon. It is time for us to be more visible on stage and to share our music globally. To travel around the world and connect to people who love our music, and the meaningful lyrics – both coming from our inner heart(s) and soul(s). Toronto, New York, London, Berlin – we are ready.

The amazing lovely feedback from others about our music and how they feel while listening is the greatest success so far. Thanks for this to all the listeners! To receive messages from listeners that they always feel so much better during and after listening to our songs is the best.

We do not count only Spotify streaming numbers or try to reach a special number of streams. We are proud to now have one full album (THE ARRIVAL) and 2 EPs (PARADISE / BREAK THE MATRIX – Episode One) out in 2022. 17 released songs so far. Made with pure music/songwriting love.
And the next EP (BREAK THE MATRIX – Episode Two) will be released on NOV 3rd, 2022! 3 new songs and 3 new exclusive videos!”

You will find our songs wherever you can stream music. In all stores. Or just check our website: www.moonandaries.com for all the detailed information. Check our YouTube channel moonandaries for the videos and check our Instagram: @moonandaries. We will respond to every message!
We are enjoying the ride! Everyone is invited to hopefully feel connected.

There is no easy way out. Believe in your dreams and never stop making music. Find your own unique sound and do everything with love. Listen to your true inner core and share only real emotions with the listeners. It is not about sounding like the mainstream. Create your own sound and be the new mainstream. 😉