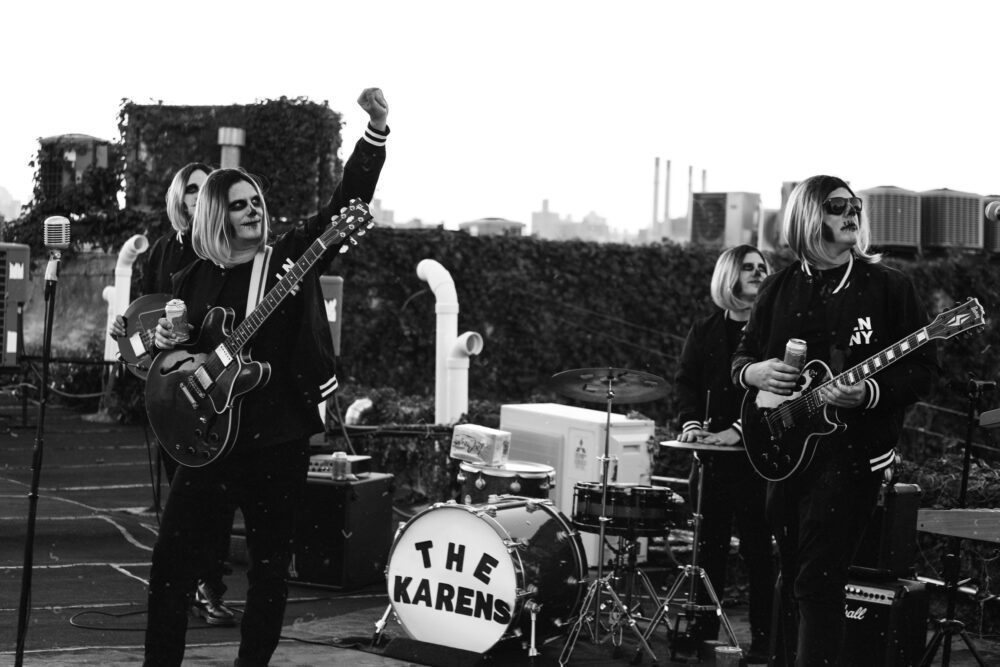 Meet Local Nomad, aka Michael Desmond, who introduces the music video “Karen,” a song about the self-entitled.

Posing as the all-female band The Karens, Local Nomad mirrors a “This Is Spinal Tap” production of The Karens’ last performance, which was shot atop a building in Brooklyn as an accolade to The Beatles’ final concert in 1969.

To imbue The Karens with bona fide personality, Local Nomad devised a backstory for the band:

The Karens’ conception took place during Reagan’s presidency at an IHOP, where the band’s originators, Kat and Kris, clicked while carping to the manager about the consistency of their pancakes, which were not fluffy. Recognizing one another as kindred souls, they decided to form a band, adding two more members.

The band’s musical chemistry resulted in recording and releasing a number of ballyhooed hit songs: “May I Speak To Your Manager,” “You Just Lost Our Business,” “Get Your Dog On A Leash (Or I’m Calling The Police),” and “I’ll Sue You.” Each successive song rocketed to the summit of the Top 40, providing The Karens with vast acclamation.

Because of their superstar status, The Karens soon found themselves sharing the stage with glam-rock and art-pop luminaries such as Twisted Sister, The New York Dolls, and The Talking Heads. After wowing audiences with their contagious sound for years, at long last The Karens separated, going on to other endeavors.

Still, The Karens’ unique sound and eccentric stance on societal subjects lingered in the memories of their fans. Under the umbrella of the latest administration, their reputation underwent a potent revival, leading to the band getting back together for one final encore performance – a concert recorded and captured on film on a rooftop in Brooklyn – a commemoration of the final concert of The Beatles.

The lyrics to “Karen” narrate the ongoing rational skirmish between Local Nomad and a woman he knows named Karen, whose perspective on life is problematic, housing thoughts of supercilious condescension toward others.