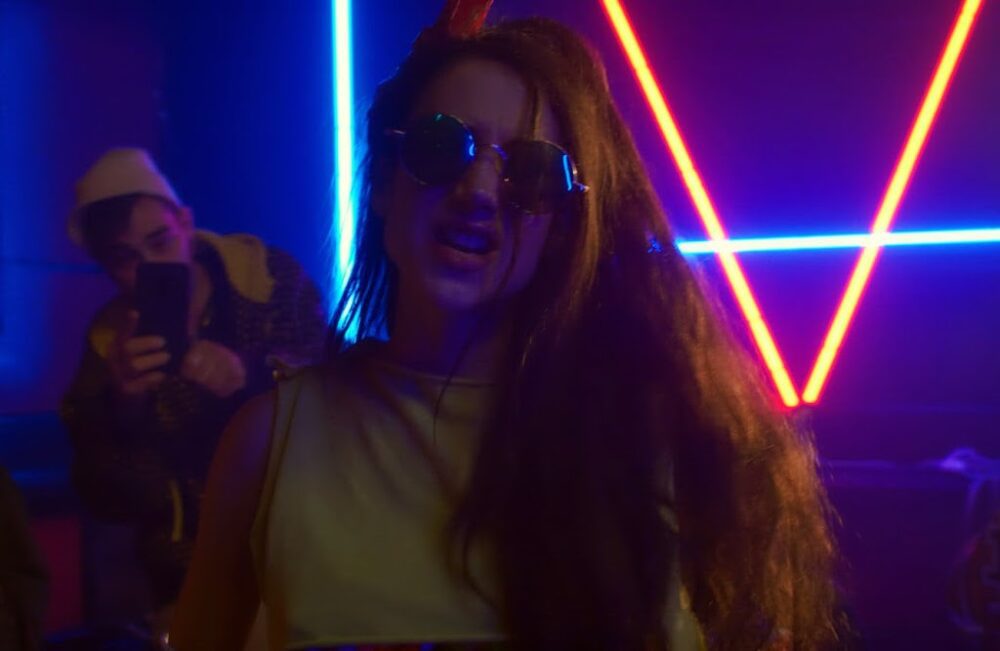 Lexa Terrestrial was recently nominated for best Hip-Hop Artist in the Pittsburgh City Paper, amongst male dominated nominee’s. Many of whom were her fellow collaborators & peers. She is sometimes coined the Lady Gaga of Rap, dressing in avant guard Harajuku haute couture, and having visually potent artistic Music Videos. Which are sometimes a bit too ahead of what’s going on in mainstream music currently. She first burst on the scene with a Music Video called “Ronald Reagan”, which was inspired by Mac Miller’s “Donald Trump”. In the track she talked about “tearing down walls” and ending mental limitations that she put on herself, referencing it back to when Reagan and Gorbachev tore down the Berlin Wall in 1989. The Music Video featured models wearing Reagan Masks and demolishing a giant wall constructed from Captain Crunch Cereal Boxes with sledge hammers. Some parts of the video are implied nude with digital hamburgers covering her, and a scene where she is swirling around in a bathtub of popcorn wearing a bra made out of popcorn along with a hair-bow made out of Orville Redenbaker Popcorn bags. But finding this video anywhere is almost impossible. The video was reposted on Worldstar Hip-Hop and was gaining plenty of views before it got taken down, with a request to make the video 18+.

Lexa Terrestrial is about to release a new project entitled “Chase Dreams Not Boys” which is a futuristic trap album that focuses on the the concept of women elevating their standards, and putting themselves and their goals first instead of appeasing people. Some of the tracks are self produced, and have production from Chris Barnett, who recently did the Kanye & Lil Pump track, along with many other iconic and diverse producers and features.

Around the release of her album, she is also releasing a 4 part docs-series – “(l)existential crisis”, in which she dives deep into sensitive territory about the struggles with crippling anxiety, depression and her suicidal thoughts. She tells stories about working with some of Hip-Hop’s greats, and a few occasions in which she was slighted or scammed. Which taught her a lot about not trusting people and having to be a real boss in this game.

She talks about how some men will often pull stunts to get sexual gratification. And how a lot of men around the scene help each other out, but often don’t include her, which can be very isolating. With the help of Allen J, a student at the Art Institute of Pittsburgh, they document Deutschtown Music Festival & her performance surrounding it, as well as a few others. They even run into an old friend Paradise Grey, a Pittsburgh Hip-Hop legend and former member of X-Clan. He shows Lexa his immaculate gallery of art and hip-hop memorabilia, displaying some of the greatest legends in the game.

Lexa has struggled to be respected for her art, but even though she is a female rapper, she places herself in every situation where women often are just seen rather than heard. She used clever, quick witted delivery, and raps both lyrically & fast over

hard impending beats. She prefers to carry herself as if her gender is completely irrelevant. Although she finds some to be crowds of guys.

She took 1st place in a Hip-Hop Competition in New York and went on to compete against another 400 people in Miami for the chance at $50,000. She placed in the top 30 but ultimately didn’t end up winning. However she plans on performing in Pittsburgh’s upcoming “King of the Burgh”, which is a Hip-Hop Series that DJ Afterthought has put together with Catalyst Collective. “When people tell me, they should change it to Queen, I tell them, no it’s fine, I want to be King.” I want to show that women can be King’s.

Although Lexa has a culturally strong fanbase in New York amongst other parts of the world, Pittsburgh is the sweet spot and also where she calls home. She hopes to inspire other women to unapologetically utilize the power of their wisdom and intellect.