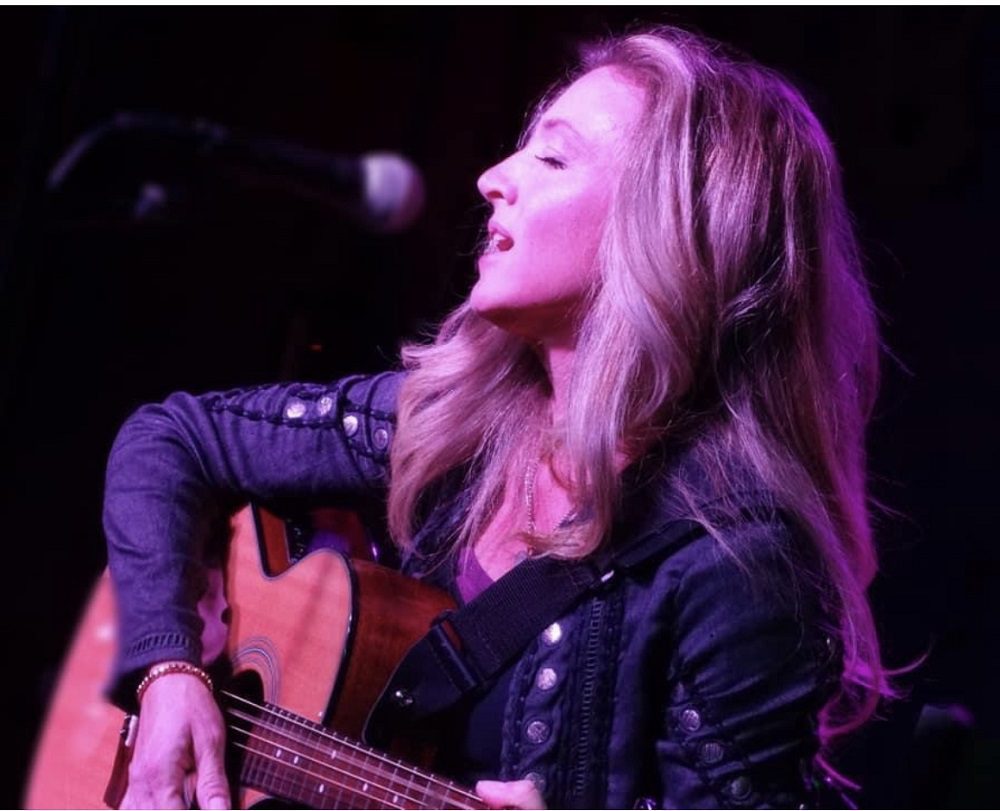 Jenny B.  is a Singer/Songwriter, Vocal Coach, and Humanitarian

Jenny B. has studied voice with top vocal instructors in the U.S. and has taught students that have gone on to successful music careers. She is currently writing and co-writing songs for Film and Television.

She writes for Fervor Records (Phoenix, Arizona), Thinks Music (L.A.), Mutiny Records (L.A.), and the Murrell Group (L.A.). Her voice can be heard on jingles, TV shows, Movies, and is on music in the Universal Music catalog (International).

Her most recent placements have included an original song ( co-write) in the Golden Globe-winning movie “The Disaster Artist”.  The song was co-written with producer Andy Gonzales and performed by Legendary Georgia Blues Hall of Fame and Arizona Blues Hall of Fame recipient Francine Reed.  Shutterfly and J. Crew have recently used songs co-written by Jenny B. for their national holiday advertising campaigns.

One of the promoters I work with started calling me Jenny B. and it just stuck and others around him started using that as my stage name!

Music has always run through my veins. My Aunt Cindy on my mother’s side of the family and my uncle Pete on my father’s side were very musical as well as my grandfather! I had always wanted to pursue a career in it. Being super shy never helped my career and I still to this day get so nervous before every single performance.

I’ve come to terms with it, that those nerves are never going away! But now these days it feels more like I’m getting ready to go on a first date, I love the excitement of stepping out onto the stage and starting that very first song in front of a new audience!

Performing all different styles of music throughout the years has really shown me what types of lyrics and songs that my soul gravitates towards. I really like Singer-songwriter albums because of the pureness that it radiates.

There are some great collaborations out there but when a songwriter is able to capture a moment in time and it comes straight from the heart… that’s my absolute favorite. So I think that naturally since I love that so much, I’ve tried to do that with my songwriting and with the way I deliver a song. Carol King is one of my favorites, James Taylor, Dolly Pardon Hank Williams…

With this current project, I feel like I’ve reached a defining moment in my career. I’ve written and had co-written songs for other artists and songs of my own have gone off to film and television. I have been performing cover songs for years in English and in Spanish. I’ve performed throughout the United States, Mexico, and Europe. I’ve never really focused on myself as an artist so this project is near and dear to my heart.

I’ve recorded some great songs in the past but I feel like this brand new CD that I’m working on really represents who I am today. I’m always shifting toward a better self and I feel like I’m able to really apply my heart and soul with honesty and vulnerability. I’m just really applying some of my life’s greatest experiences within these songs. After all these years, I just really long to be heard.

Not me performing somebody else’s songs and not my songs written for somebody else. My songs for me, my musical legacy that documents my journey in life. I’ve been so fortunate to be performing an amazing repertoire of music throughout the years, crafted by great writers and I am so blessed to be writing songs that other artists have recorded and they have just completely taken them to the next level…but it just feels like it’s time for me to get personal and to find healing in my own music now.

My greatest inspirations have also been my greatest challenges. My parents had instilled a great work ethic in me and it has helped me with my career because they always said that perseverance will pay off. We have to work our way through life so that ethic, that ethic has applied to everything in my life.

I learned to take life day by day, moment by moment at times, and to write about it when I can. I laugh when I cry and cry when I laugh. My first marriage, we lived in Belgium and my husband was a professional soccer player. I was a young mom and overseas I had written a whole book of songs that documented my emotions at the time.

Years later, I also had the privilege of touring throughout Sweden and during that time we started going into the prisons, minimum and maximum security and I really learned a lot about myself and about people.

My second marriage we had four kids. One of my twins died at birth and the other was born four months early with severe developmental delays. My surviving twin went on to spend almost 7 months in the NICU and came home with a trache and a seizure disorder.

All of my pregnancies I had terrible morning sickness, and I remember suffering through morning sickness right before many gigs. I remember puking my guts out in the alley or the bathroom right before the gig. Not fun times! Being a mom of five and having a daughter with special needs has been one of my challenges, it’s not easy to find time for a musical career. But when Music runs through your veins there’s no escaping it and thank God there is healing in it.

I am absolutely not the best at what I do but tomorrow I will be better than I am today. I strive for progress, not perfection and I just want to be genuine. I want to have true relationships and a real fan base.

I am so excited to finish this CD and release it to the world! I Will return to Sweden at some point when touring is an option again and get back to work in some of the prisons. I’d like to return to Thailand someday, to visit the children’s home that I co-founded for the displaced children of Myanmar.

I will most definitely continue to perform and speak at events that honor National Infant Loss Day. I also look forward to performing again on the worship team at my church.

Now….in my heart of hearts, I really would like more than anything to perform at the 2021 Josie Music Awards. This is a dream, not a plan but that’s what I’m shooting for, the stars!

I thank God first and foremost! I thank my kids for being my biggest fans, Donovan, Christian, Giovanna, Anabella and Julian. Thanks Mommy, Daddy, and Mama Karie! My sister Rachael and her beautiful family. I’m so thankful and grateful for the musicians who have worked with me over the years and helped me find my way and for bringing my songs to life…… you have taught me so much. Thank you Henry Archuleta and KUHS Denver. A huge thanks to Moses Jones! Thanks to Pastor Bob Cheney and my GrandView Community Church family and last but not least, thank you to The Josie Music Awards for making a childhood dream of mine come true by honoring me with a 2020 JMA.

I’d also like to take a moment to send out my sincerest thanks to my friend Deborah Jean Miller for all of your love, efforts and support… you are an Angel. Thank you Debbie Burkholder, Emily Cash and Sally Herren…. you are my treasured friends.
Vanessa Purdy, Andy Gonzales, Kregg Barentine, Michael Terry, David Passmore, Connie Tuck, Ulf Jonsson, Anders Mossberg, David Henriksson , thank you. Josie Passantino-Boone, Tina Passantino and the entire Josie Brands Network.

I’ve got my sights set on some pretty out of reach things but I am also blessed with the projects I am involved with here in Colorado Springs. I am a member of a newly formed band called Freeze Cat. It’s a great, fun group of guys that are Uber talented. Also, Doc and I ( Craig Loerzel) have a cool duo and we get to play every once in a while.

Josie Passantino-Boone, Tina Passantino, and the entire Josie Brands Network, THANK YOUssed with the projects I am involved with here in Colorado Springs. I am a member of a newly formed band called Freeze Cat. It’s a great, fun group with guys that are Uber talented. Doc and I ( Craig Loerzel) have a cool duo and we get to play every once in a while. Tom Young, Emily Cash, and I also play as a trio out and about.

I’ve got a television appearance on the Fox Morning to show coming up which I’m excited about, as well as a spot on KUHS International Radio. In the near future, we ( Andy Gonzales and Fervor Records) will resume working on another CD for the Legendary Francine Reed. “Music is Life! That’s why our hearts have beats……”!

I’ve got my sights set on some pretty out of reach things but I am also blessed with the projects I am involved with here in Colorado Springs. I am a member of a newly formed band called Freeze Cat. It’s a great, fun group with guys that are Uber talented. Doc and I ( Craig Loerzel) have a cool duo and we get to play every once in a while.

Tom Young, Emily Cash, and I also play as a trio out and about. I’ve got a television appearance on Fox 21 Morning television show that’s coming up which I’m excited about, as well as a spot on KUHS International Radio. I will also be working with JMA Award winning vocalist Jeremy Noble on an upcoming duet. In the near future, we ( Andy Gonzales and Fervor Records) will resume working on another CD for the Legendary Francine Reed and I will continue to work with Musicians on Call. “Music is Life! That’s why our hearts have beats……”!

You Tube. Jenny B Official