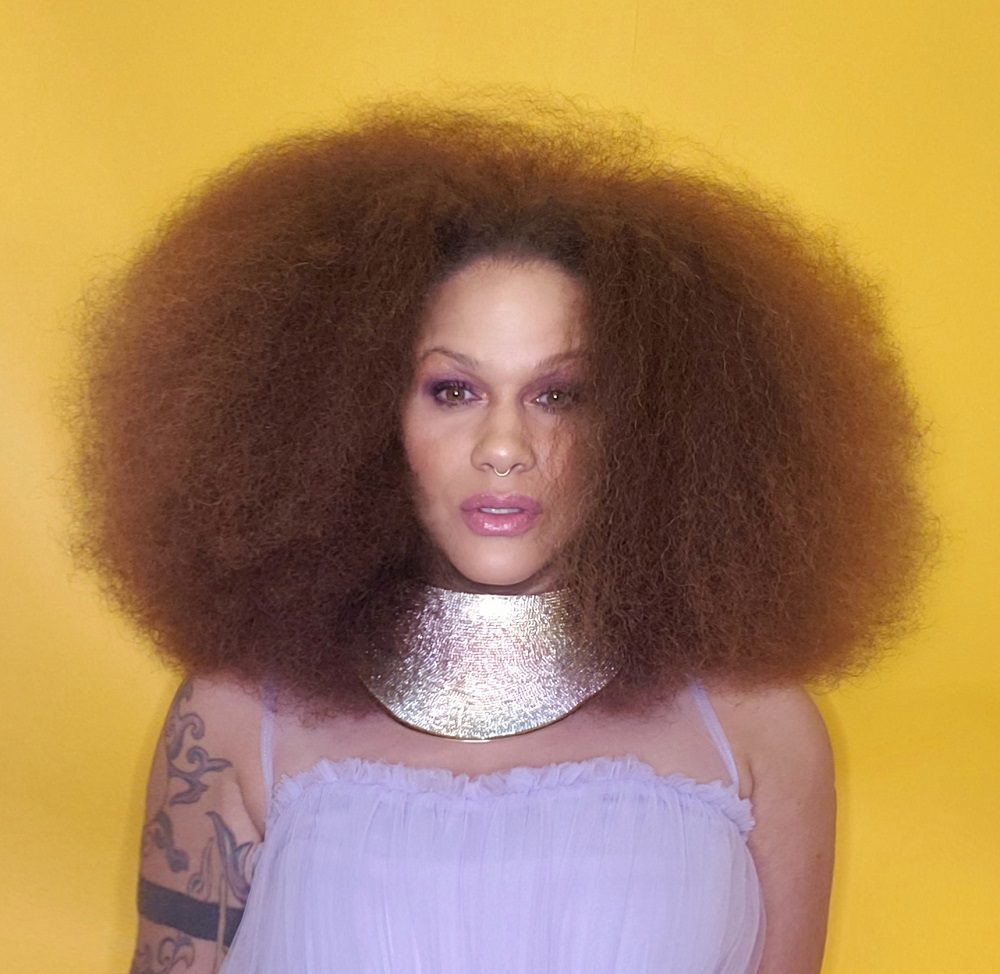 Ms. M|CHL is the living embodiment of contradiction. Her life, her music, and even her name all reveal her existence on opposite ends of the spectrum. Growing up a black girl in rural Oklahoma, Ms. M|CHL found solace performing in the church with her Grandfather, Mother, and brother beginning at the age of five.

At twelve years old she began writing songs and discovered the profound healing power music offered. It was her therapy, her escape, and her passion. While her earliest writings were largely inspired by her first influences of Prince and Whitney Houston, Ms. M|CHL’s work continued to evolve. By the time she graduated high school, her music was heavily impacted by her love for Nirvana, Soundgarden, and Nine Inch Nails.

After moving to Los Angeles, she began singing backup vocals for an array of Hip Hop artists (Strange Fruit), Blues bands (The Don Haney Band), and Latin Pop Singer, Mychaela. During this time, she was writing and recording songs with various guitar players in L.A., working tirelessly to have her music heard. In the winter of 2016, she was introduced to singer-songwriter David Moriarty (Earth At Night), and the two began writing together in February of 2017.

A year later they released Ms. M|CHL’s first EP, “Unrequited” on SoundCloud.com. The duo began performing the songs acoustic all over L.A. and Southern California in 2018 while writing her LP. However, it was at Ms. M|CHL’s first full-electric show at Pour Vous in Hollywood, they met Producer Jack Siege, who had just transplanted from Detroit to Los Angeles. Siege saw the show and immediately said “I want to work with you!” Two weeks later Siege was on board to produce M|CHL’s first full-length album, Anaxiphilia, released in June 2020.

Anaxiphilia perfectly showcases Ms. M|CHL’s melancholy yet soulful writing, and lush unconventional vocals, intertwined with influences of Soul, R&B, Grunge, Pop, Rock, Indie, and Electronica. It is an unexpected journey that speaks of a few trips to Hell and back and yet leaves you with a sense of triumph, hope, and romance. It certainly should not be missed. Ms. M|CHL’s debut album, Anaxiphilia is available on all platforms.

Ha Ha! That is a great question! My mother named me after both the ArchAngel and the Queen in the Old Testament of the Bible. This double entendre of names that are both male and female has proven to be very confusing to most people.

My name is pronounced like “Michael” but has been spelled in many different ways. I got sick of arguing with people about who I am and what name “truly” is. So, I removed all the vowels, in the end, to be perfectly clear:  this is me, Ms. Michl. So nice to meet you. ?

I have been singing since I could talk! My Grandpa encouraged me to sing with him in our church. My first solo performance for the congregation was at Christmas time when I was five. I sang “Away in the Manger” and by the time I finished I knew I wanted to sing for people for the rest of my life.

I was hooked! I began writing music at twelve years old and my drive only grew stronger. I have known for my entire life that music is my purpose and I am so grateful I get to pursue my destiny.

Prince and Nirvana are my first influences and from there I’ve been inspired by many artists. Alabama Shakes, Tame Impala, Robyn, and Odesza have all snuck into my style at various times. My latest album, Anaxiphilia, is very eclectic in its vibe.

I feel certain styles lend themselves more to certain feelings. My anger and hurt breakup song is full-on grunge and my heartbroken anthem is pure soul ballad. No one is one thing all the time. We all have many different facets to our souls and the expression of my Art is no different.

Anaxiphilia is a journey through a series of heartbreaks I experienced recently. When I met my writing partner and bandmate, David Moriarty, we started writing songs to just see how well we worked together. Neither one of us had any idea where it would lead! When we first started collaborating I was in a relationship and then I wasn’t.

Then I was dating, then I was revisiting old wounds, and so on for a year. The theme is simply a year in my life. It just so happens that this year included many things we all go through and pray we can overcome. I am hoping that my tale of love and loss helps others find the beauty in turning heartache into strength.

My greatest challenge right now is the time! We all work full time at day jobs and full time on music at night. But our hustle vibe is strong! David, Jack Siege (our producer), and I all work until we can’t see straight to get it done! It has also been tough being an unknown artist trying to make a name for herself.

The industry is changing every day and it is easy to feel lost or overwhelmed. I am very proud of my ability to get back up every time I’m knocked down. Giving up has never been an option. I know in my heart one day it will all be worth it. As Charles Bukowski said, “It has been a beautiful fight. Still is.”

Of course not! I am always pushing myself to improve and learn new things. Once an artist feels they are the best there is, that there is no space to evolve… my friend, that sounds like death.

The world is a crazy place these days! Unfortunately, my dream of touring immediately after releasing this album has been postponed. Hopefully, soon I will be touring the USA and beyond, as well as seeing you at all the festivals we are missing so much right now. We are also already writing the next album! So there is a lot of work to be done.

I owe a special thanks to David Moriarty, my writing partner, and bandmate. He put in so much work on this record, (he recorded all the guitar, bass guitar, AND drum parts!). He was a constant source of support and encouragement.

I wouldn’t have made it through those “sound booth breakdowns” without him. And I cannot forget my amazing Producer, Jack Siege! He believed in this record after seeing one small live show in LA. He truly was the missing piece to this creative puzzle. He breathed magic into the songs and everything came together better than I ever dreamed.*And of course, I love you Mama, thank you for literally everything. I am gonna make you proud!

My only suggestions are to learn as much as you can about the business and learn how to market yourself. Firstly, protect yourself by knowing what you are signing or agreeing to at all times!

If it sounds too good to be true, it is! TRUST!!!! Secondly, now more than ever, learn about music marketing! I don’t mean what gimmicky image you want to portray, I mean actual marketing. Target your audience and make them your fans!