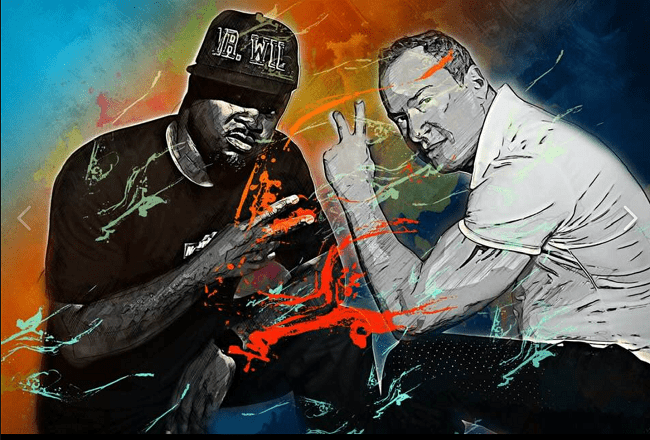 CHAIN BRIDGE is named after the street on which I and my partner in rhyme Mr. Wil attended high school. We wanted a name that sounded hard but would not typecast us or give anything away about the music. The best part is now anytime I drive on that road and see the street sign it makes me smile.

I think the greatest challenge, like with any brand, is creating awareness. Social media offers a lot of opportunities and that’s something we plan on attacking a lot harder over the upcoming months. As for work ethic, I think what people don’t realize is being a musician is 5% fun and 95% grind. Sure it’s fun filming a video, hearing your song on the radio, or playing a big show and having the crowd react. But you’re never going to get any of that without grinding. And grinding is not fun.

It’s not fun researching and reaching out to magazines and radio and venues when I’m tired and would rather be watching TV. It’s not fun practicing songs before a show or the studio over and over and over again so there is no doubt you’ll nail it when the time comes. But, you have to get in the habit of compulsively grinding and doing the stuff that isn’t fun or nothing is going to get accomplished.

Frankly, that’s why most bands are a few dudes who get together and jam a couple of times a week but never bring their music out of the basement. There’s a quote by Aristotle that I like, ”We are what we repeatedly do. Excellence is not an act, but a habit.” I think that sums it up.

Wow. I’m going to try and answer this question as honestly and with as little ego as possible. I don’t think anyone else is doing what we do. Chain Bridge’s special brand of hip hop combines so many different elements of hard rock, pop, old school rap, world music…I don’t know if we’re the best at what we do but for now, we are the only ones doing it.

We are working on a video for “The Problem is You.” The track itself is a conceptual critique of our buyer obsessed society and the video- which we’ve scripted and is now in the pre-production phase- is going to be off the chain. It’s very unique, very funny, and also quite thought to provoke.

On top of that, we are currently in the studio working on 5 new tracks which, at the risk of sounding immodest- are just huge. Our best music is yet to come and we’re really looking forward to the next time we play out with a several piece live band and a stage show which will include some special effects and other surprises.

Absolutely. First and foremost our fans. It’s the best feeling in the world when someone reaches out to us because they heard our song on the radio or saw us live and let us know our music moved them. That’s why we do it and all those endless hours of work leading up to a release or performance instantly become all the more worthwhile.

I’d also like to shout out to my partner in rhyme Mr. Wil- he’s an incredible talent and an unstoppable grinder. And then big props to the Chain Bridge Massive: our engineer extraordinaire Sean Russell, our amazing drummer Andy Hamburger, our awesome bassist Eric Scott, monster rappers Bud T and Josh of 6304, and my buddy Jeffrey Parish who actually has one of the most important jobs in the band: handing me my guitar when we’re on stage!

Also a big shout out to photographer and friend W. James Canty Jr. who shot and edited the pics for this spread And finally big ups to my old friend musician Rockin’ Rob Nasty Nilson who is always there to lend good cheer and a hand and keep the massive moving forward.

Well we are working to overhaul our social media but for now, you can find us on SoundCloud as The Chain Bridge Massive:

Grind. Always grind. And be original. Don’t follow the trend, don’t try to sound like anyone else. Don’t listen to the naysayers but accept and consider constructive criticism especially from those in the know. Partner with the right people. And every day try to improve. If you’re not better at your craft now than you were six months ago, you’ve wasted half a year.