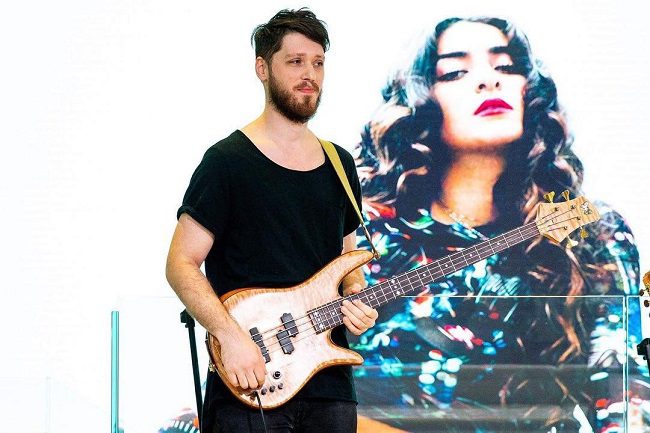 Akos Forgacs is a New York City-based electric bass player. Raised in Serbia and attended the local performing arts high as the very first electric bass player they accepted. Here he was awarded the many awards including an award at the national string chamber orchestra competition where he played the lead bass guitar.

At Berklee, he also had the opportunity to work closely with Paul Simon keyboard player Alain Mallet After finishing his studies at Berklee College of Music Akos moved to New York City where he maintains a busy schedule as a bandleader and sideman. He had the opportunity to play many big festivals as a leader and every year he is asked to come back.

Well, My stage name is my real name, so I guess I have to thank my parents.

I come from a family of non-musicians, but fortunately, my family used to listen to great music. So I was exposed to a lot of great music from an early age.

I always gravitated towards the electric bass but never really had the chance but at the of 13 I and my friend decided to start a band, he played drums so it was a good excuse to start playing the bass. That was the start of everything.

After a couple of months of intense practicing and learning songs, some local session musicians started to call me to play with them. That led to more successful bands and I realized that this is what I want to do for the rest of my life. By the age of 15, I was already working as a professional bass player in the local music scene.

When I just started out playing I was in a band with one of my classmates and we just played classic rock songs. That’s what we were into at that time. After a couple of months, I took lessons with some of the top session musicians in my country.

At these lessons, I started to discover that there is more great music out the other than rock and metal. I really got into Jaco Pastorius, Marcus Miller. After these, I got into the great rhythm section players like James Jamerson. So all of these players influenced me in away. I still like listening to rock and metal but also appreciate jazz, so all these styles made my own sound away.

After my high school years, I got a scholarship to attend one of the most prestigious colleges for music, Berklee College of Music.

Being an accomplished lead session bass player I have a great understanding of a lot of different musical styles. For my upcoming debut album, I gathered all this knowledge to come up with something unique for me.

I have played in 20 piece bands and all the way to solo bass, but I realized my favorite setting is to play in a smaller group. My upcoming album is going to be stripped-down instrumentation, only a guitar trio.

I think I have something unique to say. I don’t know that I’m the best at what I do is the right word, to be honest.

Currently, I’m planning to record my debut album, which will happen probably early next year and hopefully be out soon after. Also, I’m getting ready for some European festivals with some of the bands I work with as their lead bass player.

I’d like to thank all the big festivals that had me as a leader in the past. Without them, I don’t think I would be here where I am now. Also my teachers from Serbia and Boston.

Interview With Austria Hottest Up and Coming Rock Band “Mayburn”