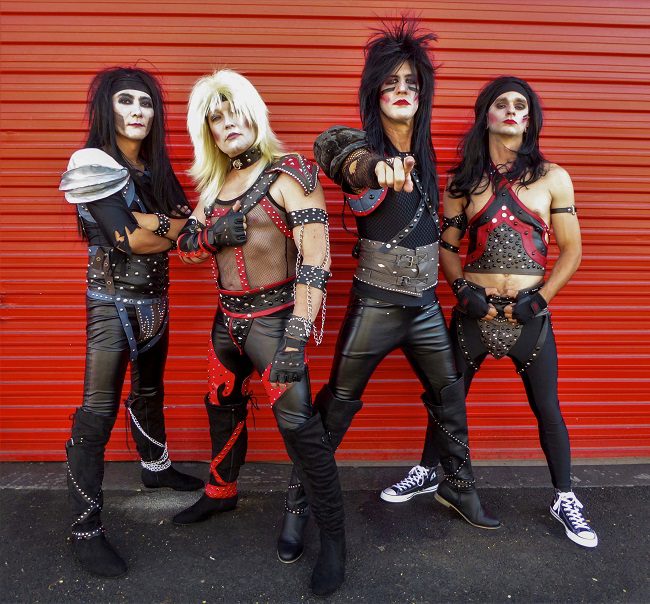 We had the pleasure of interviewing rock sensation STEVE HOTT to find out more about his early beginnings and new Las Vegas-based high energy show and experience, Mötley Nüe.

To kick us off can you tell us a bit about your background and life growing up.

Where did you spend your childhood?

So, growing up as a kid was kind of rough! I was born and raised on the streets. My street was Legrand Road in North Haven, Connecticut. After school, I would meet my friends at Green Acres Elementary school.

We would ride around in our BMX bicycle gang, travel about a mile to our local convenience store for a can of Dr. Pepper and a pouch of Big League Chew bubble gum. And man, if I didn’t make it home before the streetlights came on, look out – I wouldn’t get dessert after dinner!! It was rough…

At what age did your interest in music start to flourish?

At 6 years old, I wanted to take my love for music and performing a little further than just blasting my KISS records in my room and jumping around as if I were on stage performing for my stuffed animals. We had music lessons at our school but only for the 5th graders. I was just in 1st grade but could not wait that long.

After begging my mom for weeks to somehow make this happen for me, she went into the school this one dark day, I can remember it so clearly, busted down the door to Mr. Pinto’s office to show up for our meeting. I was called into the office and out of my classroom to face the seven-foot-tall giant that actually drove a Pinto as well! Lol…

True story. After the half-hour long debate, I was granted the ability to start drum lessons four years early, so long as I kept my grades up and made up any homework, I missed during my 30-minute daily drum lessons, then I could continue. Thanks, mom! Around the same time, I also took a chorus. We had performances and shows that took place in our small auditorium. Chorus was always the highlight of the show, which piqued my interest in music and especially singing even more.

Can you explain how you decided to form Mötley Nüe, the new premiere Mötley Crüe experience?

So, I have never been in a so-called “tribute band” before and it has never really crossed my mind to put one together or be a singer in one. However, while living in Los Angeles, I was approached by a Mötley Crüe tribute band who asked if I would be interested in coming out to see them play.

They had seen one of my shows and thought I’d be perfect for their Vince Neil. I declined as I was still in the studio at the time recording my own material, plus I just wanted to be a solo artist. Only a few weeks after moving to Las Vegas, I started to put my feelers out for different music projects and trying to get a feel for what this new city was needed for entertainment.

Las Vegas is so different than any other city in the world, made it a little challenging at first but soon enough I knew that if I were to do something in this city, it would really need to be spectacular, jaw-dropping and over the top!

Instead of trying to reinvent the wheel, why not just recreate that magical experience but with a show that has an amazing WOW factor and can never be seen again. Since one of the most iconic and controversial bands out there signed legal documents from allowing them to ever perform again as the original members all together on one stage, the choice was very simple.

To not only form Mötley Nüe, to perform the original music with amazing musicians that can duplicate the sounds and play the songs accurately note for note, but also take the visual aspect from two different eras of the original band and present it to the audience that has never experienced a Mötley Crüe show before, or to existing fans that would love to see them again but cannot!

What can existing Mötley Crüe fans expect from a Mötley Nüe show?

Crüe fans can expect to hear, and see, a live Mötley experience as if they were back in 1983-84 when the boys were just starting to launch, their extremely successful career.

They will not only hear the songs they remember on the first few Mötley records, played with extreme accuracy, but they will also see the same instruments used by the guys during that time frame.

All of the outfits worn on stage for the first set were replicated by one of their clothing designers in the later years, who also made the stage clothes for the second set. For the second set, and after the aerialists are finished performing during the short intermission, fans will get to see the later days of the Mötley show. Again, with the same stage clothes made by the original designer for Mötley Crüe.

The instruments are switched out to recreate, once again, the perfect visual of the new Mötley Crüe era. The audience will get to see and hear the Crüe from the ‘Carnival of Sins Tour’, all the way to some of their very last shows, including their residency in Las Vegas.

We have aerialists performing on stage during the second set, just as the original boys did. We too have a girl that performs with fire, a hoop and cube girl, two-pole dancers, and our hot backup singers and dancers. To top it all off, we have a custom-made drum riser that you need to see to believe. Of course, we had to come up with something over the top for our drummer just as Tommy Lee always did! And yes Tommy, we made it completely different!

How can people find more information on Mötley Nüe?

We are headlining at the Viper Room in Hollywood on August 10th. Tickets are still available here. It will be an epic show. Come down and say hello!

That’s about it – thanks so much!