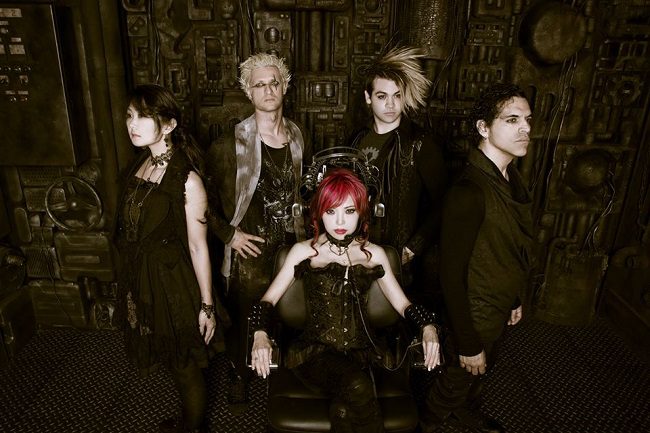 Rayko is a Tokyo-born Los Angeles based composer, vocalist, and a multi-instrumentalist. Rayko knew of her career of choice for life at the age of five, and she moved to the US  at a very young age to pursue her dream. She has never stopped writing from the very first pop piano composition she made at the age of 5.

Her vocal technique consists of Pop, metal, death metal, opera, classical, jazz, and even cross over country. Rayko plays piano, guitar, and drums; she is currently learning the Japanese Koto and electric violin. Her library now consists of 100’s of songs, in styles anywhere from ABBA to ZAPPA. Rayko was signed to Spark Record (distributed by Universal) in Japan.

Lolita Dark is an Epic Rock band with roots in Southern California and Japan, formed in 2012. Fronted by Shibuya-born singer/songwriter Rayko, their sound and visuals depict a world of light and dark, East meets West, and past meets present. Their sound weaves together crunching guitar riffs, progressive baselines, lush harmonies and complex melodic structures in songs that reflect both the angst and optimism of an increasingly interconnected world.

In January 2015 Lolita Dark was invited by NAMM (The National Association of Music and Merchants) to hold a panel to discuss their success, and in July Lolita Dark signed a 5-year exclusive recording/distribution contract with Sparks Japan for the entire East Asia Market including Japan, Korea, and China.

I changed the Japanese spelling of my name Reiko, to Rayko so that everyone can pronounce it correctly lol I named my band name Lolita Dark because after fronting two other bands I finally decided to have an autobiographical band to my life, and produce music that projects all that I’ve gone through from my childhood to an adulthood. Lolita – because my life circumstances forced me to grow up fast. Dark – because I battled thru a ton of dark times.

After some very distractive period, I went thru at an extremely young age, I became a straightedge. Music has always been my best friend, my fix. I remember the countless amount of nights where my drummer and I would be uber depressed and I’d play classical piano music endlessly to ease our pain and anxieties. I faithfully believe that God has gifted me this path to follow, and I knew since I was 4 or 5 years old what I wanted to accomplish in life.

I write probably 3 songs a week on a slow week lol Currently I have about 42 songs waiting to be recorded. There are a couple of projects I want to talk about. One of them is “Gratitude Video”. It is a compilation of spiritually relaxing and motivating music series accommodated by videos that are put together beautifully and thoughtfully that projects what the messages behind each music.

Every song has relaxing and energetic versions to it. My co-writer Frank Kilpatrick, a Grammy-winning producer Alex Wand, my band members Rain Balen, Joey Felix and I have been working on this since summer last year. I am very excited because I truly believe this series can deeply touch people’s souls and live moment by moment rather than dwelling and prolonging stressful times.

Also to bring positive perspectives into our lives, and not comparing ourselves with others… count all blessings in our world. Frank and I are also deeply involved with our Suicide Prevention video called “Stay Alive”

My band Lolita Dark has been embraced by the Anime, Gaming and Cosplay community since we debuted in 2012. I was inspired personally, by getting messages from our fans and supporters over the years to learn, how many people in our community that is depressed, despaired and actually experiencing suicidal thoughts.

I went to Frank about this and he not only so generously jumped on board with me to do something about it, but he introduced me to Dr. Mark Goulston who is a Dr. Oz Health Corps award-winning doctor who has been a suicide specialist for over 20years. Then Dr. Goulston introduced us to Kevin Hines who is one of the only 1-2% who survived jumping off of Golden Gate Bridge. Frank got the team of people to produce this incredibly educational documentary video “Stay Alive”.

Stereotyping could be a blessing and a curse. Because of the variability of my vocal styles, I get a lot of session work, and because of the versatility in my writing styles, I also get hired as a composer. But until people actually hear me they still see me with their eyes, as an Asian female.

They assume I’m either one trick pony and/or a person who thinks she can sing. I am an emotional conduit with a pretty good ear. I hear a song once and I know it. That really works well for session works. I constantly hear songs in my head to write. So when music supervisors give me a direction for what they need, what scene, era… I can work and deliver the mastered recording fast.

I am best at connecting my heart to others 🙂

My dream will be coming true on Saturday 6/1 as Kevin Hines and I will have our very first panel at an Anime Convention called Anime Conji in San Diego California!

I’d like to thank my right hand AiRain Balen, left hand Joey Felix, Grammy-winning producer my collaborator Alex Wand and of course, my co-writer and the executive producer of “Stay Alive!” Frank Kilpatrick.

LolitaDarkMusic on all social media except our SoundCloud is LolitaDark.