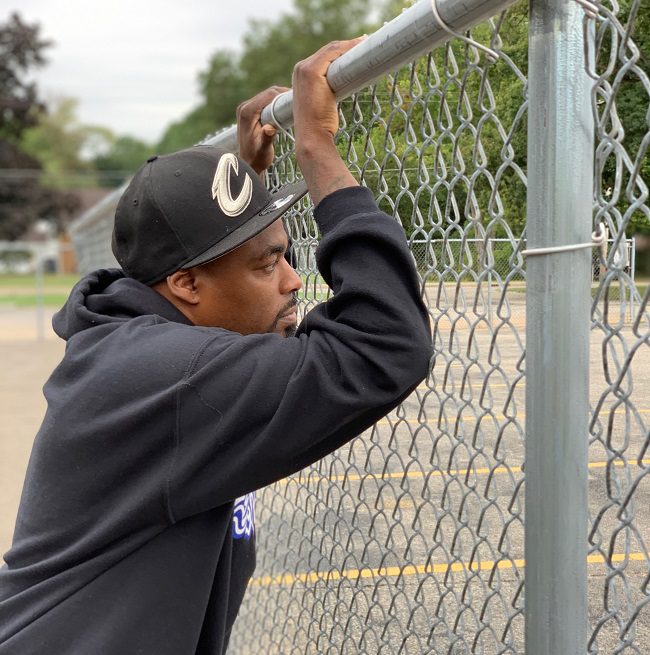 CAPO KINFOLKS ALLDAY, born Christopher Abrams, is an inspiring artist from Gary Indiana’s west side. Being the middle child and only son, CAPO (FOR SHORT), started the love of music growing up listening to Michael Jackson. Later, in elementary and middle school sung and rapped in plays, and took on dancing to house music as a hobby.

By the time he reached high school, he started rapping in at house parties and in ciphers at school until noticed by a neighborhood rapper and was asked to record a track, which soon formed the group KINFOLKS, a rap group from Ivanhoe Projects in the 2000s.

Throughout the years the group has done local and regional open mics and a slew of shows. CAPO has been featured on SNAPN’ OFF ENT.’s “GARY LIFE “ in 2002, then collaborating with a familiar CHILL WILL and P.I.M.P. from the group 3rd DEGREE to make another compilation album labeled “BOYZ ON THE BLOCK” in 2005.

From then to now he has been on numerous mixtapes that have been produced by known producers such as FINGER ROLL, DEAD BODIES (BODIES ON THE BOARDS), RIO IN DAKITCHEN, XO IN DAKITCHEN, MAJOR WANG, and MENACE. CAPO’s last album, “STRUGGLE AND SUCCESS” came out in 2016. Now president and CEO of MIDWEST KINFOLKS MUZIK ENT., Inc.

He’s since then has opened for artists’ JELLYROLL, PSYCHODRAMA’s PSYDE and BUK and performed at Atlanta’s A3C and Austin’s SXSW as well as COAST 2 COAST. His influences are mostly legends such as E-40 2Pac, Outkast, MJG, Ghetto Boys, Twista, and TI.

His Midwestern charismatic flow is unmatched, which comes off as headstrong and cocky, yet mindful and relatable. CAPO has the type of sound that can fit in any subgenre of rap, whether it be cautious, party, or gangster, he’s able to put it all in one, and make it a hit. With a Midwest background, CAPO KINFOLKS ALLDAY is a sleeping giant, ready to take what’s owed to him.

Well, my original stage name was C.R.U.S.I.F.I.X … CAPO is what they called me in the streets. I am part of the Gary home-based group called KINFOLKS, and I represent that ALLDAY… hence the name CAPO KINFOLKS ALLDAY.

When I met TANK G (KINFOLKS group member) he took me to the studio for the first time after hearing me freestyling at a party. Before then I always daydreamed about getting noticed, let alone record a real track. Once I heard my voice through those speakers I knew rapping was something I wanted to take seriously. I began to make it a career choice ever since.

There are a number of rappers whom I get my sense of style from or help influence it anyway. 2Pac, MJG, E-40, TI. TWISTA, SNOOP DOGG. Above all, I think my sense of style mostly came from ME. Being from personal experience and having my own sense to do it my way.

It wasn’t hard. A couple of years ago I ended up going down the same road I was trying to help get people out of- DEPRESSION. I mean I’ve had problems and hard times like the next person, but everything started hitting me from all directions and my little words of advice weren’t helping at all.

I was so low I was far in the deep end. I just wanted to stop doing EVERYTHING. Crying in my car one night I played a song off my mixtape STRUGGLE AND SUCCESS that was meant to uplift others… it sure uplifted me! I thought how would it be for me to give up and there’s someone out there that didn’t. Just because this song helped them? I looked in the mirror and said to myself “CAPO you gotta get your mind right! ”

I made a promise to myself to do just that. No matter what. And if I can focus better, I can get my ground right also to get to where I wanna be.

One of my greatest challenges is learning not to take certain things personally. It’s hard having a good relationship – personal and business, and it seems everybody is out for self. Especially when it comes to the rap scene. You try to be professional with those who got expect to be professional themselves, and it seems like it always goes towards favoritism, pride, or some way to get over on somebody.

Another is learning the business from the ground up. I am president of MIDWEST KINFOLKS MUZIK ENT INC. .. ..and getting the T’s crossed and I’s dotted to make sure your not cheating yourself and others is a hefty task, but It’s coming along, thanks to all those years working different jobs learning a little here and there about certain paperwork and guidelines. I always want to know how business works even if I have to start at the bottom with the labor.

Hahaha.. the best? Let’s just say I feel like JJ on GOODTIMES… I’m the best at what I do because no one else can do ME like ME! You can’t compare me to anyone because I’m a pimp in my own rhyme. Everybody has a swag… but my get down is CRAFTED. Genuine. So yeah I’m the ish.

Tours. Tours. Very good recognition by bringing attention back to the midwest..and achieving every goal that’s already lined up.

First and foremost, I thank the highest for my sense of consciousness and the will to not break or fold during my struggles. My KINFOLKS TANK G because he helped me with one dream that opened doors to believe in everything I do. And last but not least. Myself. #MINDRIGHT/#GRINDTIGHT Available on all major streaming platforms October 13th, 2019!