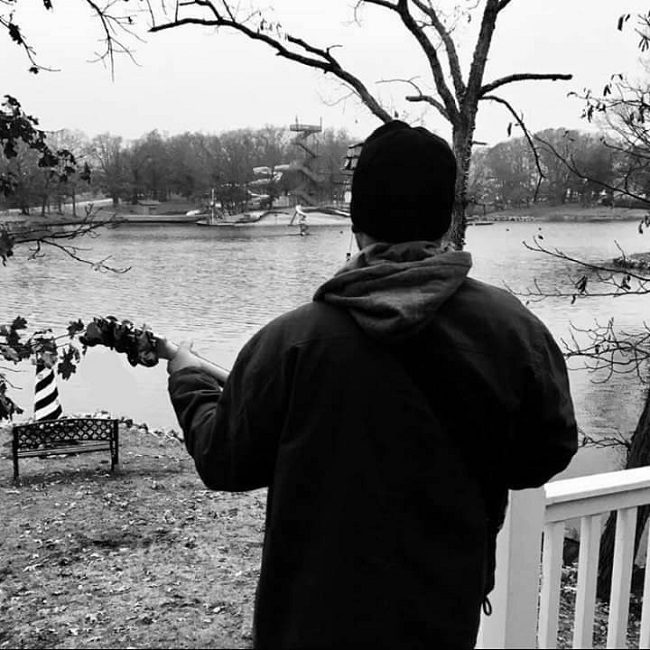 Gage Blevins, aka 12Gage is a Blues guitarist from Panama City Florida who studied music production and music education in college as well as audio technology for radio broadcast. He started playing guitar at 16 years old and quickly branched out to other instruments and made his own business.

When the BP oil spill wrecked the economy of the Panhandle of Florida 12Gage, along with many musicians, could no longer make ends meet. He pursued professional security, EMS, and a career in mental health while working on solo material and producing new albums.

Hurricane Michael in 2018 caused a drastic change in scenery for him as his home and everything he knew had been destroyed and had to move up to Illinois with the family to recover. It is in this time that ‘Baron of the Blues’ and ‘Heroes Often Fail’ were finally addressed and finalized.

About a decade ago when I started playing music live with my own band I chose ‘The Deep Blues Band’ as my group name and made it an LLC because business was good. The Emcee of the event did not know how to pronounce Gage so the promotor of the event shouted ‘Like 12 Gauge’ so the Emcee announced ‘And here’s 12Gage and The Deep Blues Band.’ and the rest was history.

There are many worse nicknames I could have acquired but I believe this one to be fitting because many blues musicians have an alternate name or additive to their name. IE Sleepy John, Muddy Waters, Keb Mo, Blind Lemon Jefferson, etc.

I must first define my craft. My present-day craft is being a studio musician playing all of the instruments on my own for my home-recorded albums. This craft grew on me over time due to a variety of factors such as time constraints and distance constraints with musicians Id try to work with or hire, as well as proficient musicians not wanting to follow a very specific creative outlook.

I am still trying to make my craft a career one slow step at a time while I balance being an EMT and Direct Support Professional for developmentally disabled individuals. I realized that I want this as a career over time when I would win various contests for lyrics, short stories, or original compositions as well as the people I would meet on the travels and the setlist I would play or original topic matter would mean a lot to various audience members and I would hear very personal stories that were only brought to mind by my performance.

This is an easy to answer question albeit a lengthy one. From the beginning when my father taught me chords and a dozen songs, Eric Clapton’s songs influenced me the most. His guitar playing and songwriting across various genres astounded me. He can do blues, rock, reggae, techno, country, jazz… you name it.

Warren Zevon is the second name because he was the second influence but he has become the most prominent. He is revered by many as one of the greatest rock and roll artists of all times. Stephen King, Bob Dylan, David Letterman, and many many more have been influenced by him.

He plays most of his own instruments in the studio the way I have come to do and does not shy away from dark and twisted lyrical content but not for shock value, but for added realism in his story-driven music. One of my goals long term is to keep Warren in everyone’s heart for a little while longer.

In later years after delving so deep into blues and lesser popular top 40s songs that the rival bands never played I discovered Leonard Cohen. His spoken-word style vocal approach gives me a sense of relief for my style because singing is one of my weaker attributes so to see someone craftily speak through a gorgeous instrumental arrangement was a breath of fresh air. Finally, there was another musician who had darker tendencies.

Like Cohen said ‘You Want It Darker’ Tom Waits had become the black sheep to my fan base due to his eclectic and surgical instrumentation as well as growly and unconventional vocal style and lyrical topic matter.

The last of the mentions go to Gordon Lightfoot, my latest influence. Gordon’s music came to me at a time of illogical drive for perfectionism as a solo artist using a loop pedal and a guitar that had both acoustic and distorted electric options. My setlist had very tedious song choices that most 3 piece bands didn’t do but I chose them as a solo act. Gordons earthy, living-life song style immediately clicked with me and brought me back to a place of enjoying rhythms, melodies, and leaving all the fancy sounds behind time to time.

On your current, how did you come up with the concept?

This present project was actually supposed to be one 2 disc album called ‘Heroes Often Fail’ based on the line from a Gordon Lightfoot song. about two years ago I had had enough of a dry spell and had enough of musical politics that I wanted to write music exactly for me, from my perspective, without worrying about opinions of others when at this present time opinions are all that most indie musicians have to rely on, destroy it and continue enjoying the day job and bitterly reminiscing.

Many of these songs fit a blues format whereas the others don’t really easily fit into any category. With the guidance of my manager Suz Holmes, Hubert Sumlin’s’ former manager, The blues songs became their own entity instead of an afterthought and became the first release that has since allowed me to take first place in Eric Clapton’s Play Crossroads Contest.

I utilized Tom Waits’ approach with voice and surgical instrumentation vs standard band play through, Cohens spoken word and relaxed demeanor on some tracks, all of Warren Zevon’s talent was an influence as lyricist and instrumentalist, and Clapton’s phrasing and Stratocaster/ Blues amp combo for the sound for an eccentric bluesy sounding original project.

A few of the challenges include putting what I ‘hear’ in my mind properly onto a single song file on my device to listen to. If a song is 4 minutes long that means every instrument is 4 minutes of playing if I do it correctly. One reason this project took over two years is if one instrument was off it was not immediately known or even all the way up to putting the final mix together.

This would be very disheartening and make me lose interest for weeks at a time. Another challenge is the time alone it takes to do all of this; in the last year, I have lost nearly everything I own in Hurricane Michael so I had to replace gear and repair gear to get back up and running at the bare minimum.

My greatest attribute with work ethic is persistence. I take breaks but I always find a way to complete my projects and deliver a great live performance. When playing live I use a loop pedal with my acoustic guitar, play harmonica, then piano or electric guitar, then back to acoustic and finish the song.

Nowhere near the best. I do recognize that not many people studied music education and music production to become fluent in many instruments for home studio purposes. I had been offered a very low paying multi-year internship but right out of the gate I could invest and record artists myself for higher capital and lower fee than those offering the internship.

I can only go by opinions of others such as the opinions of the representatives of the Crossroads Guitar Festival, Ernie Ball, and Guitar Center as well as Blues411 and a few other entities of which I have won or placed highly in competitions. To be the best is a good idea in the back of m mind but not something to strive for lest I want to be let down and allow myself to become arrogant with a smidge of success. Arrogance in music is moronic.

I have met many many people who play an instrument or sing better than anyone I have heard on the radio or paid to see in concert. I will always attempt to humble myself and continue to learn and perform together, not against.

I hope to complete ‘Heroes Often Fail’ in the next several months as well as indulge other opportunities such as the one I have with your publication right now. I also plan to thoroughly enjoy Capton’s Crossroads Festival and a Gordon Lightfoot concert in the upcoming weeks.

I’d like to thank my father for being my biggest fan and supporter. Suz Holmes for her steady-handed guidance, wisdom, and encouragement on this project. without her, it would not have won the accolade it already has. My mother: she passed away over a decade ago but with her death came the unique opportunity for an all or nothing start-up into music. A dark and twisted and very unfortunate trade-off.

Mike Finnigan, Keb Mo, Bobby Whitlock, and Jordan Zevon. These individuals have helped mover the last decade with feedback, conversations, friendships, and memories that truly boosted my mental state to assure anything is possible with dedication.

Shout out to Robert, Sam, Ally, Amber, Aaron, Stace, Bridget, David, Robbie, and last but not least Darin: I love you all dearly and I appreciate all you have done for me and your support. Too many people have passed away close to my life to fit in this area. RIP my brothers and sisters.

I have a multitude of social media.

Facebook.com/12gageblues for my music page

Find yourself. Don’t let others define you because as many people that dislike what you do there’s guaranteed to be just as many who believe in you for what you are. Have a day job, have a part-time job, have some kind of crazy job you never expected to do.

Much of my influence comes from being a security officer in a hospital. many crazy stories. If you lean too hard on the talent to bring the money home and unforeseen circumstances halt that it will be a major emotional blow and fans will surely be able to hear the tension in the playing. keep it a passion, be persistent and listen to the sunscreen song by Bay Luhrmann.