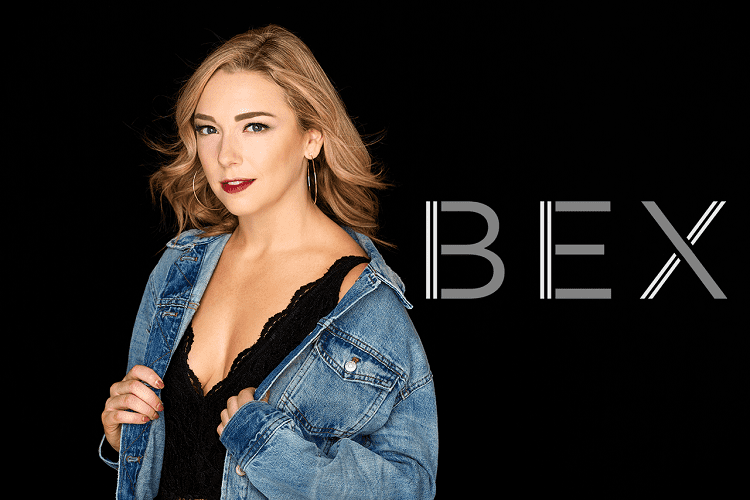 BEX is a Boston-based singer-songwriter whose music spans multiple genres, including pop-rock, R&B, and neo-soul. Some of her influences include Lissie, Hozier, Banks, Bishop Briggs, and Stevie Nicks.

Her debut album, Sink or Swim, released on January 25, 2019, and can be found on iTunes, Spotify, and other platforms. The EP was made with love, sweat, and tears at Plaid Dog Recording in Allston, MA.

Prior to recording her first album, BEX attended The Boston Conservatory at Berklee (2017), where she received her M.F.A.

Beyond singing and songwriting, BEX is a full-time freelance journalist who has contributed to such publications as HuffPost, Elite Daily, U.S. News, and The Food Lens. She is also a UFC-trained kickboxer.

I started writing music when I was about nine years old — the first song I wrote on a tiny electric keyboard I hid under my bed was called “Wild River,” and it was a folky kind of ballad that followed me around for years because my mom would make me sing it at family events (until I refused out of embarrassment, of course). Throughout junior high and high school, I did quite a bit of singing — in a choir, a cappella, and just on my own. I wrote all the songs for a handful of musicals my childhood friend and I put together in Houston, Texas, and performed locally.

I also played a variety of instruments, from flute and acoustic guitar to piano. My love of music was always sorted off in the background, lingering, but for some reason, I didn’t really consider pursuing an actual career in it. I don’t think I was confident enough. That confidence came later, in graduate school.

During my high school and college years, I was writing a lot — not songs, but articles, short stories, and scripts. I began pursuing screenwriting, and then, journalism. But while working as a technology reporter for a local Boston publication, I realized how much I missed music. On a whim, I decided to audition for a master’s program at The Boston Conservatory of Music at Berklee and was stunned when I found out that I was one of 12 accepted to the program. That kind of sealed it — I took it as a sign that music was unfinished business for me.

So I quit my job and dove headfirst into this M.F.A program, and while studying at the Conservatory, I began writing songs again. There were many, many late nights in the practice rooms, just messing around on the piano. By the time I graduated, I had written a full album’s worth of songs. And then within weeks of my graduation, I connected with a producer at a Boston-based studio who liked my music. That truly felt like fate.

Both of my parents are pretty musical people. They both taught themselves how to play guitar, and my dad played drums when he was younger as well. During her 20s, my mom had some regular gigs at various Burlington, Vermont bars playing songs by Joni Mitchell, Laura Nyro — incredible female artists along those lines.

She taught me a guitar (which, unfortunately, didn’t stick — I ended up switching to piano), and encouraged me to take voice lessons once I took an interest in singing. Not only that but both my parents were almost always listening to music — in the car, while cooking dinner, dancing around the living room… for my dad, it was a lot of Jackson Brown and Jethro Tull, and for my mom, it was a lot of Fleetwood Mac.

Subconsciously, I think both Stevie Nicks and Bonnie Raitt impacted my own musical style — Stevie on the rock side of things and Bonnie on the blues side. Their lyrics are so poetic and so heartfelt. And both of them have this captivating attitude that oozes through their lyrics and performances — a certain kind of swagger that I’ve always admired.

These days, I would say Lissie and Hozier have both been major influences on my music. Lissie has a really seamless, beautiful way of blending blues, pop/rock, and country and her voice are so unique — it cuts right through you. Hozier also merges blues and rock in a similar way that I endeavor to, but he also adds these elements of soul and gospel, which are what make him stand out.

I think what we did on my album with the backup vocals and layered harmonies captures a similarly haunting gospel-like quality. I also think Hozier’s music has this brooding quality that’s dark without losing hope, and I hope that comes across in my music as well.

I think my number one goal in everything that I create is to make people feel less alone. That’s why I write. A couple of years ago, I wrote an article for HuffPost about the crippling nature of perfectionism, and how I overcame it. A while later, I received an email from a man who told me that the article made him feel understood and that he thinks of it every day. That’s what I strive for in my music.

At the end of the day, I want listeners to be left with that same sense of feeling understood. Some of these songs grapple with painful topics — toxic love, addiction, guilt or shame over the past… these are the things that make us feel isolated, and yet they’re all such a common part of the human experience that we all share. Hopefully, this music sheds light on that.

When I’m not writing or singing, I’m often working out. I like to stay super active because physical activity gets me out of my head. For years, I was focusing on boxing and kickboxing, and training with UFC. That was exhilarating — in a way, it was almost healing. Boxing requires a lot of mental focus, which almost makes it feel like meditation. Lately, I’ve just been doing a lot of strength training.

I’m also a full-time freelance writer, which keeps me on my toes because I learn about new things every day in the research process for blogs and articles I’m assigned. And I enjoy traveling a lot. I have yet to get out of the U.S., but I make it a point to visit as many new places as I can, even if it’s just a quick weekend trip a couple states away. Traveling is often the best inspiration — being in a new place, around new people, eating different food, can really shake up your mindset and trigger fresh ideas.

When I think about the vibe of this album and my music in general, the image that comes to mind is a light at the end of the tunnel. There is undeniable darkness to these songs, moodiness and a sort of jaded attitude — but at the same time, there’s hope. The lyrics in the bridge of “Clean Break” say it best: “Tomorrow is another day, and we will rise above the ruins — conscience clear, a lifted weight.”

I wanted this music to inspire people to acknowledge their dark tunnel, the things that are weighing them down — whether that’s guilt or regrets or fear or self-doubt — and find light and a sense of freedom in letting go of those things.

Sink or Swim, which just released on 1/25/19, is my debut album, and it blends alternative pop/rock, neo-soul, and R&B with a heavy dose of blues. I wrote all of the songs on the EP over the course of about four months when I was fresh out of grad school at The Boston Conservatory.

Don’t try to sound like anyone else. I know you think it will make you more marketable, or more commercial sounding, or somehow more appealing to a wider audience. It’s the biggest mistake you can make. Figure out what makes you uniquely you, and then milk that 1000 percent. For me, the epiphany came when I got a call from my producer, who had been listening to our latest mixes on his drive into work. He said, “you know what I just realized? You use your voice like it’s an instrument. I haven’t heard anything like it before. That’s your trademark.” And with that, we revisited every song and considered how we could leverage my voice more, by adding more layers of harmonies, or counter-melodies, or backup vocals. Figure out what that thing is for you, and then really hone in on amplifying it so that you stand out.

I’d also advise indie artists who are just starting out to do a ton of research on marketing and self-promotion. It’s so important to have a polished press kit and to be savvy about how to submit your music to blogs, radio stations, etc. It can be tough to get noticed, but you just have to A) give the impression that you take your music seriously and B) know what these outlets are looking for. Oh, and have good music, of course. But honestly, having a solid understanding of how to market your music is priceless.