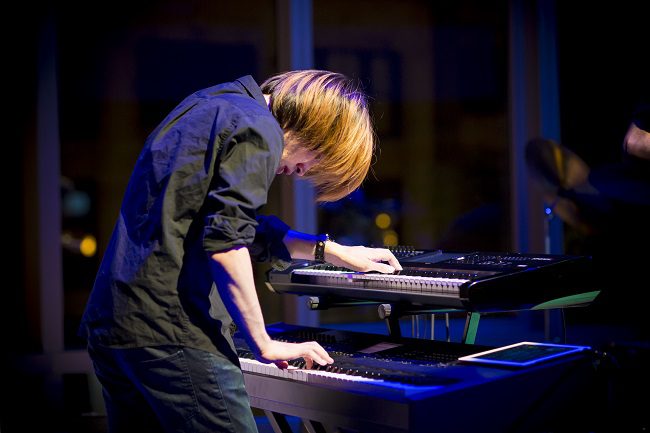 I’m Boston and New York-based Japanese Multi-Keyboard player/Composer/ producer and sound designer. I started keyboard at age 3. From childhood, concerning my father’s work, he has spent summer in Europe and have a global perspective.

My music career began while at attended Osaka University of Art(OUA), Electronic keyboard major in Japan. While I studied keyboard techniques and he was inspired by progressive rock and Jazz-fusion. During his time at OUA, I won the first prize in the various band competitions and I play with famous Japanese bands whose names are ’THE NOVEMBERS, The telephones, The chef cooks me, ORESUKABAND, Tomovsky, Mariko Goto, The Czech No Republic” etc..

I also studied electronic production design major for sound design, mix engineering, audio programming, and post-production works. It was my most of strong point of my music work now. During Berklee, I play with Progressive metal band “Altiom” and “Queens Boudicca Metal Opera Project”. Altom released First Album and credits include Sean Slade who the producer of Radiohead first Album.

I did organize, all compositions, arranging and play keyboard for this Album. My achievement on keyboard skills and compositions were highly evaluated by all of them!

Mr. Aihara’s music is eclectic, complex, energetic yet supremely listenable! The compositions on Multiverse make a great deal of musical sense, while Mr. AIhara’s skill as a bandleader ensured a good balance between imposing necessary musical requirements and leaving room for his bandmates’ creative input. I am sure this album will get Ken Aihara the attention he deserves as a virtuoso keyboardist, composer, and a bandleader. I look forward to playing this music live!” And Guitarist from Snarky puppy and 3times Grammy Winner Bob Lanzetti said about,

“What composer and pianist/keyboardist Ken Aihara has accomplished on his debut record Multiverse, is a perfect marriage of chops and rhythmic and harmonic complexity with tuneful, singable, often pretty songs.

In addition, his use of keyboards and synths is thoughtful and always done to serve the music first.” is creat new music, new keyboard techniques, phrase. Off course I love the 60s to 80s music sounds and I play jazz music a lot. But when I play the traditional style of music, I lot of thinking about how to combine new sounds.

The recent project that I released progressive Fusion Album “Multiverse”. This is my First debut Album and concept was Odd meter fusion music combine to New York contemporary jazz sounds. This Album recording in one day and every song was a live recording.

Multiverse, a work inspired by role-playing games. Throughout this world of various dimensions, infinite energy, and improvisation that can be said to be cosmic are unfolding.

All songs composed by My self And every song have different image these are different verse or dimensions. The first song Ice Mountain come from It depicts a scene that climbs while feeling the weirdness of freezing snow and snowstorm in the snowy mountains.

2nd song Whale is a whale that floats in the ocean of space. Spatio-Temporal wanderer floats between spacetime, Theia impact represents the birth of a planet, and Ridge Black represents an encounter with an unknown organism.

Creat new music and New idea. Also, I have a different style of music backgrounds like Jazz fusion, Electronic, Progressive rock, and Classic music. I could combine or fusion these kinds of music.

I’m going to live shows of my album and I will release my Electronic solo performance project Albums. Off course will be recording and release 2nd Album too.

My parents and friends and recording members of my first album.