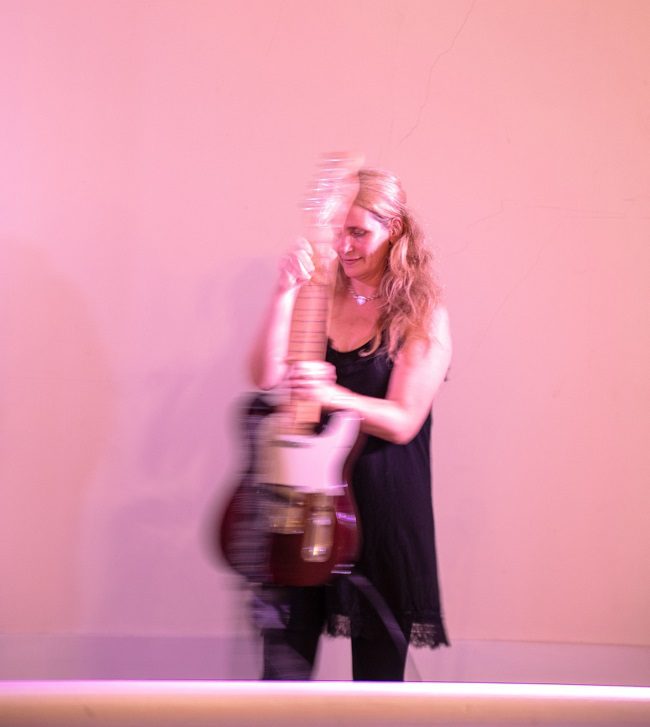 Welcome, Hannah! We are excited to chat with you. Please fill us in on your backstory. We would love to learn more about you and your passion for music.

I live just outside of Paris, France but am originally from Maine. I lived in Chicago for 14 monumental years. During the Chicago years, I went to the School of the Art Institute of Chicago, bought my first electric guitar at a pawn shop (red), formed my first band (Salt Lick), and also my second (Sweet Bridget) and third (Kite Club). I played music the whole time in Chicago’s vibrant music scene. When I moved to France I thought that part of my life might be over.

I had sold most of my equipment, though I did ship over my telecaster, an acoustic-electric Takamine, and two fender amps. In my new landscape, I began writing very different songs, not sure how I would bring them back out into the world. Chicago was a major chapter that clearly has influenced how I approach and value music. I have been so grateful to live in France for many reasons, but I have said over and over through the years, I miss Chicago. The music scene is incomparable. The winters are frigid, and still, all that music finds its way up through the cracks in the ice.

How long have you been playing guitar? Do you play other instruments?

I grew up playing music – violin, clarinet, harpsichord. But I really wanted a guitar the whole time. I bought my first guitar with my first paycheck after graduating from College. I was living in Portland Maine, and on Friday the checks were distributed, I went to Buckdancer’s Choice (I still have picked from that purchase) and picked out a simple acoustic guitar and a Bob Dylan songbook. I brought both homes, sat on my mattress on the floor, plucked through a few songs I knew, and then started writing my own songs. I am always writing songs, and working on them out in my studio. Most of the time, my songwriting process takes time. I don’t whip out songs. And many of them never see the light of day.

I spent some time in San Sebastian Spain, and while I was there I studied classical Spanish guitar. After Spain, I moved to Chicago, where I plugged in, started going to open mics, formed a band, and played our first gigs at Lottie’s and Phyllis’s Musical Inn.

You have a new project out titled “Stingray.” How did you land on that as the name?

Stingray is a great word. It is an elegant and otherworldly fish, hovering and traveling great distances. Stingrays are evocative, scary, and elegant. And they are a Chevrolet! Stingray is the title song of the album. It is a rock song describing a release from the shackles of an unhealthy relationship. It’s not about breaking up. It’s about understanding what was really going on, and no longer having space for the dysfunction in your life. the song comes out of the moment when a narcissist no longer has any hold on you, when the relationship is truly, finally over.

It’s a moment of personal heroism, taking back control over your own well being, and a reminder to go gently with yourself. When dealing with people who are not playing by the same set of rules, you can get into a cycle of trying to heal or fix the relationship based on your own expectations of what it should be. t’s an anthem and a rock song and it is fun to play with the band! It always makes me smile to play it. I had written the first verse very quickly and I knew I was on to something. I had to untangle my part in a narcissistic relationship, which was one of the hardest things I have ever done. It took years. I spent some time researching narcissism and the stages of breaking the hold, and I kept those in mind as the remaining verses unfolded.

We loved every song on the album – do you have a favorite? If so, why?

This group of 8 songs does not have a weak link in my mind. Each song came out of a creative journey, tells a different story, and is fun to play. Several of the songs are really laid back, with a country vibe, several are little surreal, several winks at the audience now and then, and several are full-on rock songs. I think it’s a nice group.

If you had to name one artist that inspires your work the most – who would it be?

I have very eclectic tastes than run through the centuries– classical, modern, new music, folk, pop, rock, experimental and so it’s hard to list just one inspiration! Different things inspire me at different times. It could be the way an artist has held on and evolved their craft through time. Ani DiFranco is one who inspires me for the way she has managed her own career. It could be the way they use lyrics to create intimacy and a narrative that tells a unique story, like Leonard Cohen.

It could be the way they use sparsity to build tension, like Velvet Underground. Or it could be the way they play their instrument with expertise and love, like Bonnie Raitt. I’m listening now to Laurie Anderson, Jill Sobule, Lou Reed, John Prine, and Cowboy Junkies’ latest release “Ghosts”. I just was listening to John Prine and Bonnie Raitt’s “Angel from Montgomery” which is such a deeply emotional song evoking a longing for a life that never was.

This is a really intense emotion of looking back, and still feeling the longing, the passion, that never goes away. I am inspired by this song and have learned it on my guitar. I don’t usually play covers, but it’s good to learn them. Maybe my next song will be inspired by “Angel from Montgomery.”

What do you hope listeners feel or take away after listening to your album?

I hope they have a range of experiences like toe-tapping and humming along to narratives that remind them of things they too feel are important. I hope they remember the record because they remember how it made them feel. A few of these songs are love songs, which is a new genre for me! I hope my songs inspire people to write their own, or at least to live their own.

Tell readers where they can find your music and connect with you on social media!