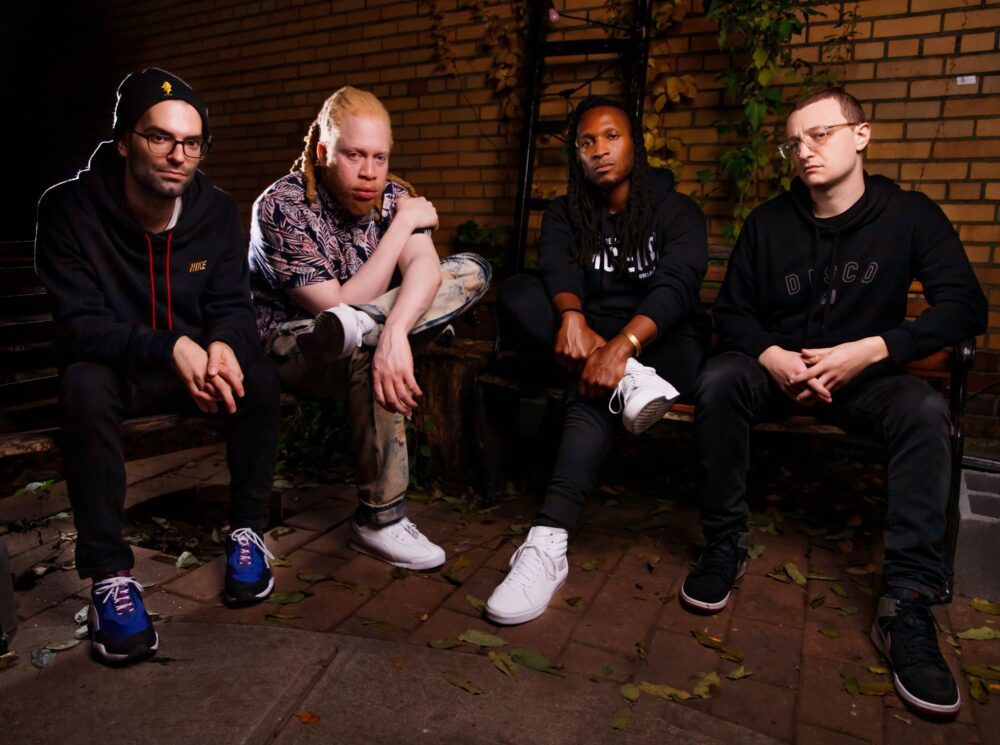 The Nightshades EP follows on the heels of Herbivores’ self-titled debut EP, which dropped during the summer and shimmered with vibrant, breezy savors, whereas Nightshades mirrors darker colors.

Made up of Bel-Ami, Reddaz, Misha Savage, and Will Sacks, Herbivores explain Nightshades’ genesis, sharing, “Wherever there is light there is a shadow. ‘Nightshades’ refers to a group of vegetables including tomatoes, eggplants, potatoes, and peppers, the name came from the ancient belief that these plants grew in the dark of night. The EP is dripping with acidity: dark, volatile, and cagey by nature – it continues the love story that was captured in our first EP but traces it into its climactic downward spiral into grief, anger, and separation.”

Muzique Magazine caught up with Herbivores to find out more about their influences, what they’re listening to right now, and what motivates them to make music.

W: “All I Do” by Stevie Wonder, and I’m not even a singer even a little bit. Though the instrumental for “Weak Bones” came to me in the shower…

R: Most likely a song idea I made up. I’d just have fun free styling and creating.

M: “Weak Bones” I think is the most intense to sing in the shower.

B: From this record, “Boomerang” is definitely the one to get your shower poppin!

R: Too many to pull from. I have a bunch, but it depends on what genre you’re talking about.

B: Geez…there’s never just one! But all around, it’s hard to compete with Stevie.

W: Ever since I went to Brazil in 2019, I can’t stop listening to Tim Maia, Banda Black Rio, basically anything from the Brazilian funk movement in the 70s and 80s.

R: Depends on how I’m feeling, but right now a bunch of world music. So, a lot of Fela Kuti.

R: It all started from dancing and performing at home, so freestyling in school. It was all up from there.

M: I started playing my grandma’s upright piano around age 4. I stepped off when we moved – Pops played guitar since 1967. He gave me my first one. I started playing guitar around 13, must have been 2005. So I’ve been playing for more than half my life. I went to study jazz but inevitably became more interested in producing the craziest stuff I could think of, after being exposed to a heavy dose of Funk in college.

B: Though I never was really focused on a career in music, I’ve always loved singing, so it’s something that came naturally for me. However, in ‘04 I was involved in a serious car accident. After which I decided to pursue music, as that is what is truly fulfilling to me.

What musicians influenced you the most?

Who is in the band and which instrument do they play?

What inspired your new EP, Nightshades?

W: Nightshades refers to the group of plants which people used to believe grew in the dark of night. These foods are said by some to be inflammatory—peppers, tobacco, eggplants, etc.—and it felt right based on the group of songs we had for this project.

R: The season, and the first EP—it was very happy, so we had to show a contrast here.

M: The arc of our 1st EP was the beautiful beginnings and development of a new relationship, whereas this is its downfall. Hey, at least we’re realistic.

B: The “other side” of love. Shit that nobody talks about.

What’s the story behind the band’s name – Herbivores?

W: It was kind of one of those eureka moments. At the time, Bel-ami was a strict gluten-free vegan, and I think he was coming over for a session. It sorta just clicked, you know?

R: The love of the natural vibe, and what’s more natural than Mother Earth?

B: That was my lifestyle at the time.

W: I feel like there are two main motivations for creators to make music: to make the internal external (to make art) or to internalize the external (to make entertainment). For me, I need to make music to process my internal emotions. I hope that what I’ve experienced, from joy to profound regret, can translate into something meaningful for someone else.

M: To escape from this reality and find peace in the realms that are created in the mind’s eye from music’s existence. Or just to dance to my own stuff.

B: I believe all of our stories and experiences are unique. But our purposes are linked. If I fail to do what I’m purposed to do, someone else will be negatively affected.

W: One day at a time. Since March, I’ve been working with NIVA (National Independent Venue Association) to sustain independent venues in the US, and I’ve found solace through that community. It’s amazing to see all of us who work in or at these venues work together to save our stages.

M: We are grateful to be healthy and wishing peace and healing to those who’ve been under extreme stress during this time (especially front line medical workers and essential workers). We’ve managed to get by (in terms of music) via remote and very rare 1 on 1 person sessions. Will and I lived together for the majority of the year, so we were still able to practice and create together.

B: Initially, I was thankful to have the time to appreciate the stillness of it all. But now I’m a bit fatigued, and missing the energy of interaction.

W: We’re already working on our feature-length LP, Photosynthesizers, which we plan to release in 2022. Next year, on top of writing, we’re planning to release a few solo projects to showcase our range as producers and individual artists.

R: More great music to put out to the masses!

B: Continuing to create. And hopefully by the time the world opens back up we’ll have tons of new music!