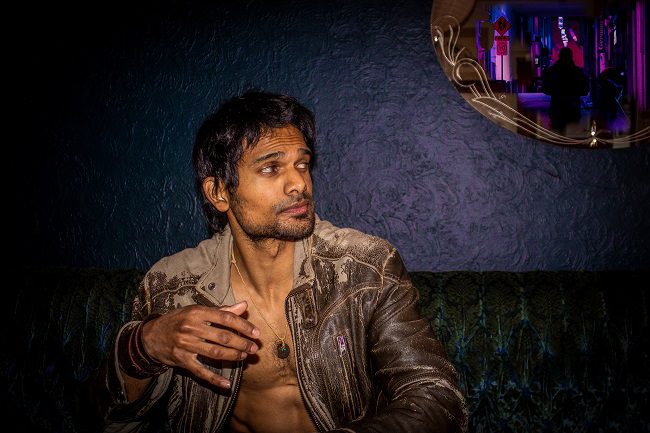 Goldwyn Thandrayen is a Musician and Songwriter best known for his work in 2017 as the Lead Singer, Guitarist of Montreal’s Rock N’ Roll band Psychocide.

He was born and raised on the Island of Mauritius, picked up a guitar at the age of 16 and formed a band right out the gate, covering songs from Led Zeppelin, Iron Maiden, Guns N’ Roses, Sting & The Police, Deep Purple, Helloween and many more.

Although these are quite popular bands, in Mauritius, it wasn’t quite the case. If anything Rock N’ Roll was pretty underground in 2005. In the fall of 2017, Goldwyn gathered the trio once again, with exception of Jared Shonig, who would be replaced by Kenny Grohowski, and write “Avenue B.” “Avenue B” was recorded in Avatar Studios in New York City and Planet Studio in Montreal. The record not only consists of the former setup, piano, upright bass, and drums but it now also consists of Goldwyn Thandrayen’s guitar work.

That’s a very tough question. I guess since high school I wanted to be a musician. But I really only started pursuing it after I graduated from college. I had studied Corporate Law, and started looking up jobs in that field, found out what I required to do and said FUCK THAT!

I believe the root to me even thinking that I could pull a solo project off being just a guitar player at the time was when Slash released his solo project featuring all these different singers and players from different genres.

I took acid one night and remember having these visuals for the record of Avenue B, they were in the Desert location, involving muscle cars driving around. So I started coming up with the concept, called a few friends Tommy DiRocco and Tyler Guest and asked if they would be down to be in it if I made it happen.

They said “Yes. But call me when you’re sober.” That same night I did a few digging up and got in touch with Don Visage from Olena Z Films, we spoke about it and he was in. Fast forward a few months later we were in Vegas shooting “Sad Boy Summer” Episode 6 of the series.

I later got some funding for more and that’s when I Called Zachary Creatchman who co-wrote the script as well to jump on board as a director. We then by sheer luck got Hannah McBride to be in it again, Luna Racy, Cassie Stone and Mark Justice to join the cast. They were off to the races to finish I think 7 or 8 videos in 7 days.

Nobody wanted to get involved in this project from the get-go, because of the limited funds and time, so a lot, like, A LOT of pre-production had to be done beforehand.

I was also writing a new record for Psychocide so It was tough splitting the time and mind (go listen to Psychocide it’s a whole different show) But with the support of Zachary Creatchman and Don Visage it got done.

I’m heading on Tour in a month to promote the album Avenue B in an acoustic setup, some places I will be joined by a Jazz band and some it will just be an intimate Acoustic Set. But I worked pretty hard on both and I think whichever one you catch, you will remember it.

Yeah, the whole Cast and Crew that were involved in Avenue B, Olena Z Films, Christian Cummings for once again helping in producing and mixing the songs, Zachary Creatchman for coming on board after having just come off tough shoot.

Tyler Guest and Tommy DiRocco for if it wasn’t for their YES I would have probably not have continued this line of thought and write out the concept.

And the Social Media links are here:

Take risks, get creative and original.