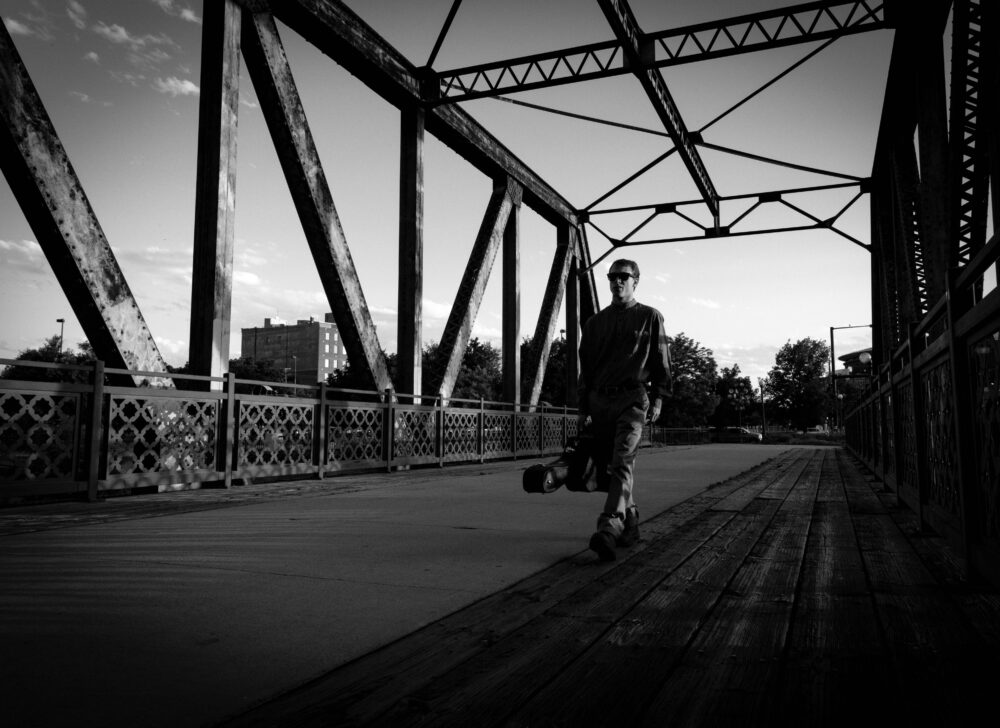 Royce DeZorzi is an American guitarist and producer living in Denver, Colorado. While his past releases have included electric jam band explorations and ambient tape music, DeZorzi now explores the vulnerabilities of solo acoustic guitar with his new album of instrumental compositions.

His album ‘Denver’ is a snapshot of the city he’s called home, weaving threads of his own experience into the tapestry of the plains, mountains, and sunsets that dance across the Front Range.

“The Denver album [is] a project that raises the bar for the beauty and skill of acoustic guitar work and the wonders of freely imaginative composition. DeZorzi commits to the moment entirely, and as such, the listener feels strongly inclined to do the same – to escape into the music, and allow the mind to wander at will.

The title track “Denver” is a huge play within the context of the completed set – its brightness and pace feel like an aptly energetic, appreciative ode to the city that inspired it. Undoubtedly an artist and album worth knowing about.” — Stereo Stickman

“August 2022 – Royce DeZorzi is an artist and songwriter with a very vibrant sound. His style is incredibly diverse, as it explores the depths of acoustic instrumental music, as well as folk, Americana, blues, and more.

Recently, Royce announced a stunning new release titled “Denver”. This album features 16 songs; composed, performed, produced, and engineered by Royce himself. While the sound of the album is incredibly organic and warm, the versatility in Royce’s musicianship is truly impressive.

His compositions are highly expressive, but also emotional and easy to relate to. He is a very accomplished guitarist and arranger who knows what it takes to tell a story through music, even when there are no lyrics involved!” — The Bandcamp Diaries

How did you come by your name?

My full name is Logan Royce DeZorzi Smith. Royce and DeZorzi are both my middle names. DeZorzi is my mother’s maiden name, and Smith is from my father’s adopted parents.

When did you discover your love for your craft and your passion to pursue a career in it?

My older brother Alex was a passionate guitar player, and he passed away when I was 17. We were very close. He always tried to show me things on the guitar, which I never understood. When I was in high school, he played in a band with one of my close friends, also named Alex.

When my brother passed, he left me his acoustic guitar, and deep down I wanted to play but never felt the confidence. So it sat in the closet for about a year, before I tried to sell it to our friend Alex, who showed me how to play instead.

I fell in love with it immediately, and shortly thereafter, I moved to Colorado and started teaching myself how to play while I was working on farms.

Alex and Alex. And Phil Cristino. I studied with Phil when I lived in Grand Junction, Colorado. He’s an angel on this earth, and one of the best players around. When I was 20, I lived there for a summer. I played a few gigs, but mostly practiced 13 hours a day and spent every Monday afternoon at Phil’s house, studying with him. I have so many people to be grateful for, but my mother is more than anyone. Everything I do is in reverence for my mother. She’s my best friend.

I recorded a lot over the summer. Those recordings are like a diary of my experiences during that time, and the concept was just there in the material. I stepped back from it and realized I had an album, knew what experiences I was ruminating on with each tune, and what to call the tunes based on that.

My gift is my curse: obsession. Friends know this about me. I go overboard. When I discovered drum machines, I bought three of them. Going all in is my gift and my curse and I’m particular. I read somewhere that Nikola Tesla couldn’t work if there was a piece of chiffon anywhere in the house. He could just sense it and yuck it had to go. Tesla being one of the brightest luminaries in recent history shows me it’s okay to listen to yourself.

I’m exploring different types of fretless and harmonic series-based guitars, tuning systems built around harmonic structures in nature, and generative environments driven by plants and crystals connected to synthesizers. Mostly for bringing out the rhythms and healing vibrations present in living things.

I’m getting ready for some solo shows this fall. I also started a group called Sun Girl with percussion, upright bass, and electronics, and we’re planning to put an album together next year from recorded live shows.

The solo acoustic stuff is a blast, and going in new directions with that space is irresistible. Modified and homemade instruments, from cassette decks to hurdy-gurdies, are also getting used for textures in ensemble playing.

I think of some Derek Bailey pieces that involved “The Rake”. That thing sounds spooky, and the matrix of harmony implied by those dense textures is fertile ground for free exploration. I love the soup. Setting up environments, to explore the structures and rhythms of life is the closest thing to “writing” music that I do. Sun Girl is kind of a future bass vibe, and I guess the new acoustic-leaning stuff could be called Future Folk.

My mother. My brother Alex. My father. My aunts and uncles and cousins, the DeZorzi family. All the strong and supportive women who have raised me and helped guide me. Martha Ann Henry was like a grandmother to me. My brothers are from other mothers, including Alex Woodson, Ant Ramos, Miguel Garcia, Blane Williamson, Nic Hannan, Neeeze, and many others. A true friend is hard to find.

There are a lot of amazing players today, all bringing different perspectives to the guitar. A few names who come to mind include Lionel Luoeke and Charlie Hunter for the right-hand stuff. They really form a link between the old and the new.

Charlie specifically has this thing for Blind Blake, and the way he translates those centuries-old right-hand techniques into something so funky is a marvel to me. Seven, eight, nine-string guitars, Just Intonation frets (or no frets), flatwound strings, and Blind Blake. We’re eating from the soil tilled by our forebears.

There’s also Jon Catler, Hansford Rowe, and Neil Haverstick bringing attention to different tuning systems outside of 12TET. And too many other names to mention here. There’s an ocean of sauce to explore, and these guys are plumbing the depths. We’re living in a renaissance of music, and the guitar may be the most popular instrument in the world. So who’s the best?

Do your own thing. There’s so much information you can get lost in forever. Step out of the echo chamber!

“Royce DeZorzi’s “Denver” is a conversation, one that is so reassuring with its crystal calm that it is easy to get lost in its very many charms. — Beach Sloth, Be About It Blog”