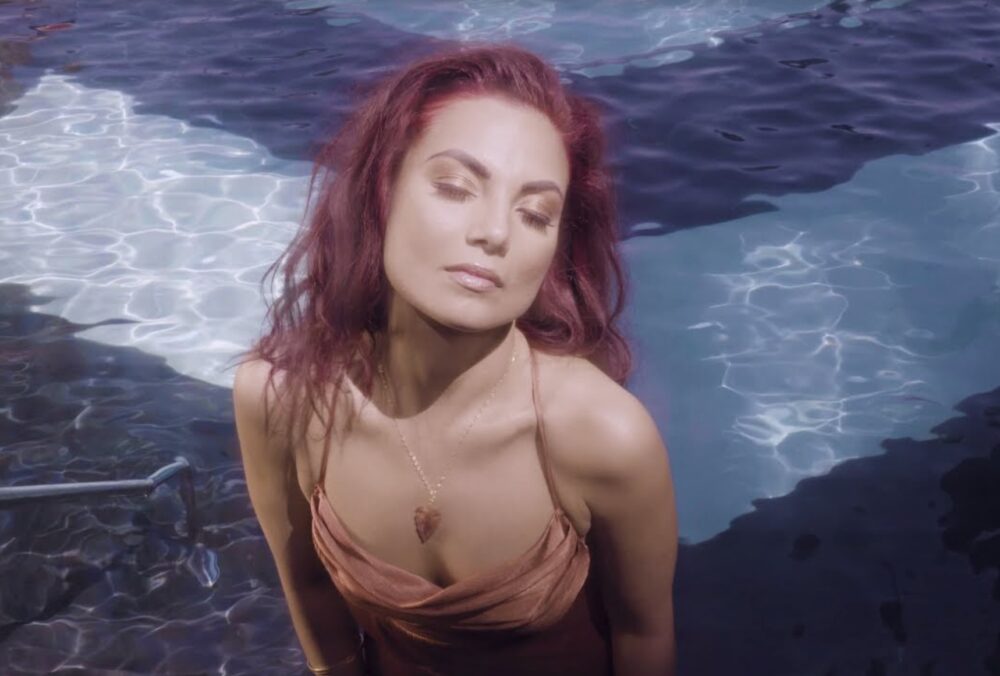 Wow! That’s the one-word consensus from people when they first hear/view the new music video, “Carousel,” from MJ Songstress.

Simultaneously hypnotic and tantalizing, the rhythmic thumping beat of “Carousel” sucks you in with its heady, bewitching pop cadence, while MJ’s celestial, crystalline voice worms its way into your ears. The result is sensuous, infectious, and wickedly captivating.

Originally from Queens, New York, MJ grew up in New Jersey, traveling to studio sessions and rehearsals with her father. When she reached the age of 14, she was the lead vocalist in her father’s (Horacio Jiménez) 10-piece orchestra, performing songs from every genre, including jazz, R&B, pop, soul, funk, Latin, Greek, classical, and bossa nova. Shortly thereafter, she was writing her own songs, as well as studying ballet, jazz, mambo, tap, and modern dance.

A recent participant on NBC’s The Voice Season 6, where she was a Top 20 Finalist on Team Usher, she also made the Finals on Team Alejandro Sanz on TELEVISA’s La Voz Mexico Final Season. She’s worked with mega-stars such as Swizz Beatz, Nile Rodgers and CHIC, Wyclef Jean, and A.B. Quintanilla y Los Kumbia All-Starz, among others.

Muzique Magazine spoke with MJ Songstress to find out more about her songwriting, the inspiration for “Carousel,” and the “feel” of her music.

Music, Family, Coffee in the morning and 1 more for fun, my phone.

I have no process. It starts with a vibe and when something hits, it’s a GO! Song ideas for me happen at the most spontaneous and random moments. After creating a vibe with my producer Tyrice “TyJamz” Jones, the songwriting came out so effortlessly. I was just singing out loud and what came to mind and heart. I wanted the song to feel fun. It really wasn’t an overthought-out process. It just flowed.

What inspired or motivated your new single/music video “Carousel?”

I listen to a plethora of music. I was vibing with my producer, Tyrice Jones, and played him some of my favorite Sergio Mendes songs.  One of the songs grabbed his attention, so we looked up a live performance on YouTube, and “Carousel” started to form. The sample we used had such a cool vibe. To me, it sounded like the sample was saying “Carousel.” So from that word I just built around the song idea.

I would love people to get up, have fun, let it all out and dance to Carousel. I want people to feel my music and feel good about themselves as well. It’s been a tough time in history. Through music is how we get to heal and Power Through life. I would be so honored and humbled to have people continue to follow me and support my music. That for me is the ultimate as an artist.

What is your definition of tone? Has your tone changed over time?

Tone can be used in several contexts. In a vocal context, for me, tone is a vocalist’s unique individual sound that is crafted and formulated by dynamics, sound, color, and the timbre of their voice. A true committed seasoned vocalist utilizes their tone and voice as an instrument, crafting each note and melody to create an experience for the listener. The BEST example of a vocalist who tells a story and makes you feel every note and word is the great Whitney Houston. She is forever my professor. My tone through the years has definitely strengthened and expanded with experiences in the studio and on tour. The music industry has been my college.

How much time do you have? Lol! My story can literally be a movie. The super, super, short, and sweet version is that I grew up in a musical home. My parents created a 10-piece band named “Somethin’ Special” and that was their way to make money. My mother was the lead singer, and my father led the band with the bass. He’s also a multi-instrumentalist. The story is that my parents were young, and they hustled every day to make ends meet all while raising a newborn baby. My parents couldn’t afford a babysitter so my dad would take me to his rehearsals and gigs. I was known as the baby that never cried or made a single peep. I was soothed and attracted to the music around me. It had my full attention. I would mimic every sound that I heard. My father played for me an old recording of me humming my first notes in key. My father knew I was gifted with the ear and the sound.

Everybody. From known to underground. R&B to Jazz. USA to overseas. I’ll pick a song or genre on Spotify and I just let the music play. I come across so many new artists and music.

No. Anything I listen to or watch, I have found the magic within the music or movie. There is nothing that I would be ashamed of or embarrassed by. If someone else experiences the opposite then they just don’t hear and see what I see. For me when I lock into music, I see colors. I have my own experience that others sometimes can’t quite relate to.

Music is my WHY. It’s my Purpose, my passion, and my 1st true love! For me the “Why” is irrelevant. What matters to me is the What and How. What am I going to sing and write about next? What is the next subject I should create a song around? What is my message to people? And How do I want to feel and make others feel?

One breath, moment, and day at a time. Staying grounded with myself and connected with my family and close friends. Practicing self-care and gratitude. Allowing creativity to takeover. Choosing joy and abundance. Having faith. Being Love!