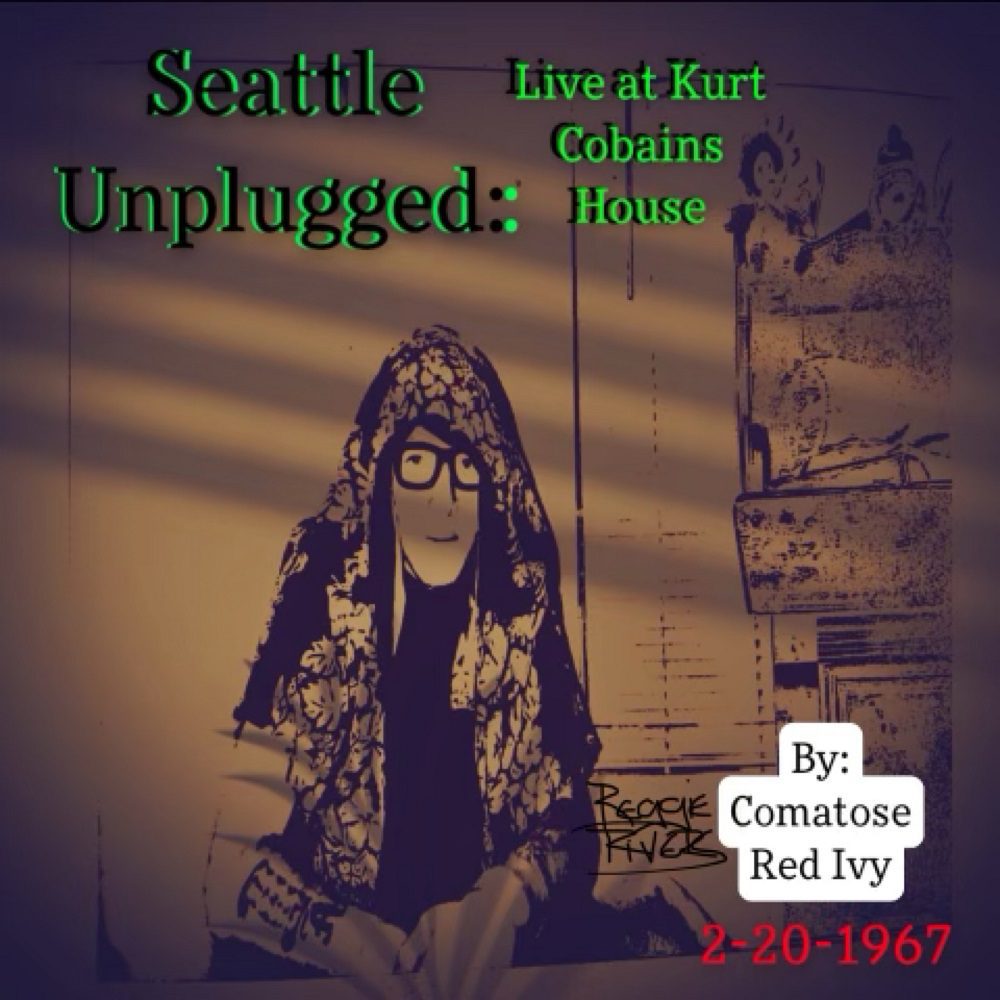 Comatose is the Ghost He taught me how to sing and rap when I woke up from dying he is an energy entity so technically not a ghost I just say ghost so humans can understand.

Red is the color of the world that I went to also the color I was when I woke up in the dream I was the red light I was the power I was the energy and when I came back to earth I was still red I am still Red.

Ivy rhymes with psyche and a whole slew of other words the two-syllable word it’s easy to get off In syllable rhymes near rhymes and rhymes any type of rhyme all the time anytime Ivy be crazy just like I just did ya see.

I woke up and was an expert from the first time I hit record to today. 1 st try every try never even tried except on this Seattle Unplugged Album. Wanted to be perfect since Kurt Cobain wrote it through my heart and he sings stronger than me, but he guided my heart as I sang too so I kind of cheated.

Racist Phussy crackers, they made me realize being a worthless oppressed phussy makes no sense So I’ll do what I want in life and they can just pay me to hate themselves while listening to my music.

Seattle Unplugged: Live at Kurt Cobains is a syllable mostly matched tribute album for Nirvana, it’s theirs Kurt wrote it through my heart in the mountains mostly as we sat in the rain crying or laughing overviewing Washington State. He mentored my vocals, we realized quickly I’m a tranny bitch and that raspy voice wasn’t happening so we practiced a few sounds and found something that worked, we called it deep pain.

Track for track the tracks match Unplugged New York syllable for syllable in name and themed to its original song but 100% different too, haha Gefffin! I made Unplugged again and you can’t sue me ? Well actually Kurt contacted me about the album just a week before I left Ohio. I was surprised he chose me, but he said I was the only half-dead bitch he could find to talk to. Cool cool, I’m in!

This and I put Courtney Love life on it, the most barred up album on earth, OVERALL RAP AND EVERYTHING. Have someone try to pick it apart, it’s more barred up than Swimming. THIS ALBUM HAS THE HIGHEST BAR COUNT ON EARTH!

Usually, first, try every try because my heart does it by itself. Work ethic is, smoke meth try to talk me into my suicide (inevitable) then cry because I’m alive and record.

Well, no phaggot rapper can get at me. I’m the best writer on earth, the most powerful wordsmith, wordplay bitch ever, and no one not dead or alive dare get on that mic against me. So much so best wordsmith I have Mac Miller’s suicide note he left us. I leaked what the cover meant but will never leak a suicide note, it’s mine. It’s attached for those interested to see the truth of the cover, factual factual proof 100% from Mac Miller himself.

Honestly, trying to get off earth and go on with my life. Suicide if I’d ever stop being a coward, praying this gang war I’m in goes bad for me. I legally purchased a gang’s name and branded it and copyrighted it out from under them because the 500 of them and 25 years they had they never figured it out.

So I did other gangs too, I legally own about 10 gangs now. Hahahaha. I bought 3 armored hummers I’m driving through their businesses on July 4th then imma hop outshoot up and drive back to Cali let the FBI clean up then I’ll roll back and open my CWB STUDIOS.

So get this, a transgender owns Cincinnati White Boys gang, hahaha. That’s why I took diss album down, it’s mine now. Might put it back up, it got played a lot. Hahaha, It replicates them playing themselves when I roll through. I f*cked up that whole gang, 1 Bytch. Hahaha

Imotape Productions, my brother on the cover Reggie Rivers, great artist. My immediate family for giving me something to sing about and all the pain and hurt from men ya. Know nasty ex ducks that made me just as broken as Kurt Cobain, always wanted to be dead and a rockstar, MOM I MADE IT! Peace ❤️

Turn off your TV F*ck west coast sound create your own. Stay independent but don’t pass up the possibility to enhance everyone’s life around you if it arises. Don’t practice sounding like something or someone and never second guess yourself or your music. If it’s from heart, you nailed it ❤️