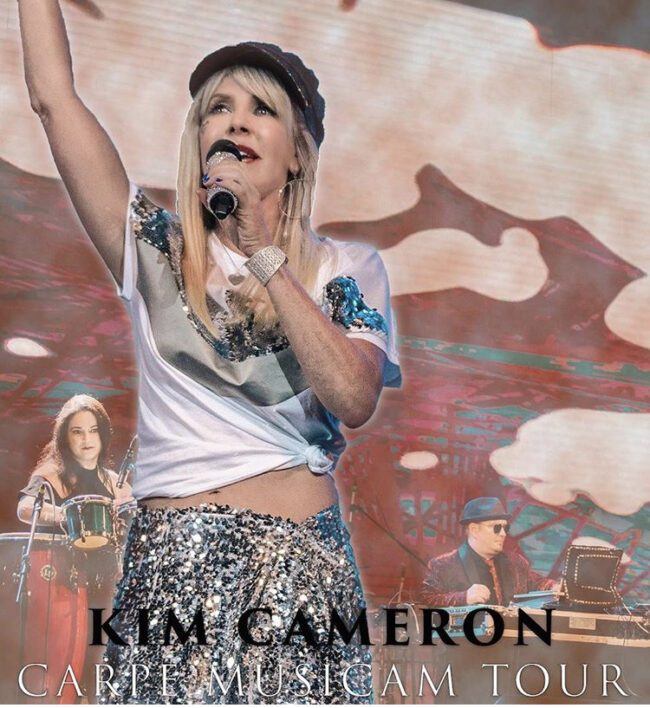 TOP Dance EDM charting artist Kim Cameron has come to Amazon Prime… The Amazon Prime movie is about the Carpe Musicam tour to Xiamen, China!  It took place last summer and includes footage from before the soundcheck, the full concert and the after-party.

This exclusive behind the scenes look is narrated by Kim herself, this short film runs 45 minutes so fans new and old can see everything that goes in and on with a concert!

Originally from the Los Angeles area, Kim Cameron moved to a number of states in the US with her family before settling in Nebraska where she earned her college degree in broadcast journalism.

Growing up, she had played the clarinet in her school orchestra and marching band as a child and eventually landed musical theatre roles and sang in choirs in her young adult years. After college, she worked as a radio personality in Lincoln, NE and later worked for information technology companies in their media departments.

While continuing to work in the corporate world, she moved to Miami Beach where she began her musical path by joining a local cover band in the early 90s. For more info check out  http://sidefxband.net/about.aspx

Check out Her Latest Song

A lyrical song of contradictions with a musical electronic style to match.  Using a funk beat mixed with live Latin percussion, female vocals float on top with crazy high harmonies, a big pre-chorus, and hook.

The love story speaks of removing all barriers to find each other in the highest, deepest love. Perfect rhythms for high energy dance floors. Live conga’s give this track a Latin dance feel.

The video was shot in Las Vegas with aerial views of the Strip, High Roller and street scenes of the city that never sleeps, playing off the song’s theme “climbing down into you.”

Algiers- There Is No Year Review

Since their debut in 2015, Algiers has made a name for itself as a first-rate experimental act and one with a searing, timely political conviction to boot. Characterized as “dystopian soul” and deriving from punk, gospel, hip-hop, and elements of Gothic literature and sociology, Algiers serves as a captivatingly deep and world-weary act, warning of oblivion and teetering on its edge; they best could be described as Frantz Fanon’s The Wretched Of The Earth put to score.

Algiers’ latest release There Is No Year is indeed inspired largely from print and prose; from the 2011 book of the same name by Blake Butler and “Misophonia”, a poem penned by vocalist Franklin James Fisher. One such description of Butler’s book states that it “…offers a fractured, dystopian parable about the struggle and survival of art, identity, and family.” Supremely fitting for a band like Algiers, it is an ideological premise that suffices to build anticipation for a record exploring said themes alone without as much in the way of music has to be released in advance.

“There Is No Year” immediately starts off pulsing, urgent and paranoid, much akin to a racing heartbeat under the threat of impending doom around the corner. Indeed, that is much of the vibe Franklin James Fisher conveys in his opening sermon: “Now it’s two minutes to midnight, and they’re building houses of cards/It will spiral out until the day we all fall.”His last-days gospel gets more direct in “Dispossession”, building dramatically on much of the fear and pessimism established in the opener: “Run around, run away from your America while it burns in the streets/I’ve been here standing on top of the mountain shouting down what I see.”

“Hour Of The Furnaces” grows upward from the foundation set out thus far, incorporating more elements of noise alongside the obligatory foreboding piano and raging, fuzzed guitar chords on the choruses. “Losing Is Ours” strips things back a bit, starting with a heavy, minimal beat before adding in the somber ivories and haunting melodies: “Let the sirens sing out their nightmare/They’ll be too in denial to know/Let the bow break and all the cards fall over/they’ll be too in denial to know.”“Unoccupied” is substantially more uptick and feels far more powerful than powerless, driving forward in all its gargantuan glory and playing around with distortion to great, well-placed effect.

“Chaka” starts off like the theme to a 1980s action movie before breaking into the pulpit tone characteristic of much of the album, this time sounding like The Weeknd if he had dropped a Christian record and taken an austere approach to it beyond simply he is my savior. The groove-ability is deliberately set off by discomfort, first by the lyrics and then by a distorted, dissonant saxophone solo ensuring that nobody listening does so passively.

“Wait For The Sound” waxes apocalyptic once more, set against a frightening backdrop with a percussion line that resembles gunshots and explosions: “Streets are raining fire/we’ll be gone now any day.” “Repeating Night” demonstrates a bit more melodic texture while mixing a bit of noise in for good measure, reiterating in its chorus a sentiment that has become all too common in recent political discourse: “Don’t forget it’s us against them.”

“We Can’t Be Found” continues to channel immense amounts of tension and anxiety, doing so in an invasive and vivid, ever-descriptive fashion: “Something else inside this house is listening/Someone else don’t say its name out loud/It’s crawling up your conscience/reaching out, it screams without a sound.” “Nothing Bloomed” starts out beyond ominous and certainly blossoms (or withers) in that direction, with Fisher coincidentally declaring “We don’t have to tear away what is distant/Everything starts to fade under the weight of silence” as the song builds to an immense boiling point.

“Void” starts out as pure, rumbling noise, and is a rather uncharacteristic end for the album given the rapid, punkish blitzkrieg it turns into in comparison to the dreary plod of much of the other tracks on No Year. On the other hand, it’s the sonic manifestation of utter chaos, confusion, and collapse; a logical conclusion to the gradual sense of dread built up throughout the record. Sometimes it all comes down to perspective.

With This Is No Year, Algiers prove themselves to be a highly provocative act: Provocative not only in the sense of the stances they take but in the corresponding approach they take to creating the track that coalesces around the riveting, fiery message they deliver.

Furthermore, they are provocative to the mind; one more intellectually and artistically inclined as much of their listenership probably is will feel compelled to read up on the texts, films, concepts and whatever else inspires them to enter into the psyche of the band and, perhaps, find their own incendiary muse. It’ll be interesting to see what kind of material they cook up next, and what the inspiration will be for it that time around.