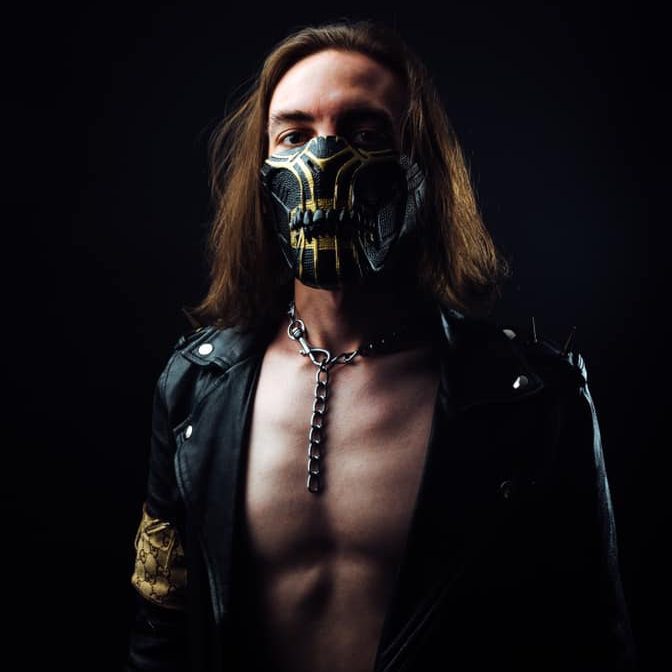 While much is known about Alex Sampler, an aura of mystery surrounds Earl the Kid, whose identity remains concealed in the shadows. He’s never been photographed sans his mask, usually adorned by skull images or demonic visages.

Frequently described as a hybrid of trap and dubstep, Earl the Kid’s sound brings together influences of death metal, new wave, and Goth fused with hefty trap and dubstep. Only 17-years of age when he began producing, after spinning at house parties and clubs, he later moved to London, where he discovered inspiration in the dazzling fashion and music scene of the West End.

In 2015, he dropped his first single on Soundcloud, followed by an album, RVR, in 2017. His 2018 remix of Lil Pump’s “Gucci Gang” collected vast attention, putting him on the map. A year later, he released Origins, followed by an EP, Donut Invasion, and a single, “Deathwish.”

Self-proclaimed “The Donut King” because of his fondness for donuts, he’s a voracious reader and ardent skateboard junkie. And oh yeah, he has a wicked sense of humor.

Originally from Italy, Alex Sampler, aka Alessio Pellegrini, initially performed under a variety of names, including Revolution DJ, Roovy, and Sky N Stars. While growing up in Italy, he fell sway to dance and rap music, later becoming a radio DJ.

In 2015, he launched the Trap Nation playlist on Spotify, later changed to Trap and Bass, followed by a shift in his sound from dance music to trap and future bass, resulting in an intense notice from major labels.

In 2019 he dropped “Atmosphere” and “Still Lonely” with Kaput Blue, followed by “WTF” and “Get Some Cash,” featuring Lina Simons. 2020 saw him release “There Will Be Blood” and “I Miss You.”

The surging, reckless dynamic punch of “World Trapped” hits like a punch to the diaphragm. Because of the song’s oomph and assorted hypertrophic sonic layers, Muzique Magazine caught up with Earl the Kid and Alex Sampler to probe into how they got together, which artists they’re listening to right now, and to explore the possibility of intervention for Earl the Kid’s addiction to donuts.

What three things can you not live without?

A: Music, ears, friends … Joke aside, music is a form of expression and it would be awesome to share it or even inspire someone else.

A: I started in 2011 with a different alias, my career has been accompanied by the presence of various personalities from the world of club experience that allowed me to become a successful producer and DJ. In 2012, I was only 19 and I was a radio announcer and presenter on some Italian FM stations; some of my records had huge support from David Guetta, Fedde Le Grand, and Provenzano DJ.

In 2015, with the booming of trap music in the US I was one of the first playlist curators in Europe to launch a Spotify Playlist. This opened a change of genre for me from dance music to trap and future bass. Also, I attracted the attention of important labels such as Spinnin’ Records, Ultra Music, Sony, Universal, Mad Decent, and STMPD.

E: I started my musical journey at age 17, drawing inspiration from goth/metal/new wave music and mixing it up with trap and dubstep. After many years working in the music industry and promoting events, I moved to London to pursue music full time. In the UK, I found the inspiration I needed. Inspired by the surrounding West End’s vibrant fashion and musical community, I discovered the true essence of the ETK project.

A: The idea was to mix the cinematic with some heavy trap style.

E: The idea was to mix heavy trap style with some cinematic.

What is your songwriting/collaborative process?

A: I will always start from the idea I have in mind; it could be a drop or even just a vocal. I like to spend a lot of time on my work until the result is the way I want it.

E: It kinda depends on my mood. Sometimes I start with the drumline or bass sound design and vice versa. One day, I called Alex about doing a collab and the next thing we know, we are making people bang their heads, once again, haha.

What do you want people to take away with them when they listen to your music?

A:  With the ongoing pandemic, I just hope they find whatever they are looking for. I have had a lot of people tell me that my music has motivated them or got them through hard times.

How did you two begin working together?

A: We met at the Amsterdam Dance Event in 2019, one of the biggest music conferences in Europe. We were in the same Hotel and spent nearly five days networking around. We put together a track in my hotel room and were very excited about it!

E: We started to chat a couple of years ago via social media, but we actually met in person for the first time in Dam for ADE 2019. You cannot put two producers like us in the same hotel room; we’re going to come up with something (OF COURSE); it is like throwing petrol onto a bonfire.

E: Oh, I am getting a bit nostalgic here, though: Depeche Mode, Sisters of Mercy, Lamb of God, Cradle of Filth, the list is endless.

A: I have a huge list now, but if you open my Spotify today you will find Moza Kaliza, Cadmium, grandson, WE ARE FURY, QUIX, Azide.

A: I am not sure how entertaining it is, but I am certainly guilty of spending too much time on a single snare.

E: Obviously, everyone does, whoever says the opposite is a liar and he orders diet coke with his fast food (probably listening to some b-tech RnB). I have loads of guilty pleasures such as eating my donuts in the helicopter (thanks Castle Air, haha), belting out Hall & Oates in the shower, and so on, haha.

A: Because it is easier to say “fuck my life, I’m miserable” through a chord progression than actually saying it to someone’s face. Honestly? I enjoy it. When I come up with something I like or something that sounds cool, I loop it nonstop and have the biggest smile on my face. I make music because it was a habit instilled in me from a young age. My father was a DJ back in the ‘80s and ‘90s. I’m the only one who didn’t quit (even if I had some hard moments where I was losing my faith in what I was doing).

E: Technically, I make music as a hobby because my main job is to be the Donut King. Isn’t that enough?

Looking to the future, what is next for the two of you?

A: I don’t want to be the spoiler, but we are working together on another follow-up.