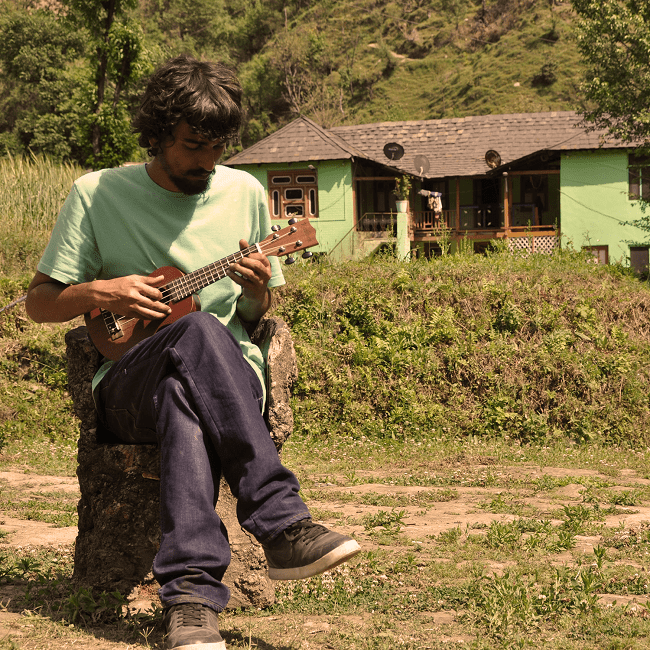 Hmm, initially I did have a small ping pong session regarding the alias/moniker but in the end, nothing made sense. These are the sounds that are coming out of me, might as well just keep it simple and go with the name – angad berar.

Ah man, I have been wanting to write and compose music since the day I picked up the guitar which was way back in primary school. For some reason, I never had enough means to create an environment where I could make meaningful sounds. My initial plan was to go to Berkley and take this up “professionally”. But ‘cause our family traveled quite a bit I wasn’t able to complete my 7 music grades which are a minimum for the university. I am glad that it didn’t happen… Haha

While we were in high school, my sister Amrit and I used to jam quite a bit as a duo. I think it was mostly Hendrix and White Stripes. She plays the drums. That’s when I started composing riffs and melodies to help us move out of our usual cover-based jam sessions. I guess this was the first time when I actually got a taste of what it feels like seeing one’s ideas come to life and experience them from a third-person point of view. We still need to make an album but she is so busyyyyyyyyyy hahaha (shout out to mottuuuuu)

I have tried to keep the overall vibe of the sound positive and explorative. For Elephants, I wanted the sound to be clean yet full and spacey, something similar to Mark Speer’s or Hendrix’s Little Wing/Wind Cries Mary sound.

Songs like Hazy Light, Diving, Anjuna, Between Dione and Mimas (BDAM) and Dreamstate have this kind of vibe to them – straight up Drive Pedal (gain turned to a minimum), Echo Pedal and a Delay pedal to spread its wings a little bit more.

However, ’BDAM’ sounds a little different from the rest cause the guitars have been reversed entirely in the song, which adds a beautiful longevity to the notes.

Astroknaut and Moonlovin’ have this added element created by the Whammy pedal. I love its sound, love how Hendrix and Jack White used it. It adds this twinkling sparkle in the song while pushing its sonic limit beyond what’s possible, but I have to use this carefully cause I have a tendency of overdoing the sound with that pedal. Hahaha.

Svara has been given a different treatment. Svara is low-end heavy because the vibe of the song demanded it to be such.

Elephants’ overall sound is inspired by 60s-70s psychedelic rock sounds, as well as the Drone, sounds created by Hindustani classical musicians such as Zia Mohiuddin Dagar and Ustad Asad Ali Khan. Songs like Svara and Dreamstate have a direct Hindustani Classical influence.

Tone-wise, I haven’t yet locked into a sound that I can call my own. I love the idea of layering sound, like creating a bed of lush green grass for the other elements to walk on.

Psychedelic rock has had a huge influence on my playing. I started by listening to early Floyd, Hendrix and then got introduced to bands like ‘My Brother The Wind’ and Causa Sui. Songs like ‘If 6 Was 9’, ‘Third Stone’ and ‘Careful with Axe..’ have opened up quite a few windows for me.

I love the use of narration in early Floyd’s work. Later, while I was in Kerala I started listening to Hindustani music, whose influence grew quite a bit on my playing. Songs like Astroknaut have a little influence of Krautrock but only in its essence.

There are 3 songs on the album which have glimpses of Hindustani music – Svara, Dreamstate, and Anjuna. Svara was completely inspired by the drone-like sounds of a ‘Dhrupad Veena’. Dreamstate has this ‘linearity’ in its composition which was again inspired by the compositional structures of Hindustani music. I do look forward to exploring this further and enhancing my limited know-how of this beautiful art.

Elephants on the Beach is reminiscent of the experimental-explorative days spent in the years of 2011-15. These days, whilst being fun and colorful, were in essence quite revealing – me to myself and the beauty of life around me.

Elephants on the Beach is not about the elephants but more of an ode to what ‘reality’ is. The scary, as well as the beautiful part of it, is that each one of us has a different perception of reality in general. We make decisions and take actions in our lives based on how we ‘see’ it.

Everyone has their own elephants walking around, keeping them company – Perceptions of Love, Dreams, Beliefs, ideals, Symbols, Animosity,  etc… However, at the end of the day, it is all of our collected perceptions stirred together, which creates this beautiful funk called life.

So, to answer your question – I have tried to capture the above experience(s) in essence through all the 8 songs, where the protagonist either reaches a realization – Diving or Hazy light, falls into a state of a awe or a dream – Dreamstate or in fact, experiences an internal emotional journey, like AstroKnaut or Svara.

That’s a good question, recording from home and working on a low budget definitely had its own share of challenges. Apart from making compromises on the equipment and methods of recording the biggest challenge for me was working in isolation.

Things can become quite subjective, and it becomes hard to put a finger on when something is enough or right. It is so important to have a compass when driving with such sounds because it is so easy for one to get lost. For example – In the middle of AstroKnaut, the protagonist enters a space that is unknown/foreign to him.

I approached the composition with this idea, which more or less is quite objective, but what became difficult were the elements that make this experience tangible for the listener – it was these moments where things got difficult to work with.. i.e. how much is enough and how far is far enough.

In the end, the only thing that helped me come out of this quicksand was the absolute surrender to the music – if she decides to stop flowing, I stop.

Besides this, there was the challenge of time management because I work as a designer for my day job. So, managing time and focus between my day job and elephants without jeopardizing any one of them was a process I had to reiterate quite often. Wouldn’t say I have found the sweet spot.

hmm, my greatest attribute would probably be persistence. There were so many moments where I felt like quitting or prematurely publishing the work but a part of me kept at it till the end cause otherwise, the work didn’t feel right.

Ah, no man. The trees and the waves have figured it out, you know.

I am working on some new sounds and approaches for an album which should come out next year. We might get to see an EP sometime around the year-end, let’s see…

Besides this, I have been lucky to be part of projects where my job was to design the sound as part of the experience. One of such projects is an interactive art project called ‘Gentle Monsters’, which is in collaboration with Bangalore based artist, Nisshtha Khattar.

You can check out the details of the project here – https://www.gentlemonsters.org/ and https://angadberar.bandcamp.com/album/sounds-for-gentle-monsters

Yeah man, so many…

Ashrey Goel for helping me mix, master and literally realize the project. youeffo for enabling me to expand my sonic walls. cheffaker for her immeasurable love and support. She is responsible for clicking the Album Art picture. Khattu, Praku : ), Nabiha and the people of the mountains, the deep-diving family, Bachan Saab, coffee. tonic, the Rare B’s, Jungle Man, Momo & shelly for their vibes and smiles : ) Without them, there wouldn’t be any footprints left.

You can find the elephants on the following extensions…

Well, I feel the most important thing for any artist is to completely surrender to their work and its creation process, come drought or rain. Anything is possible if one puts in enough time and energy to something, just look at the universe…haha.

With the advent of digital tools, open-source forums and www anything can be created from a piece of hardware~software. It’s an exciting time for home recording artists, cause now we have the freedom to make our ideas tangible in the comfort of our own spaces without shelling out a large number of greens.

So the suggestions would be (from my limited experience)

– Know your sound and the essence of your project

– Surrender to the ‘feel’ of the song.

– Get a solid mix, especially from a spacial sense. (if you can’t do it, work with someone who can)

– Focus on Transitions, Automation and the silences

– Lastly, at the tail end of the project conduct listening sessions (this will help you look at your work from a further distance which will give a fresh take on how your work is flowing as a whole)