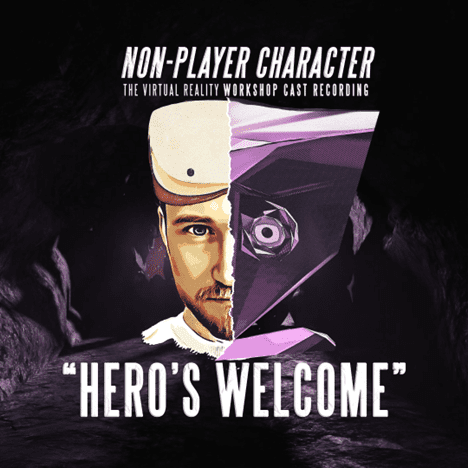 Imagine if a Disney musical came to life and interacted with the audiences in what Fame Magazine calls “a dream-pop immersive experience between VR and live theater… a flawless blend of Broadway, games, pop, and comedy bliss.”

The Non-Player Character soundtrack, written and performed by Brendan Bradley was arranged and produced by Maurice Soque Jr. from the live, virtual reality stage show by Bradley about a non-player character in a video game who witnesses the death of the Hero and turns to the audience to navigate the five stages of grief (represented as five virtual worlds).

Info Music invited readers to “Immerse yourself in a virtual world with Brendan Bradley” in what Roadie Music Magazine called, “A delightful and fascinating piece of live musical theater in web-based virtual reality that anyone can watch in their browser, even without a VR headset.”

This writer was emailed a link that let me enter from my computer and move around with my mouse and arrow keys and talk using my microphone. Other audience members attended on computers, VR headsets, and even mobile phones. Still can’t picture it? Neither could I so here’s a link to ENTER Bradley’s example theater for yourself:

The show opener, ‘Hero’s Welcome’ drops this Friday and sounds straight out of a Disney animated movie as a fictional video game Hero introduces us to the quirky experience with lyrics instructing the audience how to use the virtual reality controllers while parodying famous musical theater and video game melodies.

Excess Magazine writes, “It’s not surprising that Reprogram Me entered the top 25 on the iTunes charts” after the first single from the Non-Player Character Soundtrack charted during its opening weekend. The second single, ‘Hero’s Welcome’ hopes to find similar delight amongst listeners at the intersection of Broadway and video games.

In a solo, hybrid performance Sistra calls “the first of its kind,” “Bradley plays various characters inside a fictional video game, pioneering a new kind of musical style that could be the future of entertainment,” reports Daily Music Roll, “incorporating danceable beats and catchy electro-pop soundscapes…with an auto-tuned tremolo offering the virtual soul of Bradley’s characters in the vein of Owl City, Bo Burnham, and Wall-E.

In the story, the NPC character witnesses the death of the Hero and asks the audience to “reprogram me” so they don’t have to navigate their grief alone.

Bradley sings while literally gathering the audience in the palm of his hand and lifting us into the game world using mechanics that could only happen in virtual reality thanks to the design by Bradley, technical director Michael Morran, and user experience designer Jason Wang.

I can honestly say a performer has never scooped me up and sung to me before and it’s easy to see why Non-Player Character won Best Interactive Virtual Reality Experience at Queensland XR Festival earlier this year.

KIMU elaborates “Fans of Disney and other Musicals will definitely connect with ‘Reprogram Me,’ although it is clear that Brendan Bradley is creating a universe of his own.

In the story, Bradley fully improvises with four audience participants in virtual reality headsets and the seated spectator audience watching on the big screen with only the safety net of his songs to regain control of the show to elegantly transition the audience between acts of this co-created catharsis.

In the vein of new Broadway musicals like Be More Chill, Waitress, and Hadestown, Bradley is using social media (and now) social virtual reality to workshop his concept musical *with* the audience by performing new numbers and interactions at virtual festivals and conferences around the world with a full album of Non-play character (Workshop Cast Recording) on pre-sale for a September release.

Non-play character first prototype performance was December 2021 at The Mugar Omni Theater in Boston where Bradley performed live in virtual reality in front of the theater seats with 4 audience participants while seated spectators watched the virtual reality characters and worlds projected live on the IMAX dome screen.

As hybrid and virtual events are here to stay, Non-player character invites Broadway audiences into the 21st century of interactive technology with a heartfelt message that everyone has a story to tell and a role to play.