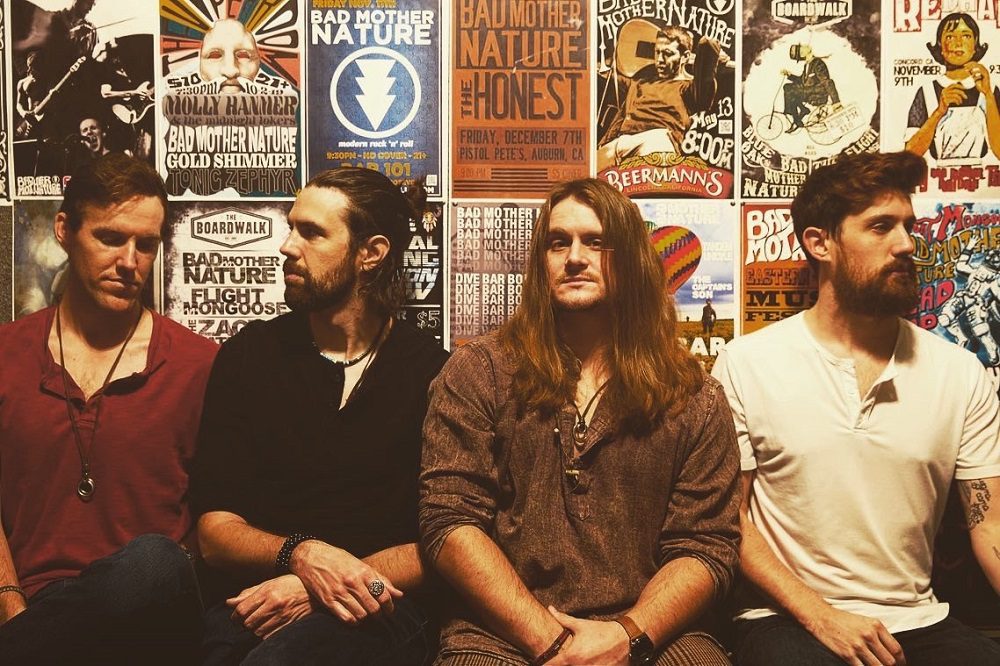 The song is a unique take on the 70’s rock vibes that Bad Mother Nature has constantly blessed us with over the past year, this being their 6th single released in 2020. The band is gearing up to release their second full-length album, ‘Heavysong’, in early 2021.

What is the story behind the band’s name Bad Mother Nature?

Axel came up with the name. He had it leftover from an early line of lyrics he had written and thought it would be a cool band name. When we actually formed the band and we’re looking for a name we sort of crowd-tested Bad Mother Nature along with some other ones and people seemed to like it so it stuck.

You have a sound that harkens back to the 70’s era of rock, what many might call the greatest period of rock n’ roll, and you’ve been compared to bands like Deep Purple and Pink Floyd. What is it about that sound and that vibe that you as a band are attracted to?

To be compared to those bands is hugely flattering. The classic rock music from the 70s and late 60’s was music that we listened to growing up, simply because our parents listened to it. There was a level of musicianship out of the 70’s that was hard not to admire.

They were getting influences not only from early blues but also straight out of the books of classical composers. Bands like Zeppelin and Queen were doing all kinds of bizarre things that exploded into the mainstream, and their songwriting is still timeless.

A lot of those old rock bands were just really iconic, and the fact that we still listen to their music 40-50 years later is a testament to their strengths. And what’s cooler than a f***ing guitar solo?

If you could go on tour with any band or artist, who would it be and why?

In terms of modern acts, there are few awesome rockers we’ve been really digging that we would love to tour with. Kaleo is a pretty big group we’ve been jamming to, same with Greta Van Fleet. There’s a band called Dirty Honey that is getting big, which we actually almost opened for once in Sacramento.

Sturgill Simpson has more of a country edge but he’s amazing and has a slew of influences in his music. We also really dig Rival Sons, The Record Company, and Vista Kicks – who is another great band out of Roseville doing big things.

What’s your band’s philosophy behind the music you make, and what continues to inspire you as a band?

Our band is pretty democratic in terms of coming up with music and lyrics, making decisions about the band, even little things down to what should be in our social media bios. Working together in that way makes it easier because if even one of us doesn’t like something we don’t do it.

Musically our philosophy is really no different, we work on music together, sometimes Ryan or Axel will bring a song they’ve written and it’s maybe more or less flushed out, but we’ll jam on it and work with it until we’ve decided that it’s ready.

If there’s something in the song that one of us is really not into, we’ll drop it or change it. The inspiration can come from anywhere, obviously, with things going on in the world there’s an endless supply of serious stuff to write about, but we also like making songs that are a bit more lighthearted and fun.

This question is more for Corey and Ryan. Does it ever become challenging to work together as brothers? Does sibling rivalry ever get in the way?

Ryan: Not at all. Corey and I actually work really well together. We’re both pretty level headed. And any disagreements that we have usually revolve around a song’s structure, or maybe a word that doesn’t fit quite right. But those usually get resolved pretty quickly, or Axe and Jonny just step in and fix it right up. Plus I’m more handsome.

Corey: Yeah I mean there’s really no rivalry between us. Rivalries seem to stem from big egos, but he and I have different strengths that work well together. Plus he’s less handsome.

What is your writing process, does one member of the band write the majority of the music or does everyone bring something to the table and collaborate to get a song on paper?

Ryan: Generally Axel and I will write on our own time and bring our ideas to the band. Sometimes we’ll just have a riff or some lyrics, or occasionally an entirely flushed out song in our heads.

We’ll roll it out with the boys and see what sticks. If everybody is stoked on it then we usually throw it at the center of every practice. This was generally our writing strategy for the first two albums, but without playing shows this year we’ve been a lot more collaborative as a band.

We just go into practice and throw 40 minutes jams at the wall, and maybe 10% of it we’ll really like and decide to build a song from it. There have only been about three songs that we’ve written as a whole band – lyrics, music, and all. And we tend to find that those have been our best songs. So we’ve been gravitating towards that strategy lately.

You’ve had the opportunity to play in some legendary venues, such as House Of Blues, Ace Of Spades, and The Viper Room. What has been your favorite performance as a band and why?

While all of those venues hold a soft spot for one reason or another, collectively the favorite would be Folsom Live, which was one of the earliest Festivals we played. The biggest part of that gig would be the “Battle of the Bands” competition that we won in order to even play it.

It was one of the first times we really saw the music resonate with a live audience, having people jump around and have a blast; to have them vote for us as the winners were just the cherry on top. Also, it was only like Jonny’s third show ever!

We also have a soft spot for Ace of Spades. It was a great night with a packed house and even though we were opening, we had never played to that many people inside a venue and the response we got from even just walking out on stage was overwhelming.

And of course, getting to play The Viper Room was incredible in itself because of how many legendary acts have shared that stage (and drum kit) before us.

What has been the hardest part of being a band in today’s music industry?

Honestly just vying for people’s attention. There are so many bands and artists out there that are making great music, and so many different streaming and social media platforms to keep up with, you’re always hoping to have one song hit somewhere with someone.

But on the flip side of that coin is that music is a lot more accessible nowadays. Easy to make, easy to listen to. So we’re optimistic about the industry in that sense.

What are you most excited about as a band for 2021?

With the world the way it is right now, there will be this level of uncertainty that will follow all bands into 2021 we’d imagine. I think, like a lot of groups out there, we’re just excited at the prospect of live music coming back.

We’ve had an absolute blast recording new songs, being creative through our video content, and revitalizing our online presence, but there really isn’t anything in this business that we love more than playing for the folks who support our tunes.

What legacy do you want Bad Mother Nature to leave?

We want to be remembered as a band who really tried. Who really gave it their all. This past year, even though we couldn’t play live shows, we recorded an album, released six singles, filmed, edited, and released music videos for five of them, and are currently working on new material. I’d hope that people could look at us and even if they weren’t fans of our music, they’d have to admit we worked as hard as we could.

We’ve always wanted to write music that could contribute to this great and unwieldy medium of an art form. Even if one person hears one of our songs and learns it on guitar or piano, and that makes them better or more versatile somehow, then we’d be stoked. Also, having music that outlives us is a great legacy to leave behind.