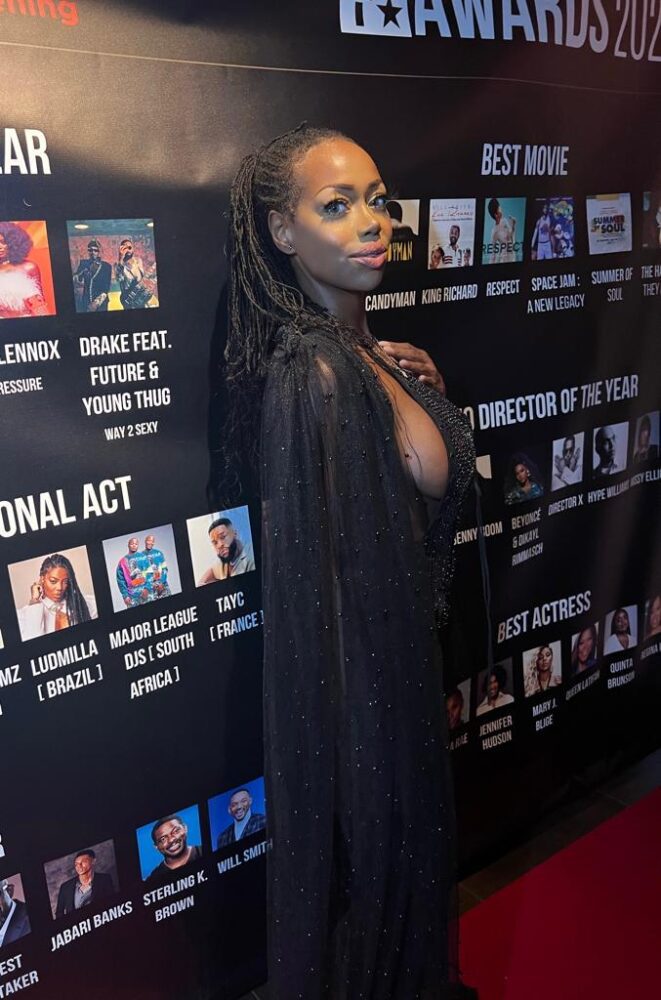 Notable Nigerian American Afro-Trap star Amaka Kai’ro, is known as the First Lady of Afro-Trap. Her music is played on radio stations throughout the world. Her notoriety in the music business is her claim to fame. She’s worked with other Afro-beats artists such as Wizkid, Burna Boy and the late Sound Sultan.

Amaka has graced red carpets around the world.  Her usual red-carpet looks are by Versace, Vera Wang, Givenchy and similar celebrity designers.  During a red-carpet event for the BET awards, Amaka wore Shawnte Elizabeth.  Who, you might ask?  Shawnte Elizabeth, a Los Angeles based designer that works globally.  Although the name may not sound familiar, she’s dressed Michelle Williams, Tamar Braxton, Eva Marcille and even Chaka Khan to name a few.

It appears Amaka Kai’ro has jumped on the bandwagon of celebrities wearing and supporting unknown but amazing designers.  The look was a sparkling all black number that featured a full-on cape.  That’s not a typo, a cape!

The G-string ensemble crossed behind the neck and showed underboob.  The piece almost looks like an outrageously fancy swimsuit with a cape.  Amaka looked like a fabulous superhero warrior.  Designer Shawnte Elizabeth didn’t disappoint, even the cape was stoned in diamonds.  Diamonds and straps throughout the entire number.  The cape flowed gracefully down the red-carpet, the entire thing was aw-inspiring and amazing to see.