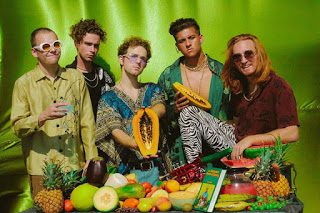 Winners of the Ryan Seacrest YouTube Original, Best.Cover.Ever performing with Jason Derulo, this rising band hailing from Orange County, California is taking their music to the next level with a new seven-track EP titled JUGO. The album showcases maturity in songwriting, a rhythm section with a deep pocket and impressive Falsetto vocal acrobatics from front man Matt Isaac.

Working with renowned musician and producer Dem Jointz, JUGO is released in tandem with new original single “U” inspired by the soulful vibes of classic 70s artists imbued with the high energy funk, soul and hip-hop dance sounds that have become their unmistakable mark.

“Our song “U” is a tribute to those legendary funky artists whose music continues to get people moving! It’s our own unique twist on that old-school live funk band sound. “U” is special to us because it holds true to our roots of music, and we hope it may stand the test of time much like the songs that inspired it,” said Matt Isaac, lead singer.

The EP is available on Spotify, SoundCloud, and other top digital streaming platforms. Listen now to new single “U” at: https://open.spotify.com/album/2lmP1Rcf96Ba35fvNd6GNa

Undecided Future will be performing songs from JUGO live at upcoming gigs across Orange County and Los Angeles. Check their website for dates and more details at www.undecidedfuture.com

At first glance, you might be expecting a characteristic boy band clone, but Undecided Future is an outright creative-driven funk and hip-hop band with smartly executed undertones of 70s funk, Hip Hop and R&B. Their sound is making a rise in the music industry, getting radio play, prominent publication features – and landing a winning spot on Ryan Seacrest’s YouTube Original, Best.Cover.Ever. where they were chosen to perform in a video with Jason Derulo – the video pulled over 7.5 million views.

For the last five months, Undecided Future has been recording and producing the seven-song EP JUGO co-produced with super producer Dem Jointz who has worked with Christina Aguilera, Rhianna, Janet Jackson, Howard County, and rapper K.A.A.N. He also contributed music to the documentary miniseries “The Defiant Ones” focusing on the partnership between Dr. Dre and Jimmy Iovine and which took home Best Music Film at the 60th GRAMMY Awards on Jan. 28, 2018.

Wake Up! Music Group Announces Matt Warren’s“Music Is My Life”
Through Injuries and Introspection Comes An “Angel”
Advertisement