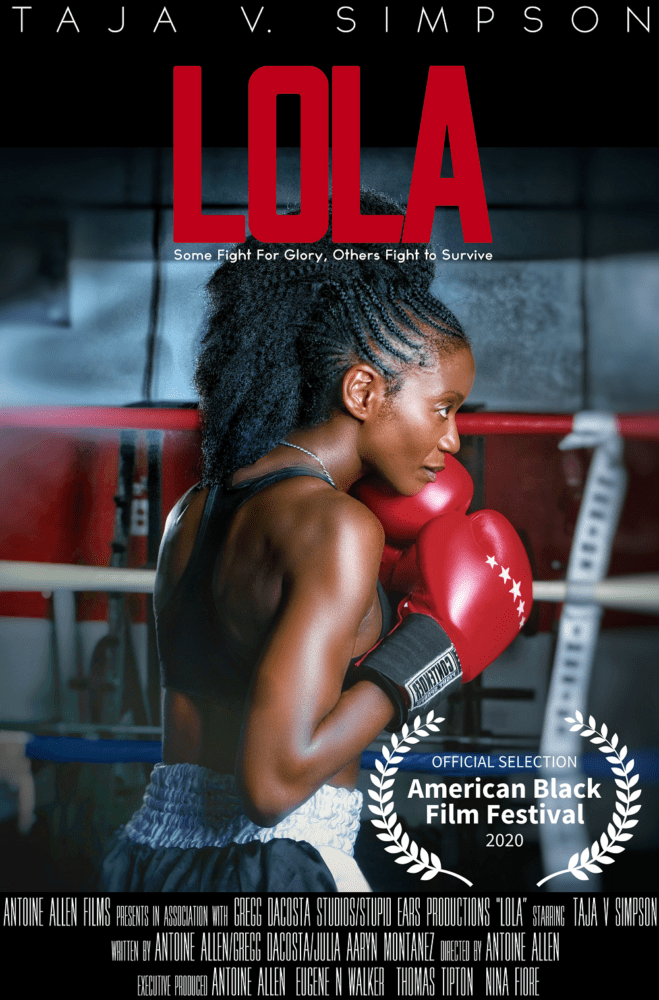 A motivational story of a Black – American female boxer who faces great challenges after being victimized and ends up in Great Victory. By Award-Winning Filmmaker Antoine Allen!

Antoine Allen is an award-winning filmmaker who aimed at pursuing his dreams in the film entertainment industry and a great inspiration to the people around him and his entire community. He has greatly realized most of his dreams. Some of his well-known films include DRIVING FORCE and LIFE IS TOO SHORT.

Initially, the production of the movie Lola was scheduled to go into production in January 2019 but had to stop production because Antoine Allen the movie director had serious health problems and medical check-up that almost cost him his life. In one of Antoine Allen’s words, he said “health is wealth”. Immediately Allen got better, he was able to complete the movie in the month of May 2019.

Summary of the movie LOLA

Set apart by an extreme trauma that turned Lola’s life falling off and caused her to feel vulnerable. Presently like never before, Lola greatly needs comfort and she discovers her new and life-changing talent in boxing.

Lola’s credit goes to her team of encouraging and kind-hearted trainers. With the challenges that came her way Lola finally got the chance to do boxing which was her hidden talent and thanks to her determination. This finally puts Lola in a position of victory and power despite being victimized.

Lola is an astonishing and motivational movie combined with scenes of non-acceptance, trauma, violence, hate, suspense, trauma, and assault. The film Lola has an outstanding moral story and a great message that it conveys to the entire world.

A key and striking scene in the movie where Lola’s life changes are her ultimate battle which was her ultimate challenge however Lola emerged victoriously and gained a powerful voice to stand for all young girls who are victims of circumstance. Hence this greatly shows that hard work, consistency, and determination equal victory.

If you find interest in women empowerment ideas, motivational story, positive driving force, suspenseful scenes that keep you wanting to watch more, and learn, then the movie Lola is the right movie for you to watch.

The producer shows us that our past doesn’t determine what lies ahead, it shows us that we all have weaknesses and shouldn’t get comfortable with them, and we have to fight to change the whole story.

The author uses a boxing background to come up with a great piece of a victimized woman that goes through hard times and bad days and emerging victorious as a female boxing champion. The film Lola is an excellent booster and source of inspiration and empowerment of any young girl who has been defiled before to stand up like Lola and tell a positive picture of their individual story.

In regards to the background music of the movie Lola, Mark Bos music creates and amplifies emotion in the movie. It helps shape emotional responses, creates a rhythm to scenes and segments, and comments on the action of the movie.

Some beautiful scenes in the movie include the beach where Lola and David had several fitness sessions. The filmmaker’s choice of color for the movie was perfect. This is simply because the coloring did not match any natural skin tone or hair color which is a hundred percent credit to the filmmaker choice of color. Equally, costumes were on point too, and matched every scene.

The cast – Lola (Taja V. Simpson) David (Merson Narcisse), West (Westley Artope), John (Nakia Dillard), Diane (Marishka Phillips) – Each and every character in the film played excellently well in regards to their specific role. It’s clear that Lola the key player of the movie just sold herself more and has greater chances to become an outstanding celebrity all thanks to filmmaker Antoine Allen with this awesome content.

Catch the latest must-see movie, “Lola,” by Antione Allen, at this year’s American Black Film Festival. The festival is scheduled to take place online on August 21-30th at abff.com.