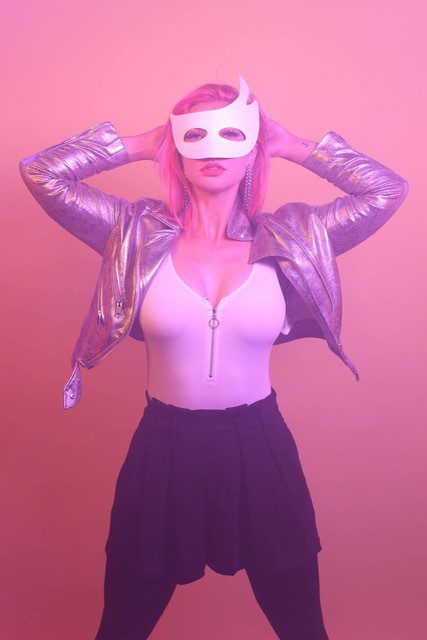 Electro-pop artist Madam Bandit, aka Mindy Gledhill, dropped her new single/music video, “Gin & Tonic,” just a few days ago. The track provides listeners with a foretaste of her forthcoming EP, Punch You In the Face.

Madam Bandit explains, “My husband loves a good gin and tonic. In fact, it’s his favorite cocktail. It’s somewhat strange to be writing these words because we were married as young Mormons who held fundamental beliefs about abstaining from alcohol. That belief system fell apart for us as we entered into our adulthood and when it did, the wonderful world of mixology fascinated us. I think of us like a gin & tonic — on our own we are two very different drinks, but together we are quite something.”

Growing up in NorCal, part of a large family, members of an early American-Christian sect, Madam Bandit was surrounded by music. Later, she married young and was encouraged to start a family even though she wanted to pursue a career in music.

Determined and smart, she did both. At the age of 22, not only was she the mother of two, but she was recording her debut album. Further albums, released as Mindy Gledhill, led to brand placements and featured music on television shows. She amassed millions of streams, as well as millions of video views, followed by being featured on four of Kaskade’s songs.

With “Gin & Tonic,” Madam Bandit struts her plush voice and her songwriting gift.