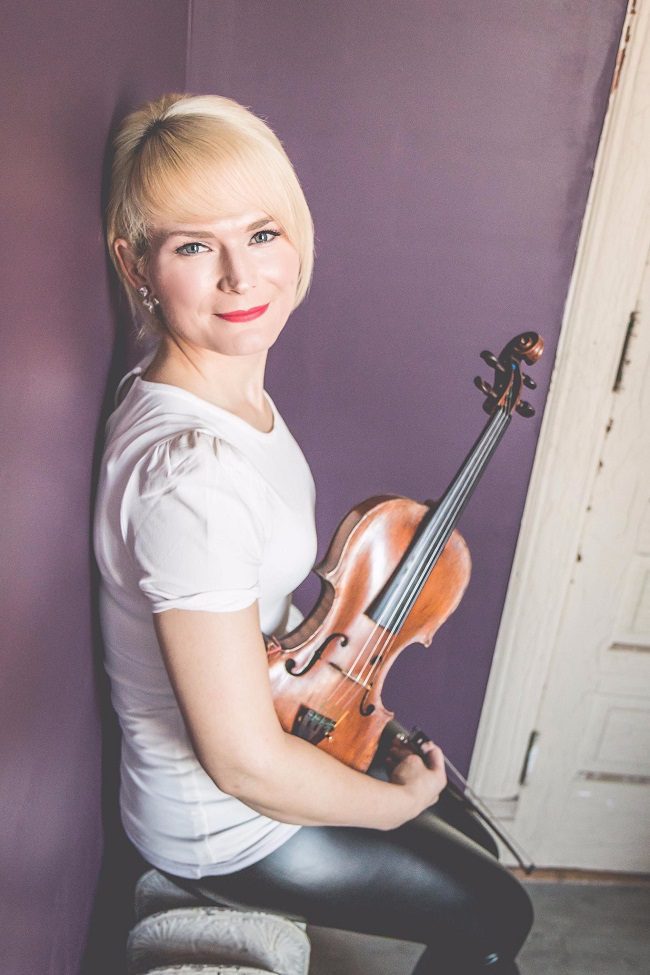 Celebrated for her “sensitive and soulful interpretations” and “a tone reminiscent of the greats of the past,” Casey McGrath has established herself as a versatile solo artist, chamber musician, and fiddle player in classical, popular, tango, and rock.

​A graduate of the Cincinnati Conservatory of Music and the University of Illinois at Urbana-Champaign, Casey holds both a Masters and Doctoral degrees in violin performance.

After serving as an orchestral concertmaster and soloist for nearly a decade, Casey now brings her love of classical music to the pop world, infusing her covers of rock, dubstep, folk, cinematic pieces, ballads, and tango classics with technical flash.

Fiddlerock! was born from the fact that I’ve always referred to my violin as my fiddle, even when the bulk of my performance life was in the classical world. To me, it kept the mood of my practice sessions lighter and the spirit of performances less formal.

I’ve loved playing my violin from the second I brought it home after my first beginning orchestra rehearsal. There was just something that captivated me about spending time with it. Until late high school, I was trained exclusively in group settings like my school orchestra and a local youth symphony.

I was very sheltered from what being a violinist full-time would actually require of me… not that it would have deterred me from committing myself to a life in music, but I think the naïveté of making that decision when I had no idea what I was up against only reinforces the fact I truly believe it’s my calling.

I’d spent about ten years playing professionally when I decided to pursue becoming a licensed skydiver, and after playing for my friends at Skydive Chicago, I realized that I had more fun playing more pop violin songs for them than I did a solo on concertos or playing Brahms symphonies.

So, I brought my classical training into my arrangements of pop and rock covers, creating what I think is a good fusion of technical flash with accessible, recognizable favorites. It’s a novelty to hear a rock classic through the language of the violin, and the positive, energetic reception of the crowd was something that made me realize the potential of making my covers into a stand-alone show, which is where “Fiddlerock!” really got its start.

I think the greatest challenge is knowing what direction to pursue. I had been on such a single-minded track of audition prepping with the hopes of a full-time symphony job that realizing some time ago that I no longer wanted to pursue that dream was both exciting and terrifying.

I suddenly had so many possibilities to consider, and I was also stripped of the safety and comfort of the identity of this lifelong dream. It’s been an amazing opportunity for growth, and the fact that I am relentlessly driven, a perfectionist (to a fault, probably), and the fact that my heart is so deeply committed to my work makes finding my way, even if eventually, a certainty.

I am currently working on my first studio recordings, one of which will be released soon: a violin and piano version of Radiohead’s “Creep”. I also really love my rendition of Lynyrd Skynyrd’s “Free Bird” and some other pretty famous guitar solos that I’ve transcribed and arranged for violin, so I’m looking forward to recording and releasing those soon, too.

My boyfriend and sound/light/marketing/life partner, A.J. Meeting him was part of what inspired me to pursue this path, to begin with, and he’s been my greatest support and biggest fan.

We literally put on Fiddlerock! together: he does all my sound and light for every performance, designs graphics for our shows, among a million other things

I keep my Facebook page pretty current: www.facebook.com/mcfiddlerock, my Instagram is mcfiddlerock, and you can also hear me by checking out my first studio release, “Fiddle Rabbit”, which is a violin tribute to Eminem: https://www.youtube.com/watch?v=_6QKr1ZFBzA