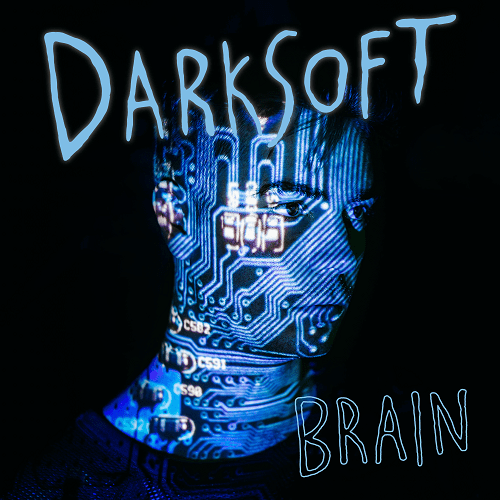 Originating out of the tech-driven mist of the Emerald City, a city in constant limbo between digital futurism and watery introspection, Darksoft naturally materializes as a half Steve Jobs, half Elliott Smith, a sensitive mastermind poised to haunt your digital and emotional mainframes. As a kid who grew up with a software company in his basement in a house surrounded by evergreens while grunge ruled the streets, Darksoft reveals his roots in this in-between with his 90s sadcore communicated through the language of computer viruses, algorithms, and human emotion pure enough to pass the Turing Test.

Bill Darksoft leads the Darksoft project and runs Look Up Records out of Georgetown, Seattle with a studio at the Old Rainier Brewery. He studied creative writing at the University of Washington and has played with many Seattle acts over the years. In his downtime, he likes to look up at the sky and watch planes fly into Boeing Field behind his house.

Seattle. Well technically Issaquah, a suburb outside of Seattle whose claim of fame in the indie music world is that Modest Mouse members grew up there. I love the Pacific Northwest, the trees, the mist, the air, hiking, the zen grey overcast. I’ve traveled a bunch but never felt like leaving.

How did you come by your stage/band name?

Because I love a nerd and we do things together. We also like naming things. I guess you would say we’re into hygge but we don’t call it that. We call it “cozen” and have blankets we call “secret soft.” So, when we played World of Warcraft for a couple months our dream was to have a guild called The Soft Embrace and secretly recruit members with our undead characters. That never happened as we stopped playing way before that, hah, but Darksoft was my chosen character name and it stuck.

She’s the white witch and I’m more on the logistical side, I guess we balance each other, if we were a yin-yang she’s the white and I’m the black. I’ve used Darksoft as my stage name for a couple years now. I like it too because it evokes images of hackers, the dark web, software enterprises, etc. My album Brain pulls a lot on those themes. By day I’m a tech journalist and follow a bit of that.

It’s interesting to see that the music industry is growing for the first time since 2000. And that’s due to streaming. People with any sense aren’t bootlegging anymore because Spotify/ Apple Music has everything ready to go and it’s super affordable – finally, the user experience is RIGHT. Looking back, the idea of buying MP3s over the internet and curating your own iTunes library was such a joke. That was sort of where I entered things.

Now in 2019, I think the issue is payout to artists is still too small, and those platforms should increase their subscription rates to account for the discrepancy. The music industry does seem fractured – there’s a smaller A/R presence than say, the 70s or 80s. Large labels still have monopolies, yet their hold is dissipating in the wake of artists/indie labels having all the tools they need at their disposal. (Which is partially why I started Look Up Records in 2017). It’s a really exciting time to be involved honestly. There’s a lot of opportunities, especially if you can think of ways to disrupt the norm and get out of the box of what is “expected.”

My parents. My dad is a pianist and composer, and my mom is a cellist. Growing up I listened to his demo tapes from the 80s in my basement and ran around singing his songs. He also had a lot of social justice undertones in his music, which I think instilled this idea that music can have a really big impact on people’s outlook of the world.

My mom had cello students to the house every day, as that was and still is her main profession, so music was everywhere constantly. My parents helped fund my piano, trumpet, drums, and vocal lessons. They’re also both very entrepreneurial and have accomplished a lot in their lives. I owe a lot to them both, they’re awesome.

People can listen to Darksoft on Spotify, Apple Music, and all major platforms. To support the project, please purchase CDs/Tapes here on Bandcamp. Please follow @DARKS0FT on Instagram / Twitter / and or Facebook. I’m in the process of recording a new album! Other than that, I’m really dedicated to growing a local community in Seattle. I manage the label Look Up Records, and in 2019 I will be adding more acts and publishing more music through that channel. I’m also working with a team to hold festivals; our next one is Look Up Fest: Underwater, a one day/11-band/2- stage fest held in an experimental art space in Georgetown, Seattle. Our lineup will be announced on Jan 13th.