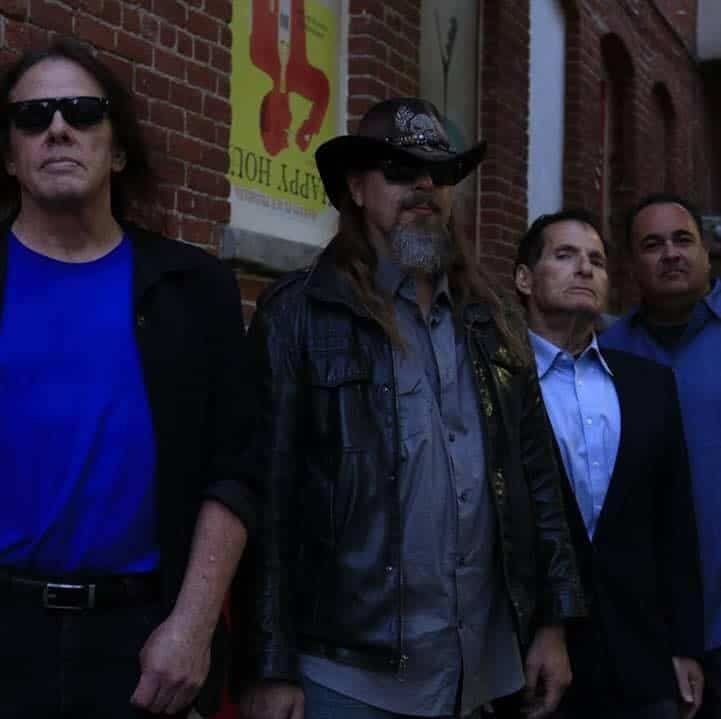 Tell us more about REVILUTION. What motivates you to write and share your musical talents?

Dan Seitz, vocals/guitar: All my life, everybody around me told me I couldn’t do it. So, I immersed myself in all kinds of music, took piano lessons from my grandmother, guitar lessons in high school, taught myself to play drums and bass in my 20s, and read voraciously, which helps me write better lyrics. I have something to prove, so, how you like me now?

Scott Flint, guitar/vocals: For me, it’s knowing that the songs that we write are going to sound great because the band gels so well together.

Marie B, vocals: My motivation for writing and sharing my musical talents are to highlight the sounds for the band and make rocking songs that speak to listeners. As close as I can articulate. You know, why do you breathe? To get air. Why do you climb the mountain? To get to the top.

When did you know you wanted to make a career in music?

Dan: Seven years old, my dad brought home an 8-track of The Beach Boys’ “Endless Summer.” The energy of that music and the thought of millions of adoring fans enjoying it got into my head and wouldn’t leave.

Scott: I knew at a very young age that music was my career; my whole families were musicians and full-time music educators.

Marie: Wow, I guess I didn’t know I wanted to make a career in music, As I got older, people would randomly think I am in a band. I’ve always sung, and vocals are a family trait on both sides. I wanted to be a businesswoman, so I discovered a talented individual. In promoting him I ended up singing. I’ve always acted and modeled, so I guess the recipe is just there? Before I knew it, I was the only one available to be a character in a music video. It’s kind of just ended up happening one thing at a time.

Please describe a real-life moment that has inspired your music.

Dan: Writing a song with Phil Soussan at Rock and Roll Fantasy Camp. Seeing and learning his style, his chord formations and progressions, helped my music writing immensely.

Scott: It was at the first California Jam at Ontario Motor Speedway. I worked on stage pulling video cables for one of the camera operators the whole event, so I had an all-access pass. And watching all the talent and the music production, and dedication it took to make it all work is what inspired me to work so hard at my own music.

Marie: I never learned to deal with events that occurred in my life as a child. So, I thought back to a moment I’ll always remember when my dad left. Dan suggested I simply write what came to mind and I did. Then he made it into a song.

What memorable responses have you had from your audiences?

Dan: I like it when people run up to take pictures of us or comment on our songs or gear. It’s gratifying just to be noticed at all, but to have people really express their enjoyment like that makes it very memorable.

Marie: Probably the first real fan memory-type moment created by our band was through That Metal Show. Dan had gotten a tattoo of the logo because we had been chosen to be audience members during a taping. A guy had just watched that episode and then come to watch an open-mic thing where Dan and I happened to be performing.

What would be your dream musical project to work on?

Scott: Recording and producing a live album from our world tour.

Marie: My dream musical project would be a movie. Movies are great promotions.

Dan: I’d like to write a serious original rock and roll movie or play. I’m so sick of all these productions that just make a mockery of the music, the bands, the crap that we go through to get heard. I mean, I like a comedy as much as the next idiot, but I feel like all these funny takes on rock and metal like “This Is Spinal Tap,” “Airheads,” “Rock Of Ages,” have kept people from taking the genre seriously. (To be fair, I like two of those movies; can you guess which two?)

As a rock band out of the Los Angeles area, how do you see the future of independent music?

Scott: I think it will continue to grow a while longer, but I also have a feeling that corporate labels are going to come back with a vengeance.

Marie: Well, everybody’s doing it now, it seems, so it’s impossible to say what the future holds. There are too many factors not related to music that affect it. Like, who would have thought that Star Trek would influence the design of personal cellphones?

Dan: Making an album and getting a record deal.

Scott: Touring, a new album, and touring. Did I mention touring?

Marie: I’m most looking forward to my adventures with the band. The fellas are great to play with. The whole Oreo cookie adventure in Denver last year will always be a good one. When something must get done, we figure it out together.