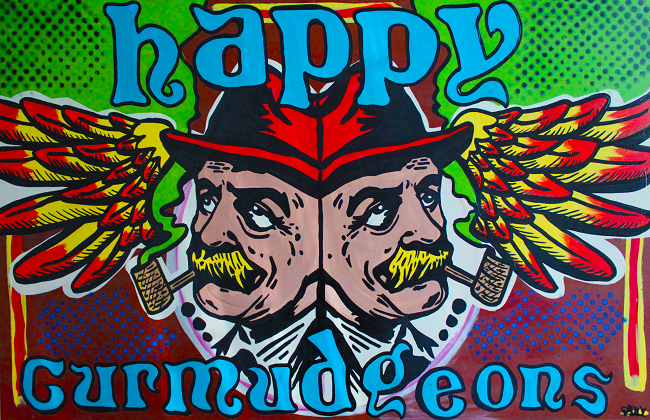 Where are you located?

Well, we are a group of studio musicians that Dave Hamilton put together to record Meant 2 Be. Most everyone that played on the album is from the metro Detroit area.

How did you come across your band name?

Dave Hamilton and Stu Cameron were writing Carnal Boogie together.  They were discussing names and Happy Curmudgeons came up in the conversation.  “What type of audience will come to see some Happy Curmudgeons like us?” and the name stuck.

Who influenced you to become an artist and a band?

Well, Dave Hamilton had the idea for the Happy Curmudgeons.  He met Lou Reed while he was minoring in music at Miami University near Cincinnati.  Dave entered a songwriting competition and finished 4th out of 89 other performers.  Lou told him to stick what he was doing and he would find his audience and they would find him.    He also met Neil Young around that time.  Neil told him to make every show count.  He said it does not matter if you are playing for 1 person or 1000 people, put everything into your music all the time.

Would you prefer to be independent or signed to a label?

Both situations have advantages and disadvantages.   We have been doing everything independently so far.  It would be great to see what a label could do for us, so we could focus more on the creative side of our music.

What are you currently working on now?

We are working on our second album with producer, Mark Byerly (Bob Seger Band).   We are playing on releasing a single in the spring of 2019.  We are planning on having 10 more original songs on the next album.   People can listen to Meant 2 Be in the meantime on iTunes, Google Play, Soundcloud, Reverb Nation,  and Amazon. CD copies of Meant 2 Be are available for purchase on Amazon and it features the amazing artwork of Pauly M. Everett.

I did my undergraduate work at Miami University and minored in music.   I studied guitar with Jim McCutcheon and electronic music while I was there.  I played in several cover bands, but I always wanted to focus on original material.  I began playing for radio and tv commercials and realized music could be a possible career.  I got my first guitar when I was 8, but I did not start lessons until I was 12.  I have been playing ever since then.

Do you feel that the industry needs more artists like yourself?

I focus mainly on classic rock, contemporary folk sound.   I think there is a potential audience that craves live music and wants to hear musicians play their instruments.   Less production and more pure quality of music is extremely important to me.  Too many times people and groups come into a room and overplay instead of connecting with the audience.  I want my music to be an enjoyable, spiritual and possibly healing experience.

Who do you feel are the best singers?

Amy Dixon-Lavery is my favorite singer and that is why she was brought in to sing with the Happy Curmudgeons.  She will be doing a lot more on the next album.  Marlow Ray Morgan is another singer with perfect pitch and great range.  Marlow did the vocals on Burn Sugar Burn that can be found on Meant 2 Be.

I just want to be satisfied with what I am doing musically in every aspect.  My simple goal is to play music that pleases my soul.  If I can write and play music I like, I think I can find other like-minded people who will enjoy what I do.  Like any job,  if you are going to do it – Do it right!

What was your biggest risk so far that you have taken in your career?

The amount of money that was put into Meant 2 Be.  Music is a labor of love, but it takes a lot of cash to do it correctly. You cannot cut corners, or it will come out on the final recording.  It takes chemistry and a bit of luck to make everything come together.   Independent artists need to budget for the studio and for the advertising they will need to do for their project. You need funds and the right people to help grow your fan base along with the proper media outlets.

What artists gave you your musical aspirations?

Bob Dylan is definitely my favor songwriter, so he would be at the top. Jerry Garcia and Robert Hunter are both just simply amazing and together there is no better songwriting team. Lennon/McCartney and Jagger/Richards are very strong influences as well.   Everyone knows how great Jimi Hendrix was as a guitar player, but his lyrics are extremely moving.   Jimi is the one musician I wish I could have seen. George Harrison, Tom Petty, Neil Young, David Byrne, Lou Reed, David Bowie, Jim Croce, Eric Clapton, Van Morrison, Donald Fagen etc. and so many more have been an influence on me.

Well, I did reach a personal goal just by having Meant 2 Be released.   Now, I want to create more music with people I love and respect.  We are starting to find our audience and I would like to have that relationship grow into a reciprocal form of energy.  I love working in the studio, but you can find true magic while performing live.   I want to give back to music what it has given to me.