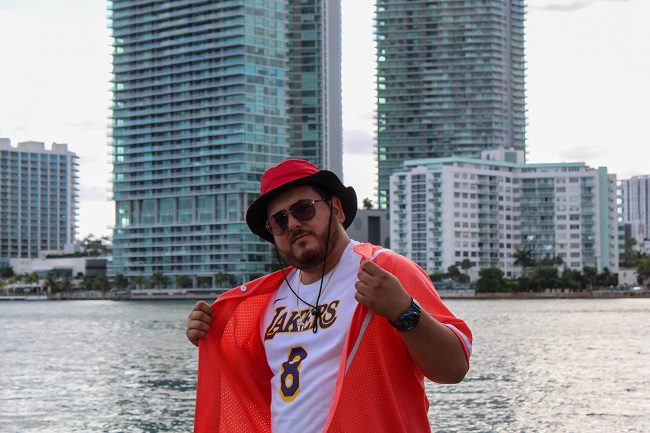 Born and raised on the south side of Brooklyn, NY, Sean Levine (King Soloman), founded a deep connection for music at a very young age. In the Spring of 2012, both Sean and long-time friend, Producer Tariq Allen, began to create catchy beats whilst recording at their school. After months of dedication, Sean Levine grew to be; King Soloman.

After leaving the “Brooklyn life” and moving to Miami, King Soloman was put on a hiatus, leaving behind a lot of unfinished music. By the Summer of 2015, he stumbled upon the local music scene in South Florida, putting his passion back into overdrive.

After years of hard work and reconnecting with Tariq Allen, King Soloman was reborn. In his work, he introduces us to his creation of a boy who grew up in Brooklyn, showcasing a past of defying the odds and rising up against challenges.

I would say around 7th grade. I first started to learn how to play the drums in middle school. I auditioned for Murrow High School. I got in for music and once I got into the program, I just stuck with it.

When I realized I shouldn’t just waste my talent and not do anything. I went to school for music, I was involved with it so much and had the ear for it. I am at that wavelength and energy level.

For the longest time, I was just making music and not putting it out. Then this year finally, I released “Wish Me Well” and then after that, everything changed & I started to focus more on music.

I would say once “Wish Me Well” hit 10,000 hits and I only had 7 Soundcloud followers. When it took off like that I was shocked so I just stuck with it.

Once I realized that I don’t care what people say or think about me and I started realizing that this is what I am going to do whether people like it or not. I was always involved in music  I just never did it publicly.  I was always scared of what everyone would think. Then I got to the age where I didn’t care.

Seeing what people rap about in the mainstream media doesn’t get me as excited.  I appreciate the beats and the songs themselves because the vibe is great, but the lyrics don’t resonate with me. But I hold a lot of pride in the lyrics that I choose to use.

Sometimes I sacrifice a good beat that wouldn’t let me use a lot of lyrics. I like to make music that people can of course vibe at the club with but I would rather have someone at home with their headphones immersing themselves in every part of my music and listen to what I am saying.

I can’t give an honest answer because I am in the crossroads between going for a label and staying independent. Because when I released as an independent artist, I was thinking to stay like that but at the same time I have been thinking of transitioning to a label. Right now, I am just in the middle of it and I will be choosing sides very soon.

I feel like the beat production is at an all-time high. I think the music people are making has a great quality all around in terms of the sound. Like I said before, I don’t really like the lyrics.

I won’t discredit other rappers because they don’t have the lyrics I am looking for. But I think the artists have to focus on a more impactful sound than just party music.

Definitely Jay-Z is number one. That is just a Brooklyn native thing. I like NAS too, J.COLE, Biggie. These are the ones I started out listening to. Also 50 Cent. I think Get Rich or Die Trying was the first album I listened to.

I would say it was a combination of a lot of things. Revel Relations helped out a lot. Getting me interviews and on podcasts. Most recently, meeting Kosha Dills was a great opportunity.

Being able to vibe with him and see his experience. He puts a lot of time and effort into his music and his content. It is hard to pinpoint a lot of them. But I would definitely say right now, #1 is that the “I Need That” video came out a super fire. And if you google “King Soloman”, I come up.

The greatest attribute that I have is that I will never give up on any beat or any song that comes my way. Whether it be my song or on someone else’s. My persistence is my greatest attribute because I won’t stop until I feel that it is ready to go. Sometimes it can work for the opposite benefit and not help me out at all.

But the majority of the time, being very in love with the track I am working with, helps the development. The hardest thing as an artist is just balancing between real life and making the music because sometimes you just want to talk about certain things that are happening in your life, but it won’t be the best thing for the track.

But just finding the right balance between flow and lyrics, the overall sound and visual. I think it’s difficult when you have so many situations and you want to talk about everything but just having to pinpoint it down to a few bars.

What do you feel distinguishes you “an artist” from just a musician?

I feel I am an artist because I can paint a picture in someone’s head through my lyrics. It isn’t just a gimmick. It is actual feelings and emotions that go into the lyrics.

So if you really pay attention to what I am saying, I know you can visualize what I am going through. I feel like that really helps me stick out because a lot of artists just say stuff that is trendy and cool but doesn’t focus on the overall message.

I feel like everyone’s answer right now would be DaBaby. My number one pick would be J.Cole. I have always looked up to him and respected his songs. I just love what he gives to the music industry.

I would definitely want them to get the impression that I am good, I want them to enjoy the music. I just hope they leave in a positive mindset. Getting through certain situations and daily life challenges.

A majority of my music is fighting through struggles that come from real-life situations. I want people to get motivated with positive thoughts that can affect their life.

I would change the fact that selling music these days is more about the appearance and following. It is about the person and not the music anymore. I hope in the future we give more credit to the music itself.

Do you have other interests or talents you would like to share with us? How do you like to enjoy your relaxation time away from the music?

I can move my ears up and down. I am amazing at the piano game at Dave & Busters. During my downtime, I just hang out with family and chill with the homies. Spend some time on the beach too.

The image is to empower you, to make you feel that you are a boss in your own life. I show people that I love my life and I am happy, I want people to feel like that too.

I hope that people understand my image and do that for themselves too. Like they are holding down for themselves. I feel like I can take on bigger challenges and take on the hard grind. I want people to feel like that as well.

Right now I am just working on a bunch of singles. I have some in the vault that I will be releasing soon. Right now, I am just focusing on pushing the music video for “I Need That”. If you go to YouTube and type it in, it will come up. Follow me on Instagram for all of the updates!

I would just say to sit back and enjoy the fact that I did something with my talent. I didn’t want to go my whole life without using my talent for music. Of course, it would be nice to win a Grammy and be on Billboards,  but the truth is right now for me, I am just satisfied that I have music out there that I can appreciate and people can get motivated from.

Just think outside of the box and be creative. It is very easy to get caught up in the trends and to do what others are doing. Don’t get lost in the sauce, and be innovative. Spread your music, your brand, and who you are.

You can check me out on all social media platforms.