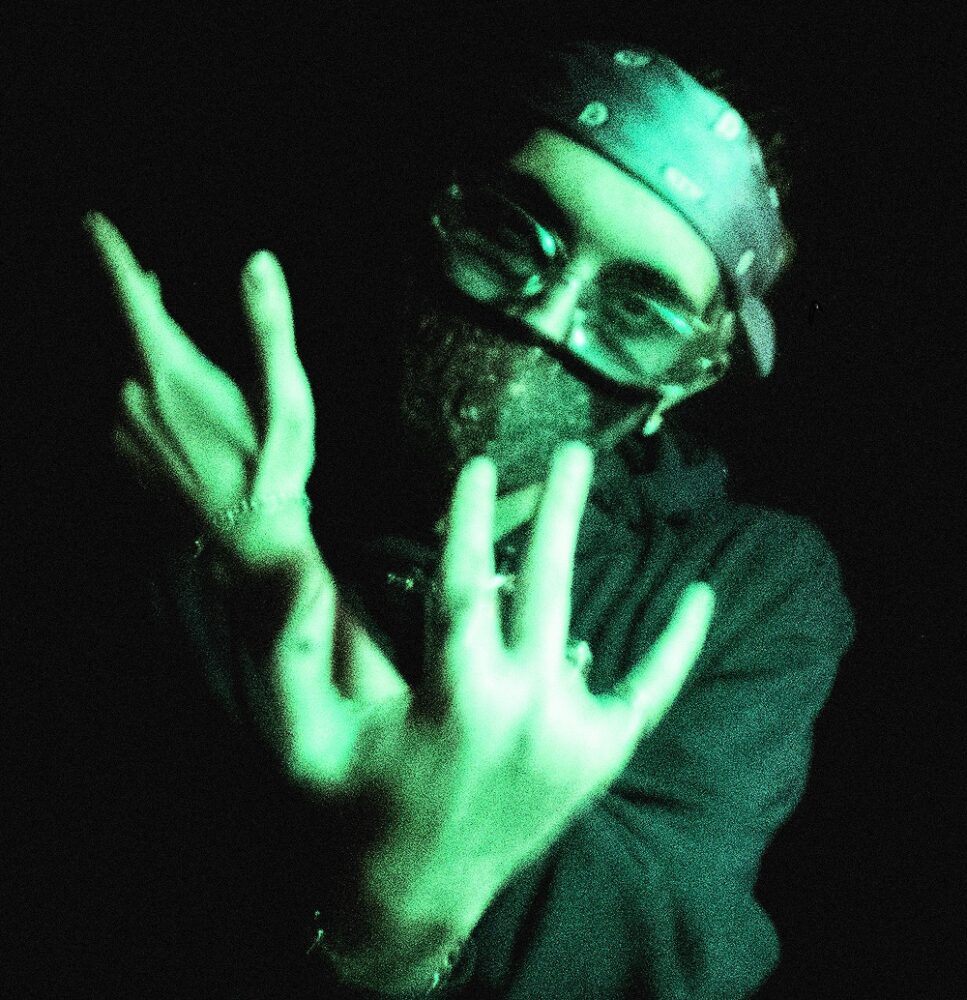 My name Grime Green came from this group me and my friends were in when I was in middle school we’d produce basically grime type beats like the genre itself yk and we’d have the title Grime in front of our names all the time as like a header and the name just stuck with me over time after that, you can see some of my old beats on my YouTube channel actually.

I didn’t want to at first, to be honest, I just wanted to produce for people but I had met this locally known producer from Hialeah and his friends were also really into art photography, etc, and pushing me to do something more than just produce. A family member in my childhood had also died a while back and was perusing a rap career his style really inspired me and made me any go through fully w everything I wanted to continue the legacy he left behind so I tried out rapping at the producer (KMLO) in his house and after he mixed my vocals I knew this is what I fully wanted to do.

I had always been in music programs at my school I was in guitar in elementary school and chorus/piano a lot during middle school but my style comes from my life between 2016 – 2018 when my mom had a pill addiction I had to live with my dad in little Haiti (Miami) for a while exposing me to the culture, I learned a lot about myself during that time but I was also doing and surrounding myself with people who didn’t actually care ab me and would kinda lowkey abuse me or clown me a lot.

Eventually, my mom got better started taking her medication and by 2018 I started living with her again I was still “on my fuckshit” as one would say though hanging out in trap houses being made fun of a lot for being like the whitest looking Latino, didn’t really pay to much attention to all of that though the some of the people I was around were also rappers among other hobbies they also pushed me one of them used a beat that I had made actually and seeing the process that went into making that music is what heavily inspired me, but eventually I had to go back to school for my sophomore year and was very zoned out all the time because of everything I had done the previous summer eventually it all went downhill fully in November.

A girl I had been seeing at the time was killed and one of my friends killed themselves this got me in a loop for about 5 months of abusing Xanax and percs on the daily it was too much, to be honest, that even today I still frequently “tweak” or scratch myself for no reason I had stopped after I got sent to one of those mental institutions locally known down here in Florida as “citrus” I realized what I shouldn’t become so I chilled out because I needed too all of this inspired me and a majority of my lyrics I wanna be a voice for misfit/hood rat type people (my people) because no one else is at the moment.

My newest single is based around club trap boom bap type music and I was having an amazing time recording it, my ep is gonna embody and bring back that era of hard loud mosh pit hip hop with some hyper pop alien type vibes I get inspiration from DMX Kanye and Izzy Osbourne with a little Eminem in there, I’ve always wanted to be on stage and have an audience just being able to have people cheering on and appreciating my art, it’s the thought of that which inspires my type of music a lot these days. I really can’t wait till covid is over so that concerts can go into the full swing because you best believe I’m gonna try to get booked as much as I can.

Flows are a strange concept that I haven’t fully learned yet I just keep on trying to make new flows all the time I need to remember how to use my original flows so I don’t run out and start so that’s pretty challenging also my job and money issues my family has become very poor because of the issues with my mom in the past I’m trying to support her by working my job at Wendy’s right now but not getting a lot out of it tbh. The greatest attribute is probably my energy in the booth my ability to stay on flow and writing it’s very easy for me to get into a rhythm these days.

Can’t say that clearly I’m pretty new to this and haven’t really fully developed as an artist yet but I think personally I’m probably the best in my town/area currently my songs are mixed super professionally by KMLO at his studio in Hialeah Gardens.

I plan to grow as much as I possibly can with any tools I can use or find I wanna make as much money I can to get my mom out of poverty and put her in a better place to live. I’m planning to work with ronnyj bighead and cash money ap for my next project maybe even get big named features if I can afford it who knows, and also I’m gonna bring my homies to the top with me and get them all out of their hoods and giving them the opportunities that I’m also given.

In particular, wifisfuneral and Matt ox I’ve talked with both of them through DMS/discord and they’re so friendly and just great ppl props to them and my local artist friends who’ve I’ve met recently are live asf can’t wait to do more features, also would like to thank my friend the first person to be a feature on my second single FRANCE who’s also my photographer @shotbyeduar aka eddywitateddy.

Don’t trip about anything nothings really as big of a deal as anyone tells you it is, and don’t be afraid of anyone or anything remember that you are your own person, and don’t succumb to bullshit in your life.