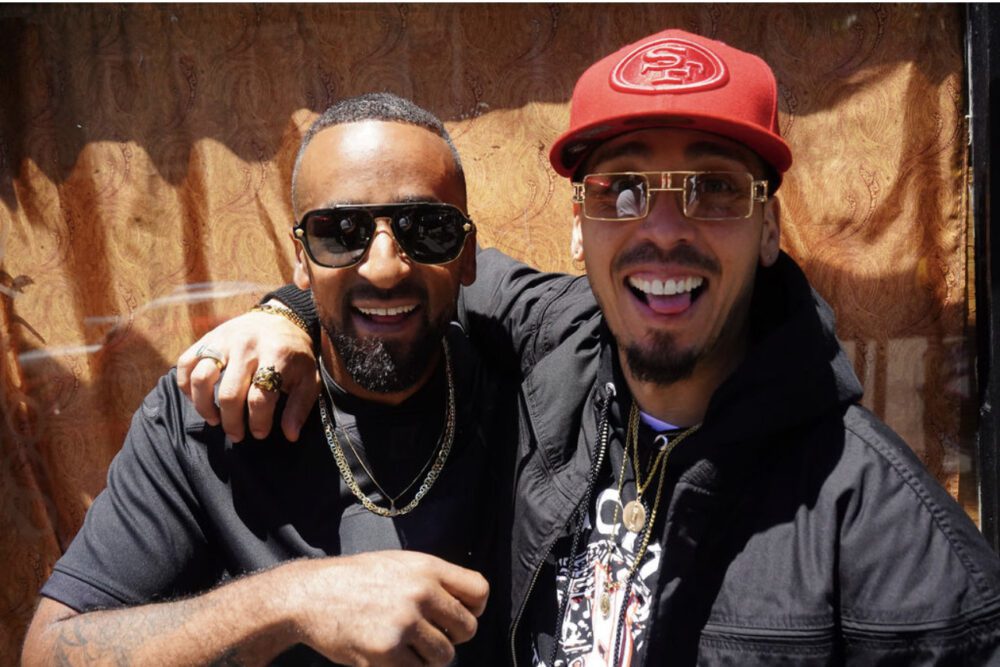 Hoodwink415
Hoodwink was a nickname given to me at an early age, in early rap cyphers, referencing to the fact that I don’t look like the typical rapper/mc/ lyricist/game spitter, as we had been accustomed to in the Bay Area.

The 415 was later added, attached to my name to further distinguish myself as an independent artist and to always keep my region attached to what I’m doing. GemCutter Records was created out of the inspiration for top-quality music. The years that me and my colleagues have spent refining and defining our sound allow us to now mine our carefully crafted musical gems.

PapiBarz
I’ve had many names. I’ve been Young Grime, S.Free, B.a.r.s, and now currently Papi Barz. Earlier in my rap days, I was trying to fit a persona as an artist that wasn’t what I was really upholding in life so the names Young Grime and Sucka Free arose from that point in time. As I got more into my craft as a whole, I took classes ranging from music theory, piano, choir, audio production, and engineering.

Because of that, I changed my name to the acronym B.a.r.s which stands for “ Beats and raps superior“ After some time under that name I decided to just make it Barz because I wasn’t really into beat making as much as writing anymore and felt I was good at rapping so I called myself what I spit, Barz.

Fast forward to me becoming a father in 2020 and due to the fact the ladies I’ve been involved with have referred to me as Papi, I put them together and Papi Barz became a thing. I think this fits me perfectly inside and out of the booth.

Hoodwink415
Ever since the first time I heard hip-hop / rap / boom-bap and the regional music that we had coming out of the Bay Areas, Northern CA. Since I heard this music as a kid, it’s always stuck an interest and an affinity for the process, the culture, and the immolation of life.

I’ve always made music and created music since I was a young teenager.  My further pursuit of the release of my music, the marketing of my music just comes from matured readiness.  Being a little more exposed to the game, knowing the ins and outs, the ease of Digital distribution; all these factors have culminated in my current push.

PapiBarz
I grew up watching my pop songs and playing the piano in church and with his own arrangement. I started dabbling with writing lyrics using funny inside jokes my best friend and I came up with when we were in high school and used to record them on a tape recorder.

I also used a free version of FL studio to make beats as time went on my pops had a stroke and ultimately stopped doing music and so the inspiration to pursue that really came to the forefront as a way for me to show him he wasn’t a failure. I want him to know he had a huge effect on my wanting to do music.

So to be able to have an actual example in my family, that it’s possible to be an artist, gave me a lot of motivation to do music, to embody myself in my music, and to have the confidence to create my own sound, style, and look.  A lot of the individual embellishments that I have or do just comes from my own creative expression. Wanting to stand out in a good way; & not blend in a bad way.

PapiBarz
Mostly pops since he raised me on good music and then of course some of the greats 2pac Eminem and J Cole just to name a few.

Get To Know Hoodwink415 and PapiBarz

Hoodwink415
Some of my closest homeboys are the Real Onez, who have an extensive catalog of music that they’ve dropped and projects they’ve worked on. On the back end of their recent project, La Familia: Heart of the Zs volume II, we decided to drop a collaboration – a street tape: Real Cuttaz.

This project is gonna feature some of the signature styles of one of the dopest duos on San Francisco, The Real Onez – and the clean, polished, and melodic harmonies of Gem Cutter Records representatives Hoodwink415 and Papi Barz.

It will be 8  -10 tracks, all bangers that you can look forward to in the early Fall, late California summer for the Bay Area. Production, mixing and engineering provided by some of the best in the business Mic Angelo, BQM, BigDirtyProductions925, and Vidal Garcia.

PapiBarz
That’s a process that always varies. But for the most recent I just tried to listen to what the beat told me and went from there.

Hoodwink415
The answer to both questions is, I’m a student to the game: so I’m experiencing constantly meeting new challenges, things to learn, and places where I have questions to be answered.  Trying to stay humble in the process, and understanding that there’s always something to learn, that there’s always places to grow, keeps me positive about overcoming obstacles, challenges, difficulties, issues, that every other artist experiences and / or personal endeavors.

Currently, I’m flip flopping between learning something new, gaining a new skill, completing or achieving a goal, and sometimes in the same day, realizing that the bar has been raised, that there is still opportunities to grow into, to expand networks, connections, horizons for myself as an artist, and for Gem Cutter Records, as a business.  Manifesting these progressions is the biggest conflict or daily experiences that contribute to my growth through the challenges.

PapiBarz
The greatest challenge is always wondering if my style is still up-to-date with times and that I don’t sound like an old fart trying to rap in a young man’s game and that I have my own unique sound.
-My greatest attribute is that I have never stopped writing. Over time I have honed my craft not only lyrically but vocally as well and I’m still currently working on it.

Hoodwink415
I’m the best at what I can do for me. I don’t believe I am measurably the best or better than anyone else in any type of category that can be written about, debated about or podcasted about but I definitely believe that wholeheartedly I am doing the best that I can do for me.

What I do and what I’m trying to do, the people that I associate with, the team that I put on for and that puts on for me: I believe that we are some of the best most underrated, undiscovered, untapped potential group of individuals trying to collectively build up and blow up together, as a unit, which is difficult to do. Everybody promotes and supports each other, we all wish the best for each other, and I think we are the best at doing that.

PapiBarz
Nah but I think I can hang with them and have the potential to be one of the greats.

Hoodwink415
4$ure lots of music, lots of videos, collaborations across the nations, possibly International cameos. Im probably gonna be on local radio stations soon. Face on billboards, internet radio, live shows across the state, soon to be nationwide. If they book me a show on the mood, I’d show up for that.

PapiBarz
To do more music-related events whatever that may be. Doing shows, attending shows, networking, working with other up-and-coming artists, building a fan base and social media following and presence.

Hoodwink415
My mom, my family, my close and personal friends, Papi Barz, any and all musicians, collaborators, musical contributors, influencers, street team members, fans or supporters that have shown love by listening to music, buying music, coming to shows, reposting/sharing on social media. Thank you for the continued support.

PapiBarz
All of the real supporters who really rock with me. Y’all know who you are.

Hoodwink415
If you’re serious about it, jump in it. The earlier you can start the better.

PapiBarz
Keep working and stay humble and your opportunity will come if you hustle hard. Stay true to yourself and have integrity because it’s scarce in this industry.